Behind the scenes on Philippe Dubuc's Fall/Winter 2010 Campaign Shoot 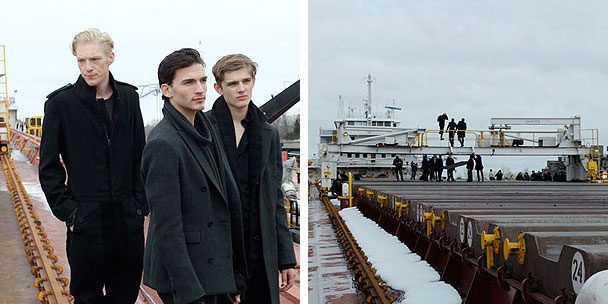 Fashion Week journalists showed up at 2 pm on still-wintery March 1 to see Philippe Dubuc’s fall/winter 2010 showing in the bowels of the Gordon C. Leitch freighter at Old Montreal’s quai Alexandria. Dubuc, photographer Martin Rondeau and three male models had been shooting in the topside chill since 8 am, working on the designer’s Fall ads and lookbook. His “Northern Sailor” collection, inspired by adventurous seafaring men, calls to an urban sailor, refined yet ready to break from city constraints. Hair and makeup artist Marco Marsolais talked to us about the look of the campaign.

“The back-story of the shoot is three well-dressed guys escaping their everyday lives, heading north, finding an old ship and trying to find a way in,” said Marsolais. The photography style is loose, no posing. Rather than contrived images, Rondeau chose to shoot reportage-style as the men explored the laker (a ship built for lake travel rather than ocean).

In contrast to the clothing’s clean, structured lines and refined fabrics, the grooming was about “kind of dirty, messy hair” and “pale, very pale” complexions. On any other frosty outdoor shoot, Marsolais would default to a thicker formula and finish to cover the cold-weather kiss of redness on noses and ears. On this day, however, he kept the finish light and sheer, so the skin looked natural as though bare. “Right now we’re shooting in black and white, so [coverage] isn’t as important — the redness won’t show,” he remarked. “But you can see the texture, the skin looks real. We didn’t want the men to look too perfect — it’s about imperfection against the perfect clothes,” he said.