Paris Fashion Week: Is it Saint Laurent or YSL?

Plus other highlights from day one of Paris Fashion Week. 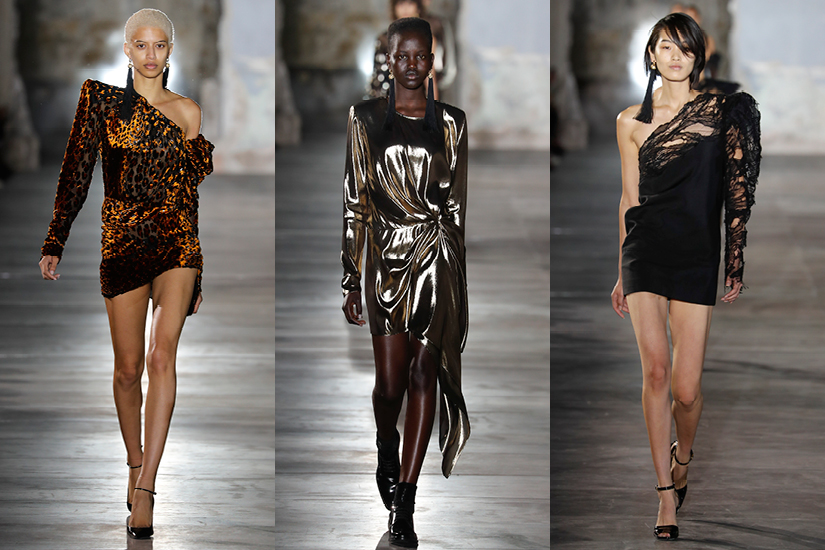 The location Saint Laurent’s show was under construction, with a massive YSL sign hanging from a crane right in front of the runway. The new YSL woman emerged as a feisty, fast-walking siren who oozed sex appeal and  brought back the ’80s. The Yves in Yves Saint Laurent is back in a big way.

The energy was electric, the music was loud and the attendees were thrilled to see Anthony Vaccarello’s new take on the brand. I could hear all the editors around me saying “this is so exciiiting”– not something you usually hear at shows, believe it or not. The last few dresses with exaggerated sleeves (taken from the YSL archives) were my personal favourites and are already on ELLE Canada’s hit list. Oh, and those shoes – with a heel spelling out YSL – are also on the list.

#SaintLaurent is about to show us a brand new world under the vision of its new Creative Director #AnthonyVaccarello – right now! Join us live on Snapchat to watch it unfold #PFW #DAY1 #Paris #YSL #entrance #underconstruction

Get to know Y/Project

The first time I saw photos of Y/Project I was hypnotized. And it happened again live at their show this season. The line to get inside the show venue was so long that even those with an assigned seat had to push their way through.  At a show like this, the crowd is cooler, and the editors are most likely there because they really want to be. The show was slotted for 9pm, but really started at 10, after Saint Laurent. If you wanted to make it to this show, you were skipping dinner. But it was all worth it. The underlying street feel was there, but this time with a hit of old-world couture and deconstructed to perfection – slashed corsets, ruffled dresses, pearls mixed with oversized denim, and tiny little hot pants (with matching thigh-high boots, of course). If you don’t know Y/Project yet, I suggest you get familiar, fast.

The scene at Jacquemus: The most beautiful faux sunset in the background, while calm, poetic and romantic models walked past me. Inspired by emblematic cultural objects embodying the spirit of the South of France (Les Santons de Provence), this show felt different for Jacquemus — models were fully dressed and there were no gimmicks, just beautiful clothes styled to perfection.

A subversive but well respected Parisian brand, Koché showed a lineup of mall-walking cool kids mixed with real people walking towards the subway – at times I wasn’t sure who was who. The clothes, however, were not confusing. Detailed, beaded and ruffled tops were mixed with oversized pants and runners, the models (a mix of supermodels like Lindsey Wixson and street cast fresh faces) walked away into the streets at the end of the show. A perfect metaphor for the fact that what we see on the runway should be that easy to wear in real life.

Anrealage: a collection in silence

Sometimes you go to shows to see the clothes, but sometimes there’s more to it. This show took place largely in silence, with the exception of a few loud noises as models walked past the crowd in sporty black and white looks. At the end, a few models walked back wearing dresses with hidden messages which could be seen only through the iPads in front of them, like an optical illusion. An interesting moment and a reminder to stop, listen and enjoy silence.