NYFW Spring 2016 diary: Besides Lady Gaga, who else did we party with?

We went to Alexander Wang's afterparty, and you'll never guess what we saw. 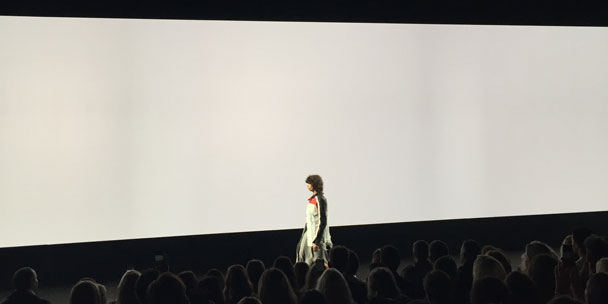 Alexander Wang, fashion’s one-two punch
For Alex, runway shows seem to be about creating a mood; a feeling of euphoria through heavy beats, cool models and edgy details with the makings of cult classicism. To celebrate his tenth year in fashion, Wang unleashed his most impressive work yet by rejecting what he classified as innovation, instead favouring the mundane, post-millennial attitude that first garnered him attention. Heading back to street wear roots, Wang mixed Western fringe, ’90s grunge and athleisure into a collection bound together with a hip-hop attitude. During the show, the bass was so heavy that one editor’s camera kept going out of focus. Studded, sashaying models bounded down the runway like they had emerged triumphant from a fight. Perhaps they had, too – fashion is no easy industry, and a decade as defining as Wang’s is one to cheer for.

Lacoste: Modular, body-loving patriotism
Lacoste gave a hint of what we can expect when they dress the French team for the summer Olympics in 2016. In the show notes, Olympian René Lacoste is referenced as stating that “without style, playing and winning are not enough,” which is a true nod to the origin of the company.

Tibi, where the cool girl gets classy
Softly draping the female form, Tibi created a relaxed elegance for spring that was a celebration of the future, all while looking to the past. Iridescent silk taffeta gathered against the body in creams, pinks and blues, while organza moved like water as models walked the runway. My favourite pieces consisted of a low-back maxi dress, high waisted cargo pant and gossamer anorak.

Herve Leger by Max Azria
The curve-hugging silhouette was preserved this season, with the addition of structured capes, leather detailing and seaside influences that still managed to exude sensuality. For the finale, each model wore an all-white look that was a reproduction of a previous collection.

Banana Republic
For the woman yearning for a touch of elegance and whimsy in her wardrobe, Banana Republic’s Marissa Webb created a collection that does just that. Luxe lace, candy-coloured stripes and beautifully curated florals were imagined in coats, pants and dresses, accentuated with shimmering baubles and brooches.

The after party
Gaga, Anna Dello Russo, The weeknd, Nicki Minaj, Kylie – you name it, they arrived in throngs to fête the young designer. The location of the soiree was revealed to us during Wang’s famous finale bow; as he neared the end of the runway, the entire back wall opened up, revealing pole dancers, catering by Hooters and the best DJ-ing we’ve ever heard. Flashbulbs burst like bubbles prior to the show, but the fanfare dissipated when guests entered the super-exclusive soirée. It was a shock to bump into someone and realize it was Lady Gaga herself; even more so when, through squinty-eyed amazement, you realized here, everyone was a someone.

READ MORE:
The best street style at New York Fashion Week
What editors are wearing
The day we met Solange Knowles at NYFW