Five Canadian designers came together for a coast-to-coast fashion show at the Fairmont Pacific Rim in Vancouver. 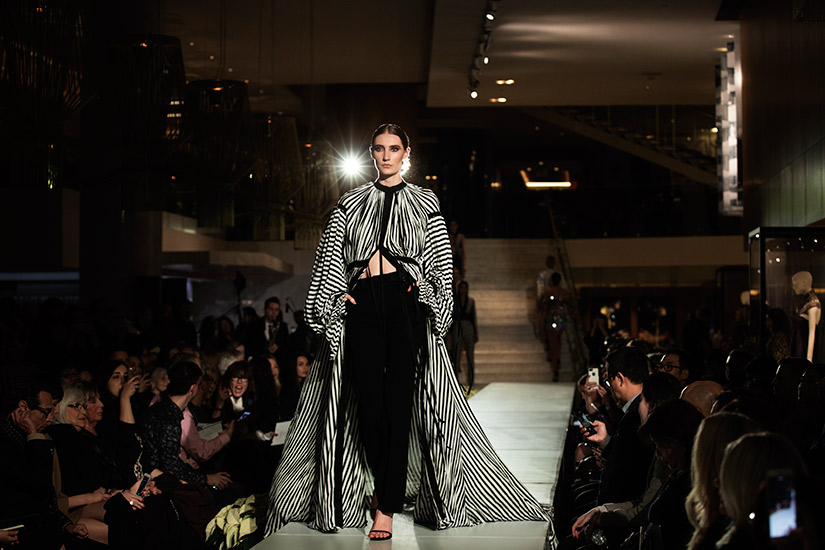 Canadian fashion is, for the most part, a city-by-city game. Vancouver, Calgary, Montreal and Toronto all have their own fashion weeks (in some cases, more than one), local industries and distinct markets driven by lifestyle and climate differences—from a wealth of outerwear brands in Toronto and Montreal to an emphasis swim and activewear in Vancouver.

So what would happen if the country’s somewhat fragmented fashion talent was united under one roof? Vancouver development company Westbank decided to find out.

The real-estate powerhouse partnered with national fashion platform CAFA, along with Fairmont Hotels,  to bring designers from all over Canada to Vancouver for a multi-brand fashion show at the Fairmont Pacific Rim hotel. The move is part of the developer’s ongoing efforts as a cultural ambassador for the city. The company recently set up a pavilion outside of the Fairmont Pacific Rim that houses an impressive collection of art and design works ranging from sculptures to vintage couture. This pop-up exhibition is called “Fight for Beauty,” and the fashion show is just one part of this artistic initiative.

The five brands that came together for the show were Toronto’s Lucian Matis (known for glam and feminine occasion wear), Montreal’s UNTTLD (led by award-winning design duo Simon Bélanger and José Manuel Saint-Jacques), Calgary’s Paul Hardy (who brought his luxurious knits and dramatic furs to the runway) and Vancouver labels Catherine Regehr and Beth Richards (known for occasion dresses and swimwear, respectively).

A look by Lucian Matis.  Image by: The Collective You

“Vancouver is a very coastal city, so we don’t have a huge amount of fashion culture here,” says Catherine Regehr, who opened the show with a collection of frothy, feather embellished cocktail dresses. “We’re very used to being on our own, but to see the harmony of the Canadian designers from Calgary, Toronto and Montreal is wonderful.”

A look by Catherine Regehr,  Image by: The Collective You

“These cross-sector opportunities are super important,” said CAFA president Vicky Milner, “It all builds awareness, has a trickle-down effect and gets people shopping.” Shopping was, after all, a big part of the project. After the show, the hotel held a trunk show allowing attendees to purchase the pieces they saw. The occasion also offered the out-of-town designers a chance to book appointments with local boutiques in the hopes of gaining stock lists on the west coast.  Even some team members from Nordstrom’s headquarters in nearby Seattle came to the show.

When asked about their thoughts on this first-of-its-kind event, the designers praised the opportunity as a chance to connect with one another. “A big part of being a designer is being isolated,” said UNTTLD’s Simon Bélanger, “this helped us to realize that we are not alone, and exchange experiences with other designers.” Although their markets may be different, the challenges faced by Canadian designers are often the same, says Paul Hardy, “it was nice to be able to share stories and give advice, and see the uniqueness based on our locations,” he mused.

A look by Beth Richards. Image by: The Collective You

For Beth Richards, the show marked one of the first times the swim label, which has gained mainstream popularity thanks to its modern silhouettes and trend-led approach, was included with fellow Canadian brands. “Swimwear is a commodity that doesn’t always get taken as seriously,” she said. “I’ve gotten more recognition outside of Canada than within it, so I think we can all be better at working together. Nights like this are a step in the right direction.”