20 years have gone by since the last big fashion event in Tel Aviv. This year, the Israeli city renewed its relationship with designers by introducing its first ever fashion week. Denis Desro, our Fashion Editor-in-Chief, was there. 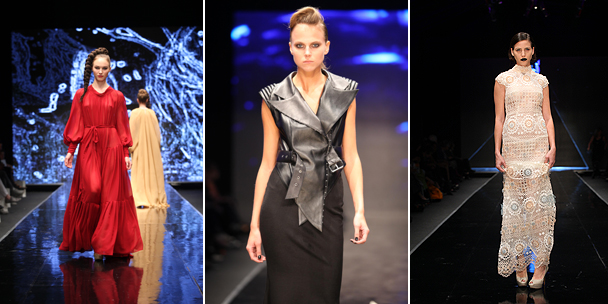 The background
Wanting to place the Israeli capital on the fashion map, Tel Aviv organized its first ever fashion week at the end of November. Having been seriously shaken by recent conflicts in the region, this event was a way to show the world that Tel Aviv was still a trendy travel destination. “In Tel Aviv, fashion is waking up. There aren’t many fashion magazines, but you can feel that the city is starting to build its own identity, describes Denis Desro, who was invited to the event. At this pace, Israeli designers are bound to be known around the world within 5 years.”

Spanning over four days, the event allowed close to 20 designers to showcase their collections. Much like Montreal’s Fashion Week, all shows took place on one runway. “Walking the runway were both internationally renowned models as well as beautiful women in their forties. Certain designers even chose to end their shows with curvy women while others opted for a very rock and roll feel as with the performance of Ninette, a well-known singer in the region. It definitely created a vibrant atmosphere!” says Desro.

Inspiration
Pervasive to the fashion presented that week is the fact that Israël is a Latin country. “Styles are greatly influenced by designers like Versace or Roberto Cavalli. It is thus no big surprise that Roberto Cavalli opened this fashion week by showcasing his own collection. The pieces sometimes had very sharp contrasts; very revealing seductive pieces mingled with much more reserved and modest ones, describes Desro. I think that there is a lot of research in the way the clothes are constructed. I also liked the details in the creations of AlonLivne – garments are carefully studied and look incredibly original. I also enjoyed the Alembika collection, with its sheer and oversized dresses as well as its squared and structured pieces that will flatter any figure.”

Let’s go back
“Tel Aviv is an eccentric city that attracts because of its welcoming weather and proximity to the water. The population is very diversified, with people from all over the world who are, amongst other things, attracted by the good reputation of the universities in the region. This makes the city very youthful, dynamic and bustling at any time of the day or night. Restaurants, bars and night clubs are filled to the brim at 2 AM, even on Mondays!” concluded Desro who was enchanted by the city. So, should we go back? “In a heartbeat!”

Get ready for spring with our Spring/Summer 2012 trend report.