Fashion luxury: The 5 most extravagant style finds of the past decade

No diamonds, no frills: these five mass-produced luxury items rely on their design to make a mark on the world of ultimate luxury. 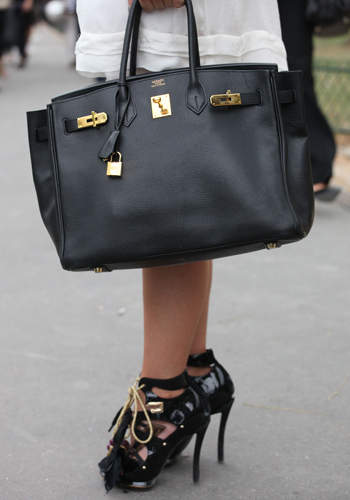 Everyone knows about extravagant items like the diamond embellished Victoria’s Secret Million Dollar Bra worn each year by the brand’s Angel of the moment, or about Stuart Weitzman’s annual Million Dollar Shoe. But once you take away the
dazzling diamonds, they just become an ordinary bra and an ordinary — albeit a very nice — designer shoe. There is also the crocodile Hermès Birkin bag with diamond encrusted hardware which can set one back up to $140,000. But even without the diamonds, a Birkin is a Birkin — it’s iconic.

While the classics may have proved their worth, how will these new-ish luxury items fare? Will The Row’s $34,000 backpack be considered a material icon 30 years from now? Louis Vuitton’s $45,000 Tribute Patchwork Bag from 2007 probably won’t, as critics slammed it worldwide. Tod’s new $4,900 Alligator iPad case has a limited lifespan too, hinging on when Apple decides to redesign their tablet. Even Manolo-holic Carrie Bradshaw would probably pass on Blahnik’s $14,000 alligator boots? And when it comes to beauty, is any
scent worth the $865 price tag allotted to Clive Christian’s No. 1 Perfume? We explore five non-couture, non-jewellery items that made the luxury industry buzz in the past decade.

There’s no denying it; this little backpack is genuinely beautiful. Its black alligator skin is contrasted with matte gold hardware holding the delicate drawstring enclosure. Even though it is more expensive than the average Hermès Birkin, The Row’s designers, Mary-Kate and Ashley Olsen, can barely keep up with the demand—this precious backpack has been selling out every since its launch.

When critics first laid eyes on this Louis Vuitton bag in 2007, there were a lot of puzzled looks. The aptly named the Tribute Patchwork Bag was exactly that: a tribute to the label’s most iconic bags, patchworked together by sewing all of them into one bag. Sounds kind of weird? Yes, especially considering its exorbitant $45,000 price. Granted, there were only 15 made—and Beyonce bought one—but unlike The Row’s slick alligator backpack, this one fell flat.

More luxurious items from the past decade on the next page…

Move over crocodile, it was all about alligator for Manolo Blahnik in 2004 when he designed a knee-high pointy boot, retailing for a whopping $14,000. These exotic skinned but otherwise simple boot topped Forbes.com list of the most expensive shoes in 2005, followed by Louis Vuitton’s ostrich knee-highs that, at $4,500, feel more like chump change in comparison.

Leave it to Italian luxury goods Tod’s to design the most expensive iPad case, using the finest grade alligator skin, available in brown, blue and tan. If this was a handbag, it would be less extravagant, but considering it is supposed to protect something 1/10 of its price, it gets a little overindulgent. Still, the design is
slick and classic, but one can’t help but wonder when its shelf life will come to an end. Apple tends to redesign its products at a rapid rate—we certainly hope it still fits the next generation iPad five years from now.

Sure, certain women may part with $1,000 for the latest
beauty treatment or cream, but shelling out a grand just to smell good is an entirely different story. But the high cost of was indeed justifiable for designer Clive Christian when he created his No.1 perfume, officially dubbed “The Worlds Most Expensive Perfume,” using the most rare and precious natural ingredients like Indian jasmine, Tahitian vanilla and Rosa Centafolia. He also created an Imperial Majesty perfume packaged in an opulent crystal and diamond bottle, currently sold for—get this—$435,000 on Amazon.com. It’s no wonder that this year, Christian was appointed Officer of the Order of the British Empire (OBE) for services to the luxury goods industry.