Make your friends green with envy in these must-have looks! 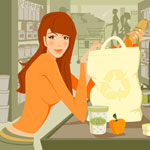 There was a time when environmentally friendly clothing brought to mind hippies in hemp-fiber, sack-like clothing that you couldn’t help but ask if they could smoke. You might buy animal-free products, but that’s about as far as it went.

That time is officially over. Environmentally-friendly clothing is officially in fashion; it’s found its way all the way up to the runway, being featured in fashion weeks in London and New York. New fibres mean that instead of undyed hemp, it’s more like organic cotton jeans, soy that feels like cashmere, and antibacterial bamboo workout clothing. Toronto had a fashion moment with The Green Carpet’s An Evening of Sustainable Style, a sold-out fundraiser for the World Wildlife Foundation this spring that promoted sustainable style from fashion designers. Vancouver followed with an event called Sustain Your Style in March 2007.

The end effect is that, from small stores to large companies, green clothing is becoming increasingly accessible and popular. Leslie Domenico, organizer of The Green Carpet Series, explains the message was to show people the convenience of many of these options: “It’s just as easy if you’re going to buy a pair of jeans to go to Grassroots and pick up a pair of organic cotton as it is to go to the Gap — it’s easy to become green, you just have to become aware of what the alternatives are out there.”

The green trend started, like all good trends do, in small labels around the country serving trend-aware urban hipsters. Stores like Pre-Loved in Toronto have long touted the environmental-friendly aspect of their clothes, which are reconstructed out of vintage finds. Labels started selling clothing made from organic cotton, like the graphic printed organic tee that gave Vancouver-based Twice Shy their cachet. (They’ve since expanded their scope, now offering things like organic-cotton denim jackets and a new children’s line). Susan Harris offers simple, slightly bohemian design from Toronto. And Covet, a Montreal line by Tara St. James, offers urban streetwear and dresses in renewable fabrics. They bill themselves as “hand-crafted redemption.”

Bigger names have also thrown their hats into the ring. Proenza Schouler designed environmentally-friendly clothing for the New York fashion Week. Oscar de la Renta designed clothing made out of modified corn sugar at the Biotech Fashion Show last year in Toronto. He was joined by the queen of environmentally responsible fashion, Linda Loudermilk. Her “luxury eco” line includes a formal gown fashioned out of seaweed.

Big name retailers, perhaps realizing there’s, well, green to be made
in going green, are now getting in on the chase, meaning that this
spring and summer, it will be easier than ever to find environmentally-friendly clothing. Levi’s has introduced an organic cotton jean and H&M has an organic cotton line as well (they’ve promised that the environmentally-friendly fabrics won’t affect their price points.) Perhaps most promising is Oquoqo, Lululemon’s new sister store, that has workout-inspired clothing made out of creative materials like shirts made out of bamboo and dresses made out of soy.