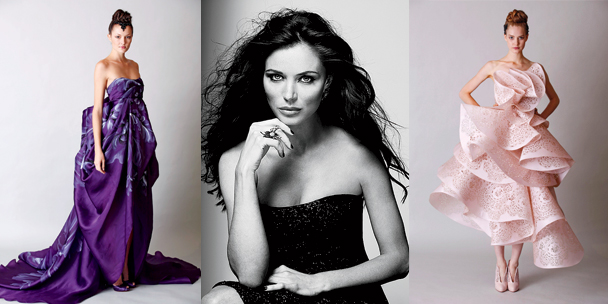 After the late fashion icon Isabella Blow wore the first Marchesa dress ever made to Paris Fashion Week in 2004, Georgina Chapman and Keren Craig knew that their designs had potential. “That was really the start of us,” says Chapman, who credits Blow with helping craft Marchesa into a brand. Yet the two friends, who met at London’s Chelsea College of Art & Design when they were just 17, always knew that they’d one day create a fashion line together. “It wasn’t a question of whether we would or wouldn’t; it was really just finding the timing,” says Chapman, who worked as a costume designer before switching her focus to ethereal eveningwear. “I think with Marchesa, you can see a lot of the costume inspiration,” she says of their show-stopping draped silk, shredded tulle and velvet gowns, which are often lavishly embellished with strategically placed embroidery, crystals and feathers. “I always found I liked taking the idea of a character and translating that into a garment.”

It’s no surprise, then, that in just seven years, the brand has built a loyal following with Hollywood’s top actresses—virtually every female A-list star has sashayed down the red carpet in Marchesa—as well as society women who like to make a statement. Toronto’s Suzanne Rogers, who confesses she owns “quite a few Marchesa dresses,” is so smitten with the brand that she invited the duo to Toronto to headline a gala fashion show and black-tie dinner on April 5 called “Suzanne Rogers Presents Marchesa.” The event is a fundraiser for the Herbie Fund, which provides financial support for children from around the world to undergo surgery at Toronto’s Hospital for Sick Children. “The fashion show will be unbelievable,” says Rogers. “The dresses are couture-like in their construction, so they are breathtaking to see in person.” So, what will Rogers be wearing? “The ladies are doing something spectacular just for me. I’m pretty excited!”

Want to know what inspires Georgina Chapman? Check out our Q&A with the designer on the next page…

How would you describe the Marchesa style?
“I really design from the heart. I design what feels right to me, not really so much with a particular aesthetic in mind. But I’d say it’s very ethereal and romantic. I’m a dreamer.”

How would you say the Marchesa style compares to your personal style; is it one and the same?
“When I design the pieces, it comes from me, but am I walking out in an evening gown every day? No. So I think it’s a translation of part of my personality. My everyday style is more practical. It can be drapey dresses or jeans and a tank—it depends on what I’m doing. For the office, I’m usually in skinny black jeans and probably a McQueen shirt. It’s a little eclectic; it changes every day.”

Marchesa is very much a fantasy brand. Do you think you’ll ever do a casual line? Something more dressed down?
“We’ll see… Who knows? When we first started, I didn’t know that we were going to be doing handbags, and now we’ve branched into that. And I never dreamed that we would be doing china [the Marchesa China Collection by Lenox] and working on a home collection [The Marchesa Collection from Kichler Lighting]. It’s very exciting.”

How do you scout out new ideas to inspire your designs?
“My latest collection [fall/winter 2011], which I like to call ‘Miss Havisham,’ came from watching TV late at night—I saw Great Expectations. It’s just one of those moments; I was watching the movie and it was so visually beautiful. So, really, it can come from anywhere. And I’d have to say our muse, Marchesa Luisa Casati [an early-20th century European heiress and arts patron who famously said ‘I want to be a living work of art’]. She is such a fashion icon. She is incredibly inspirational to us; she is our company’s namesake.”

What else inspires you? Is there a place that inspires you at the moment?
“I love going somewhere and just stepping into a very different world. I love India. I’ve never made it to Sri Lanka but would love to go— same with South America. And I’m a very keen scuba diver, so I’d like to go diving in Belize.”

Are you reading any inspiring books?
“Well, I’m reading a book right now, but I really don’t know if it’s going to be inspiring for work. [Laughs] It’s a novel called The Silver Linings Playbook [by Matthew Quick]. It’s about a guy who had a nervous breakdown and his recovery from mental illness.”

What are some of your favourite Marchesa looks of all time?
“Keren [Craig] and I feel very close to a few iconic moments. Renée Zellweger was the first celebrity to wear Marchesa on the red carpet [in 2004]. Also, Sandra Bullock winning an Oscar in Marchesa [2010]. So there are those moments that you’re like, ‘Wow! That was great.’”