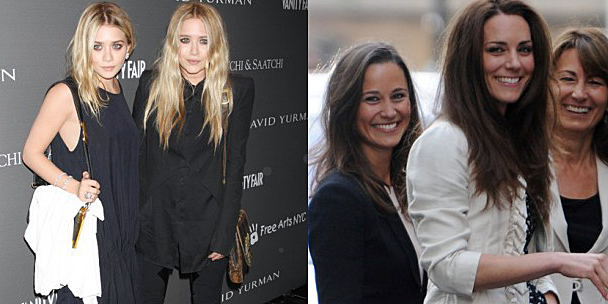 Fact: The only thing better than a stylish individual is a pair of stylish siblings. Read on for all the details on our favorite sisters – a combination of in-demand actresses, top trendsetters, and industry insiders – and their sartorially savvy ensembles.

Middleton mania reached fever pitch even before Kate married her prince but as the royal wedding celebrations drew to a close –- it became clear that the sisters are serious players in the style stakes. Sharing not just bronzed skin, a taut physique, and brunette tresses, the siblings also love a bargain, often picking up pieces from high street chains like Topshop, Zara and French Connection and preferring to keeps things simple with classic colours and pared-back accessories. With the Duchess showing her allegiance to Alexander McQueen and P-Middy turning up front row at Alice Temperley’s spring runway show, you can expect them to be the subject of continued sartorial fascination.

They may be only five feet one apiece, but what the Olsen twins lack in stature, they more than make up for in style. Their stable of brands – The Row, Elizabeth & James, Olsenboye and collaborations with Toms Shoes – have impressed even the most hard-core fashion skeptics and, with their endless layers of Balenciaga, Chanel couture and vintage finds, have practically reinvented grunge-era dressing for a new generation. And now their younger stylish sis Elizabeth is making her mark in Hollywood alongside seasoned actors like Hugh Dancy, and becoming a regular on magazine covers.

Whether they’re sitting front row at Rodarte or appearing in Marc Jacobs’ ad campaigns, Elle and Dakota Fanning cementing their status as the new teen idols.

They arrived to New York last February with suitcases full of Thierry Mugler and Isabel Marant furs, towering YSL pumps, and an endless array of Proenza Schouler PS1 bags. Then they were off to a flurry of fashion shows, and have been perched front row ever since. Virginie and Claire, the statuesque sisters behind the Clarins beauty dynasty, made their official entrée at New York Fashion Week last winter but are now literally everywhere. From Louis Vuitton fetes in Paris to Valentino charity events in Rome, the blond beauties have shown a masterful ability to mix edgy looks with vintage finds to fabulous effect.

More stylish duos on the next page…

5. The Delevignes
A family of British bluebloods if there ever was one. The catwalk-strutting daughters of a property developer and Selfridges personal shopper, older sister Poppy was recently made an ambassador for the British Fashion Council, and also acts as an ambassador for Chanel when not sitting cozying up front row to other fashion besties Caroline Sieber, Leigh Lezark and Coco Sumner. Cara has been welcomed into the Burberry modelling family as the face of their fall campaign.

6. The Millers
Sienna always impresses with her bohemian-chic charisma but with her sister Savannah at the design helm of their Twenty8Twelve label, the scissor sisters have cemented their star status.

7. The Dellals
Charlotte is taking the accessories world by storm with her covetable Charlotte Olympia shoe line, while sister Alice’s punk-chic look has her strutting the London Fashion Week catwalks, and on the decks in London’s hottest nightspots.

8. The Geldolfs
British models and daughters to Sir Bob, Peaches and Pixie Geldof make a statement wherever they go in bright patterns and bold accessories, not to mention ever-changing hair colours.

There are still a few more stylish families you need to know, on the next page…

9. The Trainas
The daughters of romance novelist doyenne Danielle Steele, Victoria and Vanessa are fixtures of the New York fashion scene. Vanessa is a contributing fashion editor for T the New York Times Magazine, a designer for cult Parisian label Maje and is one of Chanel’s infamous ambassadors, “Les Fideles,” while Victoria is a consultant for Proenza Schouler.

10. The Knowles
Beyonce may be the bigger star but younger sis Solange has been earing style points with her fearless and fashion-forward looks. Together the two create truly memorable ensembles.

11. The Jaggers
Dad may be a rock star but these siblings hhave already built impressive resumes. Having released her own collection for Hudson jeans, Giorgia May has also starred in campaigns for Versace, Chanel and Rimmel London while older sis Elizabeth was the face of Lancome and has starred in Marks in Spencer adds with original British supers Twiggy, Erin O’Conner and Laura Bailey.

12. Lou Doillon and Charlotte Gainsbourg
Daughters of legendary actress Jane Birkin, these half-sisters are the ne plus ultra of Parisian cool. When not busy promoting a new album or movie, Charlotte is modeling for Balenciaga while Lou is a model who has appeared in campaigns as diverse as Club Monaco and Vanessa Bruno.

13. The Brandolini D’Addas
Ever-present at all the A-list fashion shows, Bianca and Coco are Italian socialites with the ultimate jet setting lives. Dad is a Count but they create their own fashion formulas by teaming striking runway pieces with relaxed bohemian-luxe accessories.