These ingenues are playing muse to fashion’s most influential designers, have turned heads on the red carpet, and most aren’t even old enough to drive. 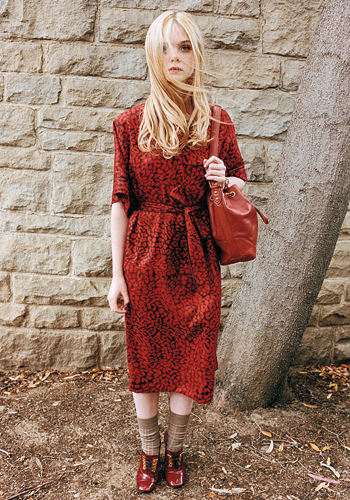 15-year-old
Hugo star Moretz has graced red carpets this year clad in some of the most coveted fresh-off-the-runway pieces by Giambattista Valli, Dolce & Gabbana, Miu Miu, Stella McCartney, and Proenza Schouler, placing her on the best dressed lists of countless publications from T
een Vogue to
Harper’s Bazaar. She was front row at Calvin Klein’s Spring 2012 show at New York Fashion Week, rubbing elbows with Hollywood veterans like Uma Thurman and Naomi Watts. Plus, she was a hot red carpet commodity at the Jason Wu for Target launch, dressed in the designer’s duds before they hit stores.

With a career that already spans more than a decade, Dakota Fanning—who turns 18 this year— could be considered a Hollywood veteran, having worked with A-listers like Sean Penn and Tom Cruise. To add to her already impressive resume, this young star has been the face on Marc Jacobs since 2007, most recently seen in a provocative Lolita-like ad for his latest scent, Oh, Lola. She is often praised for her impeccable taste, opting for lovely and feminine frocks by Marchesa and Valentino. She turned heads as she walked the red carpet at the
Twilight Saga: Eclipse premiere in a beige lace
Elie Saab Couture cocktail dress — a teen dream in couture.

Dakota’s younger sister, Elle Fanning, is a fashion star in the making, having also modeled for Marc Jacobs. Last May, at age 13, she attended the Metropolitan Museum of Art’s Costume Institute Gala as the special guest of Valentino, who dressed both her and Dakota for the event. They both graced the cover of
W magazine, a privilege often reserved for top models and established Hollywood stars. Elle is carving out a more niche, indie image than her older sis – from her work in Sofia Coppola’s
Somewhere to her red carpet choices, opting for quirky ensembles by Rodarte or Opening Ceremony.

Meet the other young celebs who are making waves with their star style, on the next page…

Last year’s youngest Academy Award nominee, 15-year-old Hailee Steinfeld, has the bone structure and long limbs of a high fashion model. So it made sense when Miuccia Prada made her a face of Miu Miu’s Fall 2011 campaign, although the designer did get some flak for casting such a young woman for a luxury fashion brand. The moment Hailee Steinfeld showed up clad in Prada’s brightly hued striped gown at the
2011 SAG Awards, she establisher herself as a budding style star. Since then, she dazzled in Marc Jacobs for the BAFTA, garnered Audrey Hepburn comparisons in tea-length soft pink Marchesa at the Oscars, and went bold in a black and white geometric halter dress from Versace’s Resort 2012 collection, complete with yellow accessories.

The youngest of our fashionable teens is
Mad Men’s Kiernan Shipka, who at the tender age of 12 famously featured her closet on The Coveteur. Borrowing from her character Sally Draper, she prefers classic ladylike silhouettes that recall the 1960s. She was a guest blogger for Lucky magazine, where she documented her style for eight days, featuring gorgeous pieces by top designers like Marc Jacobs and Stella McCartney. Although she hasn’t yet been tapped as “the face” by a fashion house, with her angelic face and talent to boot, who knows what the future will bring? One thing is clear: this tween is already causing us major closet envy. What do you think of these style ingénues? Whose has style staying power?

Fans' reactions are giving us life.