Quiz: How well did you know Yves Saint Laurent?

Considered one of the most formidable fashion designers of the 20th century, Yves Saint Laurent was a master of artistry, design and beauty. Take our quiz to test your knowledge on his remarkable life and career. 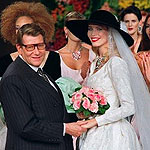 2. Yves Saint Laurent was conscripted to serve in the French Army during the Algerian War of Independence. How long did he last?
a) 5 years
b) 2 years
c) 6 months
d) 20 days

4. Admist what rumours was Yves Saint Laurent released from his duties at Christian Dior?
a) He had a nervous breakdown
b) He had terrible relations with management
c) He was tired of the Christian Dior aesthetic
d) He wanted to start his own line

6. He was the first to have what on his runways?
a) African-American models
b) A photograher scrum
c) VIP front-row seats
d) Gift bags for attendees

8. What trend is Yves Saint Laurent most famous for starting?
a) Beatnik
b) Safari jackets
c) Thigh-high boots
d) Tuxedo suit
e) All of the above

9. What monkier was often associated with YSL?
a) Fashion God
b) The man who let women wear trousers
c) The Reinventor
d) Haute Couture pioneer

10. In January 2002, the couturier broke both of his arms when he fell during a trip to Italy. Having never regained full use of his arms again, YSL was most depressed that he wouldn’t be able to participate in which favourite hobby:
a) Dancing
b) Swimming
c) Sketching
d) Singing11. In 1971, at the height of the Vietnam War, YSL received harsh critisism for showing what on his runway?
a) Models carrying guns
b) Models sporting anti-war protest signs
c) Models in camouflage
d) Models showing the peace-sign as they walked the runway

13. Which designer recieved considerable critisism from YSL for the ready-to-wear lines he designed from 2000-2004?
a) Tommy Hilfiger
b) Stefano Pilati
c) Tom Ford
d) Alber Elbaz

15. Upon retirement, YSL become more and more reclusive. Where did he spend the majority of his time?
a) Paris, France
b) Marrakech, Morocco
c) Rome, Italy
d) New York, USA

16. Yves Saint Laurent was rumoured to suffer from what affliction the majority of his life?
a) Depression
b) Alcoholism
c) Paranoia
d) Drug problems

18. In news of his untimely passing, which fashion publication is working on a special issue dedicated entirely to YSL?
a) Vogue
b) ELLE US
c) WWD
d) InStyle

19. Which well-known designer said this when news broke of Yves Saint Laurent’s passing: “I lost my god in fashion. He was such a treasure…”
a) Giorgio Armani
b) Jean Paul Gaultier
c) Alexander McQueen
d) Yohji Yamamoto

Question #1
Answer B: Yves Saint Laurent (YSL) was born on Aug. 1, 1936 in Oran, Algeria. He began his career in fashion at the age of 17, winning first prize in a contest sponsored by the International Wool Secretariat for a cocktail dress design.

Question #2
Answer D: YSL served in the French Army during the Algerian War (1954-1962). After 20 days, the stress of the situation led him to ne institutionalized in a French Mental hospital where he underwent psychiatric treatment, including electroshock therapy for a nervous breakdown.

Question #3
Answer B: Following Christian Dior’s death in 1957, YSL was a mere 21-years-old when he was put in charge of the fledging design house.

Question #4
Answer A: YSL was released from his duties at Christian Dior due to rumours he suffered from a nervous breakdown.

Question #5
Answer D: YSL started his own line in 1962 financed by his companion, Pierre Bergé. He started a revolution in the way women dressed by creating the first-ever Le Smoking (the female version of the tuxedo) which was perfect timing just as women were starting to enter the workplace.

Question #6
Answer A: YSL was the first to hire African-American women to work his runways. The model known as Mounia, Saint Laurent’s protégé and one of the first black supermodels, said on French radio just recently: “He made me proud of my color.” Likewise, Naomi Campbell credits her first-ever French Vogue cover to YSL. The media lists the supermodel as saying: “When I said to him ‘Yves, they won’t give me a French Vogue cover, they won’t put a black girl on the cover’ and he was like, ‘I’ll take care of that’, and he did.”

Question #7
Answer D: When France won its 1998 World Cup soccer final, it was Saint Laurent who staged a runway show centre-field before 80,000 spectators in the Stade de France.

Question #8
Answer E: All of the above. YSL was best-known for creating the most influential trends that still resonate today. He was inspired by the Parisian streets of the ’60s filled with beatnik hippies, along with putting women in safari prints and traditional menswear like pants and his oft-ripped off Le Smoking jacket which was tailored to fit the feminine form.

Question #9
Answer B: Saint Laurent was always a man of controversy. Reportedly in 1968, YSL suggested that women should wear pants as their go-to uniform. He was often quoted as saying that all a woman needed to be stylish was a pair of pants and a coat. “My job as a designer,” he once said, “is to make clothes that reflect our times. I’m convinced women want to wear pants.”

Question #12
Answer B: Iman. Saint-Laurent famously once said: “My dream woman is Iman” and as such, he enlisted her to work his African Queen Couture collection whereby the entire collection, down to the accessories, was designed with her in mind.

Question #13
Answer C: It is reported that YSL was very displeased with Tom Ford as the Creative Designer for his ready-to-wear-collection. Industry insiders speculate that is why Ford stepped down from the house in 2003.

Question #14
Answer D: In 2002, Saint-Laurent closed the couture house of YSL. While the house no longer exists, the brand still thrives through its parent company, Gucci Group.

Question #15
Answer B: Marrakech, Morocco. After retiring from the business, Saint-Laurent became more shut-off from the world spending the bulk of his time at his retreat in Marrakech. The ashes of the late designer, will be kept in a tomb in the “Majorelle” botanical gardens, a property he acquired in the 1980’s.

Question #16
Answer A, C and D: Bouts of depression, alcohol and drug abuse marked YSL’s career. Pierre Berge, his longtime friend and business partner has often been quoted as saying Saint Laurent was born with a nervous breakdown. When he left the industry in 2002, he spoke of said battles: “I’ve known fear and terrible solitude,” he said. “Tranquilizers and drugs…. The prison of depression and hospitals. I’ve emerged from all this, dazzled but sober.”

Question #17
Answer C: The Montreal Museum of Fine Arts and the Fine Arts Museums of San Francisco have designed and developed, in partnership with the Fondation Pierre Bergé – Yves Saint Laurent, the first retrospective spanning the forty years of creation of the Maison de haute couture Yves Saint Laurent.

Question #18
Answer B: ELLE US is planning on creating a special issue dedicated to the late designer to be released sometime this month.