Meet the photographer who is turning a lens on Hollywood’s next generation. 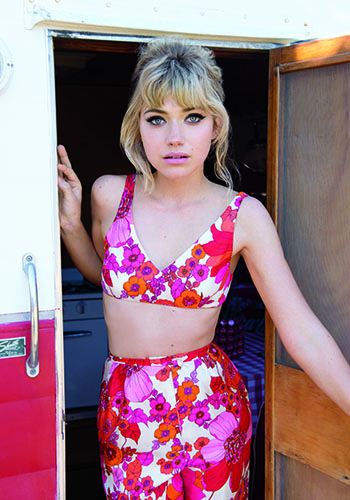 The day that Claiborne Swanson Frank photographed Riley Keough could have been a disaster. The actress’ vintage tulle dress was perfect—the weather, however, was a total diva.

“We waited and waited for a break in the rain,” recalls Swanson Frank. “When the opening in the sky came, Riley rose to greet it. We got that shot in five minutes. It was amazing.”

COUNTDOWN: The best fashion quotes of all time

Swanson Frank, a Los Angeles-based stylist and photographer, was shooting Elvis’ granddaughter for Young Hollywood, her forth­coming book of portraits of stars in the making. “This is not just about beautiful girls and beautiful pictures,” emphasizes Swanson Frank.

(Although the images, saturated in the red-lipped iconography of old Hollywood, are gorgeous.) “It’s about the journey, the struggle to arrive and make your own way in Hollywood.”

This new cohort of movie-business insiders is noticeably different. (Swanson Frank also includes makeup artists, publicists and an entertainment lawyer in her glossy tome, a follow-up to 2012’s American Beauty.) “This generation is crossing industry lines in ways that have never been seen before,” she says, adding that many young actresses also produce, write and direct.

The women, talents like Lea Michele and Hannah Simone, are also not interested in maintaining some sort of Garbo-esque mystique. “It was such a gift to shoot these actresses because they give everything,” says Swanson Frank. “There’s so much vulnerability.”

Each woman shares her often-unglamorous struggle to “make it”—from bombed auditions to body-image issues to constantly chasing the part that got away. “So often in our obsession with celebrity, the reality doesn’t quite match the story,” reflects Swanson Frank. “It’s amazing that they wanted to share the truth of the journey—the beauty of it and the hardship of it.”

Similarly, Swanson Frank battled to make this book happen. After drawing up a list of dream subjects, she began cold-calling. For all their outward polish, the shoots were hardly glamorous experiences. “It was lucky if we had a catering basket,” she says with a laugh. “But being behind the camera is actually the most Zen place for me. It’s the most selfless space in my life, because my work is really about celebrating the subjects.”

It has been as gratifying for Swanson Frank to see girls in the book get their big break. She shot Dakota Johnson just before the actress got cast in Fifty Shades of Grey. “I have a great love of catching that ‘right before’ moment—just before people become who they came here to be.”

Claiborne Swanson Frank worked with each woman to “empower” her with old-Hollywood-inspired styling, which is a mix of vintage and Michael Kors creations. The designer also wrote the foreword: “Once I saw her first book, I knew our clothes would be a natural fit for her work,” he says. “I loved the way she was able to capture these gorgeous moments with very chic women.”