These starlets can thank their stylists for making them regulars on the best-dressed lists. 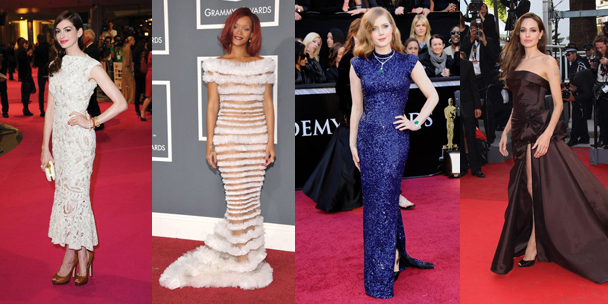 Celebrities make fashion mistakes. And since many A-listers have replaced supermodels as the face of brand and collections, red carpet style has become more important than ever – especially when it comes to establishing trends. That’s why we’ve enlisted the help of stylist and LA Times Magazine Fashion Editor Hayley Atkin, to explain how each star went wrong, and how with the help of a stylist, they rose from mediocre-at-best to great fashion heights.

Who: Anne Hathaway
Before: By embracing a style Atkin describes as “obvious,” the actress’ beauty was stifled by average dresses that didn’t do anything to make a statement or to elevate her brand. And as accessible as her look may seem, with a current reputation for pushing fashion boundaries, Anne’s prom-inspired gown was far from cutting edge or inspirational.
After: “Now that she has a stylist, the pieces that she’s picking [aren’t] so obvious – they’re actually very unique and tell a fashion story,” explains Atkin. And considering stylists are educated in how to apply a season’s narrative to a celebrity’s personal brand, the actress’ lace Alexander McQueen dress stays true to her feminine vibe while taking risks through its length and vintage influence.

Who: Rihanna
Before: Boasting what Atkin considers “street style,” Rihanna seemingly equated sexiness to overt exhibitionism – which explains her bare midriff and low rise denim. “It’s an obvious sexiness,” adds Atkin. “And it actually doesn’t make sense in the fashion world.”
After: The help of a stylist let Rihanna show some skin, but in a sophisticated way. Take the risqué couture design by Jean Paul Gaultier she wowed with at the Grammys. “Her style has totally grown up, and she looks like she’s come into her own,” elaborates Atkin. “You have to be able to see the bigger picture, and her stylist did a really good job in doing that.”

Who: Angelina Jolie
Before: Having turned heads not only for red carpet antics, but her gothic infatuation, Angelina Jolie chose unflattering garments that Atkin believes was out of disinterest in the industry or even perhaps her own perception of how she looked. “She was wearing gowns that weren’t so flattering on her body,” she affirms. However, with the help of a stylist, Atkin believes this phase – and this dress – could’ve easily been avoided.
After: Now walking the fine line between sexy and sophisticated, Jolie’s transformation from drama queen to award-nominated actress and philanthropist is reflected in her fashion choices – especially through such powerful pieces like this dress by Atelier Versace worn to the Tree Of Life premiere. “Her stylist has refined her style,” describes Atkin. “And now it actually matches what she’s doing [in life].”

Who: Nicole Richie
Before: Once famous for her social life and social circle, Nicole Richie opted for unflattering, skimpy styles like this that reflected her immaturity and made her look childish. “She was a Hollywood girl that did not look very attractive in what she was wearing,” asserts Atkin. “And [her outfits] were very young – because she was very young. Here, she looks like a little girl.”
After: Now, Richie is famous not only for her personal style but her contributions to the industry in general. As a result, this classic, minimalist gown by Jason Wu worn at the MET Costume Gala reflects her place in the fashion world, and maintains a playful elegance through the gems and sleeves that works to uphold her brand. “If you feel sexy, it doesn’t always mean you need to put on a skin tight number,” reminds Atkin. “Sometimes a long, flowing gown [can look] sexier on your body.”

Who: Amy Adams
Before: While she avoided making blatant fashion offenses, Adams once previously chose outfits like this that were boring, average and what Atkin attributes to “the girl next door”. By categorizing herself as a fashion wallflower, the actress did herself no favours when it came to getting noticed by the press or the industry; instead blending into the background through her choice of spaghetti straps and played-out prints.
After: Now, Adams wants to get noticed. “Her new look is amazing – it’s so chic, really polished and totally elevated her personality and her style,” gushes Atkin. Choosing a bold shade to accentuate her hair colour, Adams’ affinity for an unconventional fabric and dress design (like the one she wore to the Oscars L’Wren Scott) works to keep glamour modern, while cementing the actress as one of Hollywood’s most understated yet celebrated fashion heavy-hitters.