Our favourite Canadian designers open up about their most Canadian creations. 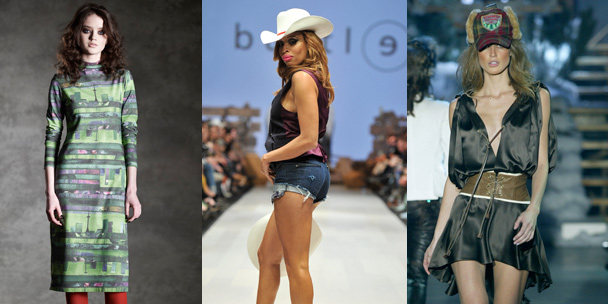 In honour of Canada Day, we’ve rounded our favourite looks inspired by the Great White North. With the Summer 2012 Olympics right around the corner (not to mention the Calgary Stampede), there’s no better time to wear your pride on your sleeve—literally. Here are some of our favourite
Canadian designers talking about their top fashion looks inspired by Canadian iconography.

Canadian Inspiration: “Welcome to T.O.” Raina immigrated to Canada in 2004, where she witnessed her first fall in Toronto. “It was an experience beyond words,” she writes in her lookbook. “It felt like God filled this bucket with warm hues and splashed it across the city. My four year old son and I spent hours collecting leaves, seeds and berries in all imaginable colours.” We’re fans of Raina’s silk “subway scarf,” a handy accessory with the full TTC map screened on it. Fashionable and practical!

Canadian inspiration: The Toronto Harbourfront. “[A hot seller] for women is a photo print on a really lovely soft silk blouse.” Sparks told the
National Post. “It’s the Toronto Harbour with sailboats going across it on a really hazy day—it’s almost as though you are looking through binoculars!”

Canadian inspiration:
The Calgary Stampede. "Bustle collections are characteristically thematic, so inspiration for us usually comes from a particular activity or event around which an entire collection can be built. We knew it was the Centennial anniversary of the Calgary Stampede,” says Prinselow. “We thought … What’s more Bustle and more Canadian than the Calgary Stampede? It’s a 100 year old party where everyone loves to dress the part, and it’s all about fun!"


What top design duo used a clip from an SCTV sketch in their runway show? Find out on the next page…

Canadian inspiration: Even though they now show in Milan, Dan and Dean’s Canadian DNA is inextricably linked to all their collections. Who could forget their famous Skate Moss shoes, or their collections based on Algonquin Park camping trips? “We love the fact that we’re Canadian, it’s what keeps us apart from our competition.” Dan says. “It’s identifiable to us and we’re proud of it. Our most Canadian runway was the ‘Great White North’ show, and the music was hysterical—we mixed the “Ontario” song with a clip of Bob and Doug McKenzie talking.” Take off, eh?

Canadian inspiration:
The Year of the Flood by Margaret Atwood. “We took the main character, Brenda, and the three main scenes of her life,” Badanjak told
Global News. “She lived on a compound, to living with a ‘Stepford wife’ kind of mother, to living in a commune, and then finally living as an exotic dancer- so we melded them into a mashup.”

Summer fashion: The six pieces to buy this season