Designers like Chanel rely on petite mains to seduce us with poetic embroidered details and fanciful embellishments. 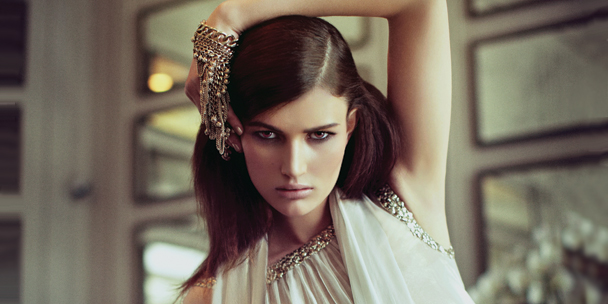 Photography by Tess Feulhade (above)

My final stop was the Lesage workshop, which is known for its couture embroidery. My tour began in an unheated small room crammed to the roof with weathered cardboard boxes. Inside these boxes were 60,000 embroidery samples that date back to the late 1800s, when the house was owned by Albert Michonet. “When designers want inspiration, they look through these pieces,” explained Nathalie Vibert, the press manager for Chanel’s Métiers d’Art. “Everyone from John Galliano to Alexander McQueen to Thierry Mugler has spent time in this room.” In 1924, Michonet sold the studio to Albert and Marie-Louise Lesage—who had been the head of embroidery for Madeleine Vionnet. In 1949, their son François took over the business, which he ran until he passed away at the age of 82 last December. “We miss him constantly,” said Vibert. “He came to the studio every day—even when he became quite ill. He and I had a platonic love affair for 23 years. You can imagine how lost I was after he died. I see his touch, his presence, everywhere.”

Over the years, Lesage worked with all the famous designers—Pierre Balmain, Cristóbal Balenciaga, Christian Dior, Hubert de Givenchy, Yves Saint Laurent, Christian Lacroix—but for the last few years, he was only involved in producing samples for Chanel. Lesage felt that the company’s decision to purchase the studio in 2002—in part to secure its continued survival—reflected the spirit of Coco. “She was known for helping artists such as Jean Cocteau, Picasso and Igor Stravinsky,” explained Vibert. “Mr. Lesage appreciated that history.”

We continued our tour to the bead room—a crafter’s idea of heaven. “It’s an organizational mess; we don’t track it on computer, we just know what we’re looking for—usually!” said Vibert, laughing. Next, she took me through a series of interconnected, warren-like dens where women were quietly working on samples for the next season. One woman was redoing a hand-embroidered buttonhole on a couture jacket. “I wasn’t happy with the first,” she said simply. Vibert suggested I try my hand at using the Lunéville crochet hook to sew on a line of sequins. When I was a teen, I barely received my Needlework Skills Girl Guide badge. (In fact, I’m quite certain it was a sympathy offering from the troop leader, as I lacked any
savoir faire with a needle and thread.) I tried. I failed. Note to self: Stick with your day job!