Kenneth Cole launches an ad campaign that is as thought-provoking as ever. 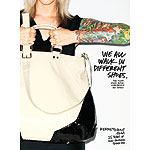 The New York designer and one-man brand Kenneth Cole has been an innovator in cause marketing for 25 years. Like Benetton, Cole is known for ads that talk about everything but the clothes, from the “We All Have AIDS” campaign, featuring celebrities like Alicia Keys and Elton John, to his 2006 collaboration with Jon Bon Jovi on poverty and homelessness. Fittingly, Cole’s new campaign – “We All Walk in Different Shoes” – marks his 25th anniversary by celebrating fellow “non-uniform thinkers,” from actors and athletes to lobbyists and activists.

“Kenneth really wanted to remind people of our heritage,” explains Kyle Andrew, the company’s senior vice-president of marketing. “He put a condom in his ads before you were even allowed to say anything about AIDS, let alone in a fashion ad!” The current campaign features portraits of regular people who “live their lives differently from the norm.”

Work on the ads began over a year ago, when Cole and executives spent countless sessions brainstorming about their dream cast. Among the dozen carefully chosen subjects are a quadriplegic rugby player, a married lesbian couple and their daughter, Israeli and Palestinian film directors posing together and an undocumented immigrant. Feminist rocker Theo Kogan – all technicolour tattooed arms and legs – wasn’t part of the original cast, but campaign stylist Bill Mullen and photographer Terry Richardson were so inspired by her that they pushed for her to be included.

For the first time, the company’s URL is listed at the bottom of each print ad and billboard, encouraging consumers to continue the conversation by watching interviews with subjects, voting in polls and contributing to Cole’s Awearness blog. (The company’s tagline is “To be aware is more important than what you wear.”) The non-uniform thinker generating the most response to date? Hip young entrepreneur and anti-racial-profiling activist Sonny Caberwal, who was photographed wearing a turban, the religious headgear of practicing Sikh men.

“With race and diversity as part of the discussion leading up to the [American] election, the campaign feels very timely,” says Andrew. “And if any brand is allowed to have more content than just a page in a magazine, it’s Kenneth Cole.”