A model moment with Chantal Stafford-Abbott 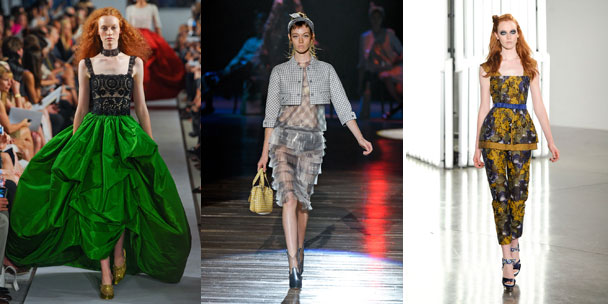 Chantal Stafford-Abbott was 15 when she first decided to pursue modeling from her hometown of Ivry-sur-le-Lac in the mountains of Quebec. The 5”11 redhead researched modeling agencies in Montreal before attending an open call at Specs Models. It didn’t take long for the agency to sign her: they were immediately blown away by Stafford-Abbott’s fresh look and natural grace in front of the camera. What followed was one of those meteoric rises most girls can only dream of: within months, Stafford-Abbott had appeared on the cover of LouLou magazine and was booking high profile gigs on runways from Tokyo to Milan. Since then, she’s appeared in Vogue (shot by Mario Testino) and walked the catwalk for industry heavyweights like Oscar de la Renta, Vivienne Westwood, and Marc Jacobs. We caught up with Stafford-Abbott to get the dish on her spring/summer 2012 season.

You have worked extensively with Marc Jacobs. What is that experience like? “This was my fourth season working with him, and it’s always really fun. You have to do a bunch of callbacks and he might call you at 1 am the day before the show—like he did for me—and ask you to run over to get re-fit. You never know if that’s a good thing or a bad thing, if it’s because the clothes don’t fit you well or because they’re giving you a better outfit. You only confirm about 2 hours before the call time that you got the job, but even at the show you have a chance of being canceled—you never know.”

Have you ever gotten an extreme makeover for the runway? “No! At Marc Jacobs they wanted to cut bangs on all the girls, so a lot of models were being canceled because they didn’t want their hair cut and their agencies wouldn’t allow it. I got a phone call from my agency as I was sitting in the chair, and they said ‘Get out of there right now! Don’t let Marc Jacobs cut your hair! You can’t have bangs for the rest of fashion week.’ I was given hair extensions that they cut for the show, but they didn’t have red extensions so they gave me brown ones. Although I did get my eyebrows bleached—even though I was born with almost no eyebrows—for the Rick Owens show in Paris."

What are some of your favourite shows to walk in?
"I work for Oscar de la Renta a lot, and I really love his show because you transform into a different woman when you wear his pieces. I had the most amazing flowy dresses that were really spectacular, and they put my hair in a pouffey afro. I loved it."

Have you had any close encounters with celebrities during fashion week? "I met Mary-Kate and Ashley Olsen for their casting of the Row. I went back twice for the casting, and they said they really liked me. Then I went back for the fitting and they said they wanted to change my look. Then they called me once more before the show and said “We love you, this is final.” Then, at 11 pm the night before the show, they canceled me."

What was the scariest show to walk in? "I was kind of nervous at Rodarte because at the fitting my heel broke off. I wasn’t sure if the shoes were sturdy, so the whole time I was thinking ‘Imagine if I fall right now,’ that was be so bad!"