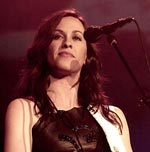 Before “uploading” and “downloading” became part of our modern lexicon, people actually bought CDs. One album that made it into almost every young woman’s collection was Alanis Morissette’s Jagged Little Pill. Since its release on June 13, 1995, it has sold more than 30 million copies across the globe and, to this day, remains the best-selling debut by a female artist.

In Beatle-esque fashion, it features a multitude of hits including You Oughta Know, Hand in My Pocket, You Learn, Head Over Feet and Ironic. To mark the album’s 10th anniversary, Morissette has teamed up with her original producer, Glen Ballard, to record an acoustic version. Written when Morissette was in her early 20s, Jagged Little Pill chronicled an emotionally turbulent time in her life. Today, the 31-year-old singer says she’s enjoying her third decade on this planet. “There’s a little less drama and a lot more peace for me.”

How have you changed since the Pill? “I don’t take life so seriously. I feel like I’m living the lifestyle of a 45-year-old while emotionally I’m still 12.”

Are you sentimental about the Pill’s 10th anniversary? “I feel celebratory. I feel like it’s time for me to give it a tip of the hat and then continue on my merry little path.”

You Oughta Know was my wake-up call after a bad breakup. Little did I know how unoriginal I was; the song spoke to everyone. “Me too, by the way! In my own little egocentric world, I thought I was the only one
going through this; then I realized that I wasn’t alone.”

What do you love most about language? “I’m a real fan of artfulness in expressing. I know that words can be misinterpreted easily. Connection is important to me, and it’s a really great way to connect.”

Is there any healthy competition with your fiancé, Ryan Reynolds, in terms of one-upmanship with language? “No competition in that area — I clearly beat him! No … He schools my ass! I think Ryan is so smart and funny, and he’s a wordsmith; that’s a big turn-on for me.”

You have a new reality show in the works. What’s it about? “It’s called We’re with the Band! It’s like The Larry Sanders Show and Curb Your Enthusiasm — it has all of those sensibilities of improvisation. There’s so much awkwardness and beauty that happen behind the scenes
with a touring band, so any time I can create a new level of transparency behind something that has been cloaked in mystery forever … I’m a huge fan of that.”