Why we're falling for Tumblr 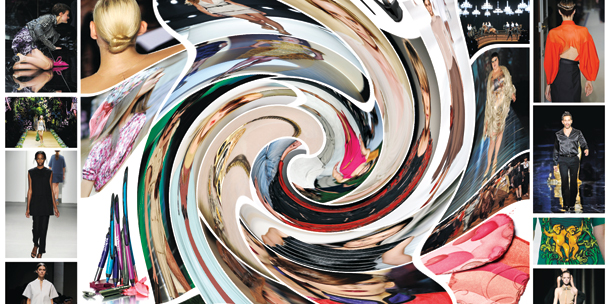 If Twitter and Facebook were to make a baby, it would be Tumblr, a hybrid of both social-networking tools that is emerging as the place for anyone with something to say—and show. In fashion circles, it has already won many fans, from big-name designers like Kate Spade and Oscar de la Renta to retailers like Joe Fresh Style and prolific bloggers who jump on trends and news faster than a New York minute. In fact, 180 of Tumblr’s top 1,000 blogs are linked to fashion.

“Tumblr has found a sweet spot between Facebook and Twitter,” explains Clive Thompson, a New York based writer and social-media critic who is working on his first book, Outsmart: The Future of Thought in the Age of Machines. “It’s a microblogging tool that can be used to capture the raw content of someone’s brain at any given moment—like a snapshot. Collectively, the bits and pieces of things that interest you form a kind of personal scrapbook.”

For visual types—like the fashion set—Tumblr is a cyber-utopia. It kicks down the walls that limit creativity. Pictures are big and bold— not postage-stamp-size—and text can be long or short (a carefully constructed essay or a random thought). “Tumblr has put the beauty back into blogging,” explains Amber MacArthur, a social-media speaker and strategist and author of Power Friending, a how-to book on building up brands online. Perhaps it’s not surprising, then, that Tumblr is one of the fastest-growing social networks on the planet. An estimated 25,000 new users sign up for Tumblr each day, and, collectively, the Tumblr nation has made more than three billion (yep, billion with a “B”) posts since it was launched in New York in 2007. Like Twitter or Facebook, users gain followers and mini-communities of like-minded souls, united in their love of everything from shoes to Courtney Love’s daily ensemble.

And for those who don’t speak HTML or WordPress, Tumblr is a friendly place. While traditional blogging requires a certain amount of knowledge of those mysterious techie codes, with Tumblr, ignorance is bliss—and, even better, quite manageable. Each user is led by the hand—like a supermodel in stilettos— over a freshly waxed floor and spoon-fed blog-building steps in digestible bites, one at a time, until, almost magically, she has an active, easily managed blog. Thompson sings the praises of Tumblr for its design and ease of use. “It’s brilliant,” he says. “It’s meant to be used by people who care about the guts of their messages and don’t want to worry about the HTML stuff. Oldschool blogging was like trying to master an early word processor: It wasn’t fun.”

But it’s no accident that the fashion world has found a cozy place to settle on Tumblr, as the site is in active courting mode. In 2010, Tumblr hired its own fashion director, Rich Tong—who launched Weardrobe.com, a social-fashion site—when it realized its allure among style setters. Imagine the techies at Facebook hiring a fashion director? Not a chance. One of Tong’s first duties was to recruit more than 20 bloggers to cover New York Fashion Week—all expenses paid. He cherry-picked fashion bloggers with a robust base of followers, including Jessica Quirk (whatiwore.tumblr.com) and Rebecca Stice (theclotheshorse.tumblr.com).

Stice sees Tumblr as a reflection of how fashion is changing. Fashion moves quickly—and so does Tumblr. Before the catwalks are disassembled and put away, a verdict on the strength of a designer’s work has already echoed globally through social media. “A blogger on Tumblr can put up pictures taken at a fashion show just minutes later,” says Stice. “Those pictures can quickly get ‘liked’ or reblogged by other users of the sites. Within hours, they have been seen by thousands of people.” Stice also believes that fashion is becoming more bottom-up. “Instead of designers and traditional media directing the public on how they should dress, with fashion bloggers we see people communicating more with each other and major brands about what to wear,” she says. “Five years ago, almost no brands or magazines were using social media; now, magazines like Vogue and stores like Kate Spade are Tumblr and Twitter users.”

Nova Scotia fashion designer Lisa Drader-Murphy, owner of Turbine, has witnessed first-hand the power of Tumblr and its social-media cousins. In January, she became a Tumblr user, spurred on by Turbine’s participation in the Golden Globes gifting lounge. She was the lone Canadian fashion designer attending, and she knew this was an opportunity to get recognition for the Turbine label, which includes everything from tailored wool suits to handbags to a full cosmetics line. Drader-Murphy posted celeb pictures from the event on her Tumblr blog: Jennifer Love Hewitt swooning over an asymmetrical silk knit dress, Adam Lambert sporting perfectly applied smoky eyeliner, Kimberly Buffington (Mrs. Dennis Quaid)loving an upside-down dress (one of Turbine’s signature designs). She credits Tumblr, in part, for pushing Turbine onto the global fashion stage. Now, she receives orders from customers worldwide, including Paul McCartney, who has ordered gifts for his entourage.

To trendspotters like MacArthur, Tumblr is much more than a retailing engine. “It represents a new wave of blogging,” she explains. “We are seeing a boom in what we call ‘light blogging’ and real-time social media, with a 20-percent jump in usage.” Creatively, it has opened up self-expression and blogging to non-writers. Snapping a photograph and posting it is now enough to be part of the world of social media, removing the pressure to be a wordsmith and come up with long, engaging posts. “Tumblr provides people with a chance to claim their own piece of creative real estate on the Net,” says MacArthur. “You post it; you own it.” And that is how blogging will tumble its way into the future.

Erika Bearman, director of communications, is behind this highly visual blog that’s heavy on retro images.

The focus is on McQ, the designer’s more affordable label. Check out the great shoot featuring Molly Smith.

3. On Tumblr by Ann Taylor ontumblr.com

Keep up on trends-in-themaking in fashion, art, film and photography, as seen through a designer’s eye.

The work of this top fashion photographer rocks our world.

This foot-focused site is sure to kick your passion for shoes into high gear.

Jessica Quirk explains her love of vintage fashion (mainly ’50s and ’60s) in a charming and often funny way.

7. The Girl Next Dior thegirlnextdior.tumblr.com

California girl Maya has a great eye for style on the cheap that’s suited to her student budget.

You can bet that following the stylish life of rocker chick Courtney Love is never dull.

Take a peek into the life of Canada’s nicest supermodel, Coco Rocha.