Why I Hated Summer Camp

Summer camp taught Olivia Stren how to water-ski and eat mystery meat – and that perseverance is overrated. 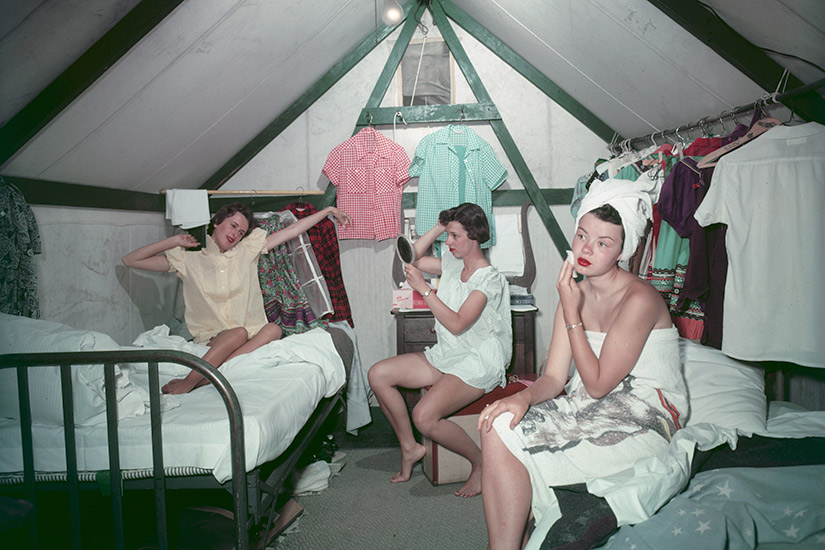 At sunset on Sundays at summer camp in the Haliburton Highlands, we’d sit around a fire in our pine-green polyester camp uniforms and sing songs. I particularly loved “Leaving on a Jet Plane” because it was a sad song, making it (quasi-) acceptable for me to weep openly and blame it on the music. I also loved it because it was about departure, and I longed for any kind of transit–jet plane, Greyhound, horse and buggy–to take me away. As I sang “don’t know when I’ll be back again” for the gazillionth time, I knew when I wanted to be back: never.

If I haven’t already made it as clear as a summer day, I hated camp. Camp was for the sporty, the hearty, the peppy, the outgoing, the game. My fellow campers had cool unisex names like Sydney and Greer and Blaise and Taylor. They were the kind of girls who would run toward the ball in team sports (not away from it, like I would), the kind of girls who, in the wintertime, had ski-lift tickets permanently adhered to their jackets, the kind of girls who left school early to play field hockey (by choice), their blond ponytails swinging cheerfully, while I scurried home early to watch The Young and the Restless. I was more of an observer. I should add that I wasn’t a loner–I was a sociable kid, but I preferred to do my socializing in a place that was close to a shower and, ideally, a Benetton and in a way that didn’t involve enforced peppiness and clapping to “Johnny Appleseed” before eating “mystery meat.”

My fellow campers at Gay Venture (yes, that really was the name of my camp) started looking forward to camp at the first pop of spring. I started dreading it in deep winter, when my dad would ask “Do you want to go to camp this year?” “Yes,” I would lie, a painful lump the size of a tetherball taking up residence in my throat. I was at that preadolescent age when being (or feeling) different felt like certain social doom. And I really wanted to fit in, so I forced myself to go for five traumatic Julys.

My campmates learned how to water-ski when they were barely out of Pampers. I went water-skiing for the first time at camp, but my skis were too big, and as I struggled to get up, they flipped up to stab me in the thighs. I remember a cabinmate beholding my bruises and exclaiming in revulsion “What IS that?” “I went water-skiing,” I explained feebly, my bruises having assumed rainbow colours to match the mirrored Oakleys she had perched, crownlike, on her sun-bleached-blond head.

These girls also liked eating peanut-butter-and-banana sandwiches every day, and they hated rainy days because it meant they couldn’t go water-skiing. I was allergic to peanuts (as well as dairy and eggs and chocolate and pretty much everything else you eat at camp) at a time long before it was fashionable to have allergies and intolerances, and I longed for a month-long monsoon. My favourite activity at camp was “rest.”

During my last summer at Camp Gay Venture, I went on a canoe trip, which involved the particular delights of portaging through a leech-and-blackfly-populated swamp. My tripmates emerged from the experience tanned and strong and proud. I emerged so heavily bitten by blackflies that my eyelids swelled, nearly sealing shut. Another camper, whose name I have blocked, looked at me and laughed. “Nobody is going to dance with you at the regatta with the boys’ camp next week!” she cackled, her tongue blue from a just-eaten jawbreaker and her braces glinting in the midday sun.

I recall weeping with joy and relief on Parents Day at the sight of my mom and dad, the way a prisoner might sob upon seeing a family member after weeks of wrongful incarceration. They’d bring me jujubes and copies of Soap Opera Digest and fresh fruit and take me to lunch in the nearby town. Sometimes they’d even get into a fight, and I’d feel a chest-splitting homesickness. “Why don’t you come home?” my mom would say. She was on to me. “No, I love it here,” I would say, tears as big as jawbreakers rolling down my blackfly-bitten cheeks.

I worried that if I took her up on her offer, which I longed to do, it would be a loser move. I’m not sure why quitting camp was unthinkable when, frankly, I excelled at quitting other things. I took up drumming when I was 13 because I wanted to be like Mary Stuart Masterson in Some Kind of Wonderful, but I quit before I graduated from my practice snare pad. I also quit piano, ballet, gym (as soon as it wasn’t compulsory) and calculus.

I even quit Writer’s Craft in high school after getting poor grades. But quitting camp felt more like a personal failure because it would be admitting that I wasn’t–and would never be–like those peppy ponytailed girls.

Parents Day was the halfway mark, a sort of temporary life jacket and a reminder of life Outside. But it was also a reminder that I had two weeks left until the last day, the one I’d spend the whole month fantasizing about. Until then, I’d have to subsist on the letters my mom would send me. During “rest,” I’d lie in my musty bunk and read and reread her letters; she’d write me detailed accounts (in French) about the goings-on in The Young and the Restless’ Genoa City. (“Nikki s’est mariée avec Jack Abbott,” etc.) I’d read about the recent baby swapping and Nikki’s pill-popping addiction. I’d pop a jujube and pine for home.

Other girls at camp, the aforementioned ones, sometimes got glamorous injuries (a broken arm from horseback riding or a sprained ankle from leaping for a volley on the tennis court) that would exempt them from swimming and canoe trips. They’d lament their convalescence, and I’d burn with jealousy. The last year I went to camp, I finally sustained a proper injury of my own–during arts and crafts. While my peers might have hurt themselves slalom skiing or show jumping, I got injured making a mug. The pottery wheel fell on my leg, and my foot got caught between the burning motor and the spinning wheel. I was sent to convalesce at the infirmary. I couldn’t go swimming or water-skiing or portaging, I was told, and I tried to look appropriately aggrieved. After a few days of lying supine with a plastic A&P bag on my foot, I left camp–not by jet plane but in somebody’s Mazda–and went to Sick Kids Hospital in Toronto. I had, it turned out, a third-degree burn on my foot and needed a skin-graft operation immediately. I spent the rest of that summer lying in the burn ward at Sick Kids with staples in my foot and my leg in a cast–all of which somehow seemed a preferable fate to spending my time at camp. I knew when I’d be back again.

This story originally appeared in the July 2016 issue of ELLE Canada.