With its cobbled streets and cozy vibe, Copenhagen is a magical backdrop for modern Danish design. 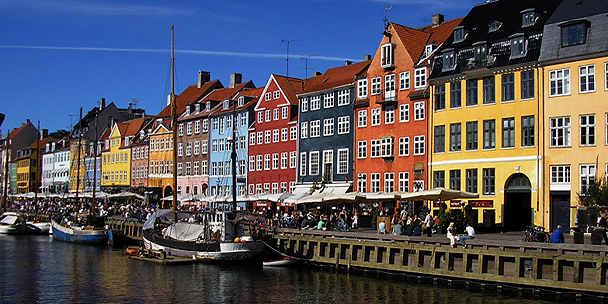 Your guide Jeweller
Julie Sandlau, 30, works in gold and silver, threading garnets, green agates and other semi-precious gems through her creations. The blond former model is inspired by nature and by vintage jewellery. "You might find pieces similar to mine in your grandmother’s treasure chest," she says. Worn by Sarah McLachlan,
Gwyneth Paltrow,
Reese Witherspoon and J. K. Rowling, Sandlau’s collection is available in Canada at select Holt Renfrew stores.

The vibe "In Denmark, we use the word ‘Hygge,’ which means relaxed and comfortable," says Sandlau. "That’s what this city is all about." And the same can be said about its affable residents. As you stroll along the cobbled streets, it strikes you how svelte and
fresh-faced — and gorgeous — the locals are. Yet the Danes are unlikely to brag about their glowing good looks — possibly due to Jante’s Law, a Scandinavian notion that suggests no one person is more special than the next.

The big picture With its parks, canals and pedestrian-only streets, Copenhagen is one of Europe’s greenest capitals. More than a third of the locals travel to work by pedal power; the city even offers a free bike service. You’ll find most sights within a 20-minute radius: colourful Nyhavn, with its gabled merchant houses; the royal residence, Amalienborg Palace; The Royal Theatre; The Danish National Gallery; and the crown jewels at Rosenborg Castle. With only five hours of daylight in winter, the Danes have an immense appreciation for natural light. This is reflected in the airy structure of the new Opera House, designed by Henning Larsen, and the Black Diamond extension to the Royal Library. The winter months may see locals cozying up in candlelit bars, but at the first sign of sunshine, tables and chairs are moved out to the sidewalks and people take to the parks and Amager Strand beach.

For world-class Danish fashion, slip on Munthe plus Simonsen, Bruuns Bazaar, Rützou, InWear/Matinique,
By Malene Birger, By Groth, Sand, Noa Noa or Noir. International brands such as Gucci, MaxMara, Yves Saint Laurent and Prada have flagship stores on Strøget, and smaller boutiques, such as Holly Golightly, carry Balenciaga, Marni and Marc Jacobs. "For a break, pop into Kronprinsensgade, our trendiest shopping street," suggests Sandlau. Sit by the window in Zoo Bar, sip a glass of elderflower juice and watch the beautiful people pass by.

What to buy "A piece of clothing from Munthe plus Simonsen or By Malene Birger," says Sandlau.

Julie’s best list…
Where to stay "Celebrities and the fashion crowd stay at
Hotel Skt. Petri, with its spacious lobby and funky red, blue and white decor," says Sandlau. For more quirky surroundings, check into
Hotel Fox, where 21 international artists have decorated the 61 rooms. (Room 308 has a Mexican wrestling theme!) For traditional luxe, try
Hotel D’Angleterre — its Arndal Spa offers deep-tissue aromatherapy massages with custom-blended essential oils. If you’re a fan of functionalist
design, try the Radisson SAS Royal, the world’s first designer hotel. It was created by Arne Jacobsen — from structure to flatware — Room 606 still has the original Swan and Egg chairs he made for the hotel.

Where to eat Famous around the world for its open sandwiches (smørrebrød), Denmark has the most Michelin stars of any Scandinavian country — 10 in all. Chefs like
Noma‘s Rene Redzepi concoct culinary masterpieces with horse mussels, deep-sea crabs and langoustines from the Faeroe Islands or lamb, muskox and berries from Greenland. "One hot spot is
Extra, a tapas restaurant, lounge and nightclub," says Sandlau. Reserve the Stage Table for eight of your closest pals, and a personal chef will serve up tasting plates of suckling pig, crab and grilled tuna tapas. The new kid on the block is the Grill Bar, which is packed on weekends.

Nightlife "You’ll find the in crowd in Hotel Skt. Petri’s Bar Rouge," says Sandlau, where they lounge in low-slung black couches and listen to ambient jazz. Another hot spot is K Bar, which shakes up fresh blueberry caipirinhas and refreshing ginger mojitos. "In Copenhagen, clubbing starts around 1 a.m. and carries on all night," says Sandlau. Current favourites are No. 8 and glossy white Nasa. "If you’re looking for a great night out, with good music and dancing, head to
Vega or Rust," suggests Sandlau. "And after your all-nighter, knock on the back door of a bakery for a sweet, flaky pastry."