What a fashion stylist learned on a two-month trek to India and Bangladesh. 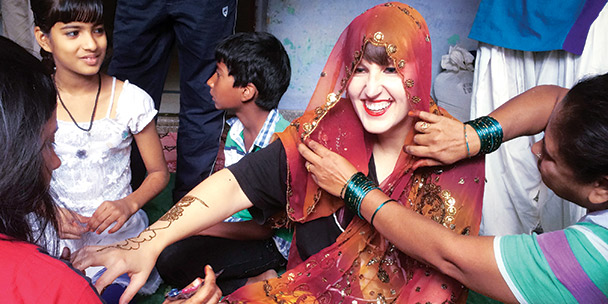 Nothing compares to the feeling of making someone else feel beautiful, which is the core of why I do what I do as a stylist and non-toxic-beauty advocate.

So when saying a friendly hello to a stranger on a dusty Jaipur street led to an invitation to join a local family for tea and a “makeover,” I put worries of a language barrier (and chemical sensitivities) aside and enthusiastically nodded yes to the role reversal that was in store for me. Fuelled by my curiosity and their kindness, the women of the family transformed me into their Indian ideal.

I stood out in India with my fair skin — which was opaquely whitened to a becoming shade of “mime” by non-nanoparticle, biodegradable SPF 50 sunscreen — and my go-to travel wardrobe: a men’s shirt, bike shorts and a high-fashion fanny pack. (Yes, there is such a thing.)

To these women, and surely to others, my appearance was alien. They laughed at my exposed legs and shook their heads at my closely shaven undercut. Several children gently reached out, giggling, to examine my fingernails, which I’ve always worn quite long.

They sat me on a mat in the centre of a common area, each taking part in my enhancement in some way. One woman attempted to get a comb through my hair, parting my heavy bangs down the centre and pushing them to the side to conceal the undercut, another liquid-lined my eyes and yet another reddened my lips with a tube of certainly-less-than-eco lipstick.

“When in India…” I thought, exhaling and renewing my silent vow to remain open to all, à la Anthony Bourdain. I couldn’t help but laugh when I considered my appetite for risk in the grander scheme. Wow. This was me living on the edge. Gamblin’! Gettin’ wild! But I do have beauty boundaries, and I had stepped beyond them.

Back home, I even feared the lead in my lipstick — I’m the girl with no chemicals in her house or makeup bag. I do sniff tests of cabs and restrooms for brain-bending air fresheners and ask assistants to avoid scents when we’re working closely. So India — with its perfumeries, diesel-fuel exhaust and burning-plastic street fires at almost every stoop — was a constant struggle for me.

The most elaborate and enjoyable element of my transformation was the mehndi. Using henna paste, the ladies turned my skin, from bicep to fingertip, into mahogany lace; the intricate designs were skilfully applied in bridal proportions. And the fresh lemon juice and eucalyptus used to activate the mehndi’s staying power was as therapeutic to me as the ladies’ artful touch, soothing the constant headache I had from the soot and smog and incense.

What followed, of course, once I returned to the streets, were many congratulations and well wishes for married bliss. This lasted for days and made me and my partner smile. We had met only six months earlier.

It was my work with Project 1127 that had brought us to South Asia. The brainchild of a dear friend, New York-based Canadian womenswear designer Laura Siegel, the initiative aims to raise both awareness about poor working conditions in garment factories and funds for the families directly affected by the devastating 2013 collapse of Rana Plaza in Bangladesh. This is done through the sale of limited-edition handwoven scarves, one for each of the 1,127 victims identified in the rubble.

As a committed activist, stylist for Project 1127 and associate producer of the Green Shows, New York’s eco-fashion week, I volunteered to help tell the tale of how the scarf came to be. So with my partner, Manuel Gonzalez Redondo, a photographer and documentary filmmaker, I geared up for a two-month trek in late 2014 to film The Story of a Scarf, a four-minute video (watch it at project1127.com and below) about where our fashion comes from: India and Bangladesh, rightful fashion capitals of the world. India is the world’s third-largest exporter of textiles and clothing, worth more than $46 billion annually in 2013; Bangladesh ranks fifth at more than $32 billion, according to the World Trade Organization.

We didn’t spend our time in India doing the downward dog in peace (although I do plan to return for this purpose one day); we were there to work. And the experience pushed me further than I’d anticipated.

India is a dichotomous place where opulence neighbours extreme poverty. Life unfolds in the streets as ladies draped in electric Pantone colours somehow remain pristine despite the crowds, the heat and the thick smog of tuk-tuk traffic hell. I stood at the edge of the Ganges, gobsmacked by the ways locals use the waters: for life, death and every process in between.

It’s the land of endless embellishment — and of designer Manish Arora, who, to me, represents the best of India — gilded and glittering, a magical, mystical place where clothing is an elegant celebration of colour, culture and craft.

We travelled across northern India to document Laura through her design process. We observed the ancient techniques of skilled artisans as they created the one-of-a-kind crafts featured in her collection. From block printing to bandhani — a detailed type of tie-dye in which thread is used to create thousands of tiny knots in the fabric — the labour can be arduous, finicky and slow going, but the resulting pieces are extraordinary and have an energy all their own, born of human hands and made with love.

Our time with Namori Manji Vankar, a fourth-generation master weaver for Project 1127, was perhaps our most cherished. We spent days watching him work with his entire family, a benefit of his home-studio set-up, which, he explained, allowed him to really know his children and play an active role in their lives.

He shared with me an idiom used to describe parents who must leave the home to work in garment factories: “Those fathers only know how long their children are,” he said, gesturing with his hands as if to show the size of a prize catch in a fish tale. “They only see their children when they’re sleeping.” He described the importance of honest work in a spiritual sense — how each thread connected him to God as well as the present moment. “You cannot rush or steal time when you work with your hands,” he said. “It’s all lost when man is replaced by machine.”

Clearly that’s not all we’ve lost. From the warmth and safety of Vankar’s home near the vast salt deserts of western India, we travelled to Rana Plaza in Savar, Bangladesh, the site of one of the deadliest structure failures in modern history, exactly 1.5 years after its collapse. If India was hard for me, I’m still unable to fully describe the challenges we faced in Savar.

I had received warnings from Sreepur Village, the local NGO partnered with Project 1127, that the area was politically unstable and that we were on our own if we wanted to try to shoot video. I released all expectations and informed the team that my partner and I ran the risk of returning from Rana Plaza without any photographic proof of our visit.

It was to be the apex of our journey, where I would come face to face with the darkest consequences of our consumption. I was inside out with empathy. We were trepidatious and respectful and, ultimately, surprised by the response we received. In both India and Bangladesh, the people we met were always so eager to share.

While those days were hard for me, I know they were harder for those we spoke to, so I bucked up. I experienced miracles in the form of survivors, permanently scarred and unable to carry on with life as they had known it but who stood before me nonetheless with the simple hope of having the site properly sorted, loved ones who still remained buried in the rubble properly laid to rest and adequate compensation provided for injuries, seen and unseen.

We met mothers — many mothers, some who visited the site daily — fathers, brothers, husbands. And then there were the children, many of them orphaned. At one point, it became too much. I excused myself hurriedly, completely overcome by the collective sadness, to be sick.

Our next stop was Assam, in northeast India, to learn about silk, which makes up about 50 percent of the Project 1127 scarf. In the conventional process, silkworms are boiled alive as a means of separating them from their pods, a part of the process called “degumming.”

But many of my eco-fashion friends choose “peace silk,” or “vegan silk,” for its consideration of the worm’s life cycle because they feel this is less cruel. For this process, farmers (or seri-culturalists, as they are properly known) gently remove the worms from their cocoons by hand so they can spin silk for several more cycles before reaching a purposeful fate as a dinnertime delicacy. To suggest that peace silk is better for the worm or, worse, that it is vegan, would be greenwashing indeed. But the process does exhibit a down-to-earth respect for resources, which is the root of any sustainable practice.

I went into this trip with an appreciation for the arts and the resources that go into making our stuff. My mother — a skilled stenciller, sewer and trompe l’oeil artist, baker and candle maker — is a master craftsperson by any definition. I, too, work with my hands and fuss over details that often go unappreciated. In the chaos and multicoloured clutter of India’s market mazes, my deep love of fashion could only be reinforced. It’s just that this love is trumped by a deeper desire to see a higher value placed on the things we wear and the hearts and hands that make them.

It was impossible for me to draw conclusions in the ever-changing enigmas that are India and Bangladesh. All I could do was assimilate, adapt and absorb without judgment, welcoming each experiential contradiction with the knowledge that no other adventure would take me as close to this divine style source or as far outside my comfort zone. I have grown through my discomfort, and I am grateful for all that South Asia has shown me.