How Maryam Siddiqi found a new home during 193 days of solo travel. 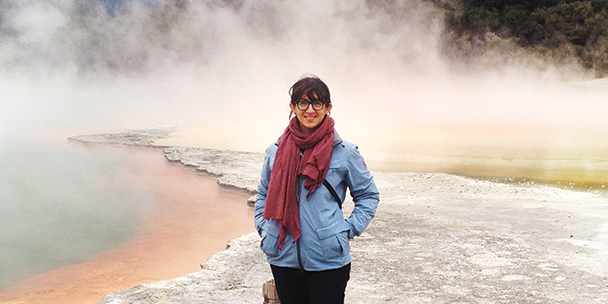 “If I never have to eat dinner alone again, it will be too soon” is the thought that ran through my head on a loop as I sat at a table for one in a desperately-in-need-of-a-renovation resort in the Whitsundays, a collection of islands off the coast of Queensland, Australia. In the restaurant that evening were families, couples and me – and a seagull. It was the only thing paying me any attention, although I know all it really wanted was my meal.

I was 84 days into seven months of solo travel and couldn’t have been much farther away from my family and friends in Toronto. I was tired, incredibly lonely and stuck with a butter knife to both cut my steak and fend off that damned bird. But every depressing dinner has a silver lining: That night, the Whitsundays were treated to a stunner of a moonrise, and I went to bed knowing that as low as I felt, it wasn’t so low that I couldn’t appreciate beauty and that every experience and encounter on this trip, good or bad, belonged only to me.

ENTER TO WIN: We’re giving away 4 epic solo adventures of a lifetime!

Six months earlier, I’d been laid off from my job as a newspaper editor. Because I’d been there so long, I received half a year’s severance pay. In my mid-30s at the time, I thought I’d probably never have the luxury of this found time and money again, so I began to plan a trip around the world – a sabbatical of sorts to relax and refresh. As for the next stage of my career, the only thing I was certain about was not wanting to go back to what I had been doing.

MUST–READ: Travel memoir: What a fashion stylist learned on a two-month trek to India and Bangladesh

Given the option, I would always choose to do this sort of trip with company. But I was single, and if friends weren’t tied down with work, they had spouses and children. So I sold my car, rented out my condo and bought a one-way ticket to Glasgow. My itinerary included some stops to see friends and family – in Scotland, Australia, South Africa and Malta – and major events, like Wimbledon in London. But the overarching theme of the trip was seeing new places. Of the 21 countries I would visit, 15 of them were new to me.

I set off with no expectations apart from some hope of finding love and a new career. (Spoiler alert: The first didn’t happen, but I found inspiration for the second.) I was not out to find myself; this wasn’t my own Eat Pray Love (although I learned quickly that there was no use telling people otherwise – they were going to think it anyway), and there was no universal question I needed answered. I simply wanted an adventure; if I had to embark on it solo, so be it.

As I said goodbye to my family and friends, I was told repeatedly that I was brave, a sentiment that was often echoed by people (usually men) I met while on the road. I didn’t think I was brave; I didn’t really have time to think about it. I was a woman travelling alone, but safety was never an issue. Sure, some places (like Turkey) came with warnings, but I approached them as I did every other destination: with wits, awareness and (sometimes faux) confidence. If you look like you belong somewhere and seem to know where you’re going, people tend to leave you alone. Besides, I was too busy walking and seeing and eating to realize that I had set myself quite the task.

Solo travel is work. Searching for the best, cheapest flight and figuring out where to stay, how to get around and how to choose good neighbourhoods isn’t easy. I had the scariest drive of my life on the winding roads in the Burren, on the west coast of Ireland. The car was wide, the road was narrow, the sheep were plentiful and I was driving on the opposite side of the road. I passed stunning vistas but dared not stop because I wasn’t sure I’d be able to start again. But with work comes rewards, and I received them in ways I would never have imagined.

It turned out there were benefits to being alone: I got to sit with the pilot in a float plane during a day trip to various points of the Great Barrier Reef. On an overnight train from Zagreb, Croatia, to Munich, Germany, the train steward let me have a four-person couchette to myself. I only realized this in the morning when people kept pouring out of the other cabins. When I decided that I really didn’t like Bali three days before my flight was scheduled to leave, I just camped out in my villa (which had its own pool) and indulged in the ridiculousness of travelling across the world to eat ice cream and watch Eat Pray Love. (Hey, it was on TV, and when in Seminyak….) Had I been with someone else, none of this would have happened.

I also made friends whom I likely wouldn’t have got to know as well had I not been by myself. A South African family I met while sailing in Croatia hosted me for dinners and hikes three months later when I made my way to Cape Town. An Australian couple refused to let me eat a meal alone while we were on safari for three days together at Londolozi, in South Africa’s Sabi Sand Game Reserve. And during an overnight bus ride in Turkey, I was affectionately, if a little forcibly, fed by the grandmother sitting beside me. Two nights later, on a different bus, I folded up my sweater and, using only gestures, told my 12-year-old seatmate to use it as a pillow so she could sleep. She was headed to Istanbul by herself. Now that’s brave.

I learned a lot of lessons along the way too: After living out of the same not-particularly-large suitcase for half a year, I now know how little I truly need. After helping an older Muslim woman secure a table at the food court in Dubai’s Mall of the Emirates during a Ramadan post-fast rush, I learned that a smile can say more than any amount of words can. And this may seem obvious, or even naive, but I discovered that, fundamentally, people are kind. Travelling alone placed me in an open position – strangers talked to me, shared with me and included me in ways they might not have if I’d been with someone else.

On a three-day sailing trip off the coast of Australia, I chatted with a fellow traveller, a Canadian woman 20 years my senior, about my predicament – or opportunity – as I tried to figure out what to do next with my career. “Go where you want to live, and figure out how to make money there,” she told me. This advice gave some structure to my thoughts, and I added another qualifier to narrow down my possibilities: Whatever was next for me, I had to be passionate about it.

While I hopped continents, I literally spent weeks trying to figure out my great passion only to realize I was already doing it – travel. (Talk about not being able to see the forest for the trees.) By comparison, deciding on the “where” was relatively easy. While I enjoyed New Zealand and adored South Africa, both were way too far from home. I loved London, but I had lived there previously and it is ridiculously expensive. But something felt right about Croatia, particularly Trogir, a medieval walled town on an island.

This tiny car-free town on the Adriatic Sea is the opposite in almost every way of my neighbourhood in the heart of Toronto. Centuries-old stone houses line a maze of cobblestoned streets, a lively fish market ensures that the seafood is fresh every day, what remains of a 15th-century castle is used as an outdoor event space for concerts and shows and it takes two hands to count the number of beaches nearby. Trogir’s inhabitants are friendly and helpful, its charm is ever present and its vibe is relaxed. Toward the end of my first visit of 10 days, I felt so at home that I declared, “I could spend a month here.”

Fast-forward two-and-a-half years to today and I’m back in Toronto, but I’m packing my suitcase to fly to Croatia, where I’ll finalize a purchase on an apartment in Trogir. During my travels, I learned that starting over somewhere new is an achievable goal. In New Zealand, I met a former commercial-airplane pilot who’d left his job to fly helicopters for a small tour company, and in Bali I met a Canadian who’d left corporate life to open a co-working space.

I’ve visited Trogir several times since returning home. Last summer, I rented an apartment there for four months to confirm that it was truly a place that I wanted to invest my time and money in. Being on my own again, I felt very lonely at times. I confronted the language barrier again and again, as I tried not to burden the few people I knew with being my perpetual translators. I bought pizza dough one day only to spend the night typing the Croatian package instructions into an online translation tool. At one point, I was so desperate for something to read that I took a 30-minute bus to Split, the neighbouring city, to buy an American magazine – for $16.

But, slowly, I started to meet people and pick up words and phrases. I was able to make (extremely small) small talk while passing people on the street and could ask for at least half my groceries at the farmers’ market in Croatian. By the end of the summer, I had a favourite beach, a favourite gelato spot and people to say goodbye to before I left. And a week before coming back to Toronto, I made an offer on an apartment. It’s an adorable 33-square-metre space that sits above the town’s gourmet food and wine shop. When you swing open the shutters, you have a view of cobblestoned streets. That was in September 2015; it’s mid-February as I write this, and I’m still finalizing the paperwork.

My plan – and this is how I finally sorted out the money-making part – is to split my time between Trogir and Toronto and establish both apartments as rentals when I am not there. This will also let me maintain a freelance journalism career. Trogir itself is a UNESCO World Heritage Site, but there are no major hotels there. The vast majority of holiday accommodation is via private apartments for rent. When I realized this, my plan solidified.

Back in 2013, Croatia was merely a stop in a series of stops, a place to catch some sun after a month in the rainy United Kingdom. Now, it is my home away from home and, if the apartment renovations are done in time, a place I hope to welcome people to this summer. I sometimes catch myself thinking about the 193 days I spent on the road. The journey has been neither straight nor easy, but what the past two-and-a-half years have taught me is that linear paths aren’t the only option – following curves has led me in directions I didn’t know were possible.

The aim is to promote and support Indigenous-owned businesses and attractions across Canada.