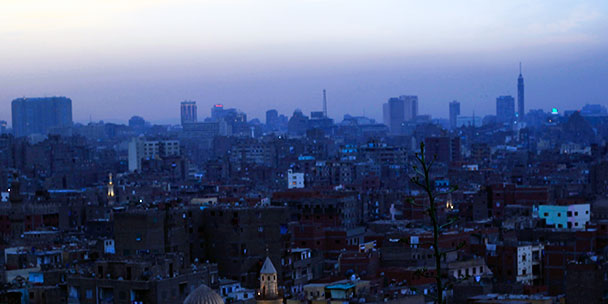 Theo and I sit in an open-air café on a street a few blocks from Tahrir Square in Cairo. Nearby, a man in his 20s hoists another guy onto his shoulders and someone shouts “Revolution!” “Oh, shit,” I say under my breath. “What the hell are we doing here?”

When I moved to England to do my master’s in the fall of 2011, I knew I wanted to travel over the winter holiday. I felt I hadn’t “earned” a homecoming yet because I had only been gone from Victoria, B.C., for two months. As it happened, my friend Theo was planning a trip to visit family in Ethiopia. So I did what any exiled wanderer would do: I asked if he’d like company. The cheapest ticket to Addis Ababa required a 22-hour layover in Cairo. We nabbed two.

We never intended to see the tourist sites. Instead, we wanted a day to wander – peruse a market and relax in a coffee house. But it was December 2011 – not the ideal time to visit Egypt. It had been 11 months since the removal of President Mubarak, and, in anticipation of the anniversary, the protests had started again. As the date of our flight approached, my dad emailed me news items with headlines like “Worst violence since the elections.” He also forwarded me a link to the Canadian travel-advisory website. And the Australian travel-advisory website. And the U.K.’s Foreign & Commonwealth Office website. “Continental Europe still has a lot to offer,” he wrote encouragingly.

But Theo and I remained undeterred. Before we left, I researched bus routes and copied a list of Arabic numerals into my notebook along with a reminder to “Avoid Midan Tahrir.” Wikitravel had posted this warning at the top of its Cairo page. The notification contained phrases like “tear gas,” “batons” and “likely to respond with deadly force.” The problem: Midan Tahrir is the centre of Cairo. Nearly every bus from the airport terminates there. Staying clear of this area is the equivalent of visiting Toronto while avoiding all the blocks in the downtown core from Front Street to Bloor.

Once we landed in Cairo, we headed to the bus stop outside the airport. Despite all the warnings, we knew we had to go through Midan Tahrir. We tried to match the windshield numbers to the symbols in my book, but that prompted a lot of second-guessing. (“Do the numbers read forwards or backwards?”) Ultimately, we consulted a man who spoke English. He pointed us to the right bus. Neither of us had a smartphone or a map of the city, so to avoid getting lost, we had to disembark where Wikitravel and my father urged us to not go: Midan Tahrir.

Except for one man grilling cobs of corn on the sidewalk, the streets were empty. We set out to find a caffeine fix; neither of us had slept on the red-eye. We eventually located a café a few blocks from the bus stop. Men smoked shisha on the sidewalk. They sipped porcelain thimbles of espresso. We sipped our own muddy thimbles, and around us the air thickened with apple smoke and roasted coffee.

Wikitravel had implied the area was a war zone. While the deserted streets did look eerie, we couldn’t tell whether people had vacated for demonstrations or simply midday prayer. I didn’t know Cairo enough to recognize what was normal, so I wasn’t too concerned. The city enlivened as the day continued. After the caffeine fix, we wandered to a nearby movie theatre. Given that we had so much time, and we were so tired, it seemed a safe way to rest. We fell asleep and never made it to the end of Sherlock Holmes – which I didn’t want to see anyway. I was hoping for a more local flick.

Then, refreshed from our nap, we explored outside. More vendors had collected on the sidewalks. They sold kushari, a rice, pasta and lentil dish, and hills of pita. I purchased a flatbread for the road – an elephant ear of dough, still soft with air. Before we knew it, the sun started to set, and we settled into a second café. It felt like we had wandered a long time down crooked roads and alleys, but we had not left Midan Tahrir. We ordered more coffees and dealt a game of crazy eights.

Then I saw something odd out the café window: a crowd. More pedestrians had filed into the streets as the workday ended, but, until now, they hadn’t assembled. A group waved posters as they walked and chanted in Arabic. They gripped candles. Theo and I watched for the end of the crowd, but it only grew larger. Most of the demonstrators appeared to be our age, and most were men, though more women marched in the group than I had seen all day. I had followed the revolution on the news in Canada, and I sympathized with the demonstrators and the pro-democracy uprising that became known as the Arab Spring. However, I could not help but wonder whether this protest would become unsafe. I felt nervous.

We decided we should leave. As soon as we exited the relative safety of the café, we found ourselves being jostled on the sidewalk. “We shouldn’t be here,” I said to Theo. As I looked back to the café, one of the men there raised his arms in the air and his expression indicated that he, too, was worried for us, but in the crowd, no one seemed to take any real notice of us. Still, we wanted to slip away in case it got violent, but there was nowhere to go. The demonstrators were marching to Tahrir Square – and our bus stop. We couldn’t remain on the sidewalk; we had large packs strapped to our backs and kept getting nudged and bumped. So we walked with the crowd. Two stupid tourists in a sea of Egyptian youth.

After walking with the group for a couple of blocks, we broke off and turned onto another road. However, this road was blocked off with wheels of barbed wire. Behind the wire, we could see riot police with harpoon-sized guns. I couldn’t stop thinking about my dad – how devastated he would be if something happened. What was I doing here? This was real life – not a news item I could peruse from the safety of my house in England.

Without any other option, we turned back toward the protesters. As we did so, I felt like a voyeur. I didn’t want to be. I travel to understand the world better. But how could I “understand” the outrage of the demonstrators after a few hours when I was basically just tripping through this place? Even after spending a few days or weeks somewhere, how could a tourist understand?

We eventually forked paths from the protesters and caught our bus – long before our 22 hours were up. Our layover in Cairo was truncated, but considering the circumstances, we felt fortunate to return to the airport with plenty of time ahead of our flight. As the bus pulled away, I looked out the window, searching for the demonstrators. Our voyeurism fell behind glass – it felt different now. We were still uninvited but also unnoticed: flies on the wall instead of in somebody’s soup. Outside, the city beat on. Vendors threaded between the vehicles with wheelbarrows of dates. A boy cycled by, a plank of wood on his head, its mountain of pita impossibly balanced.

This same sense of voyeuristic shame returned later that week in Addis Ababa as Theo met his aunts and uncles and I looked on. But as I got to know Theo’s family, I began to feel less like an uninvited spectator. They in­cluded me in coffee ceremonies. Theo and I fell into a rhythm of busing around the city, me with my notebook, so I could absorb the odd phrase of Amharic. However, I’ve not reconciled the relationship between being a traveller versus an intruder. I explore other cultures to gain new insight, but it seems that knowledge will always be fleeting – reduced to memories and single snapshots.