The dapper globetrotting designers on their casual-cool world wandering. 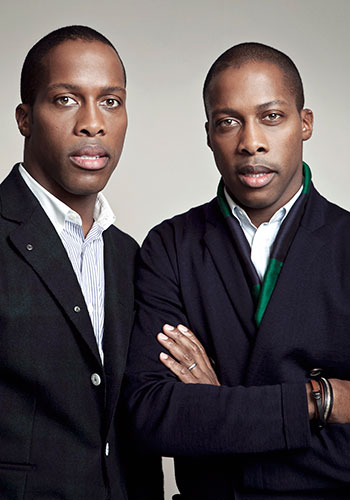 “We’re quite edited travellers,” says Dexter Peart of himself and his twin, Byron, who are co-founders and designers of the Canadian accessories brand WANT Les Essentiels de la Vie. Since launching their company in 2006, they have been continually tweaking their unisex products based on their own travel experiences, commuting weekly from Montreal to New York and frequently to Tokyo, Jamaica and beyond.

Case in point: This fall, they added a slit to their first bag, the Trudeau — a smartly crafted leather computer bag named after the Montreal airport — so it will sit more securely on top of a rolling suitcase. “The Trudeau has also gotten slimmer over the years as computers have gotten slimmer,” says Dexter. “When you’re sitting on a tarmac for three hours, you want something that will perform when everything else is going wrong — it gives you a little sense of having some control in a very uncomfortable environment.”

FAVOURITE GETAWAY Byron: “We are creatures of habit, so four times a year we go to the Round Hill resort in Montego Bay, Jamaica, where they know us.” Dexter: “It’s a beach, on a little hill, with a private bay. We stay in a villa with our own pool — it’s pretty perfect.”

TOP RESTO Dexter: “My wife and I have been going to Rockhouse Restaurant in Negril, Jamaica, for 15 years. We have gone seven nights in a row choosing different things on the menu — beer-battered snapper, curry roti — and have never been unhappy.”

DESIGNER DESTINATION Byron: “Tokyo is probably the only place in the world that every time I go there, without fail, I come back extremely inspired.” Dexter: “There’s this amazing huge department store called Tokyu Hands — the selection is just wildly wonderful. And there is a chain of bookstores called Tsutaya — we’re literally getting on the plane with two big bags of magazines and trend books.”

BUCKET LIST Byron: “We’ve been going to Japan for seven years, but — I’m kind of embarrassed about this — we’ve only been to Tokyo; I dream of getting outside the city. We’ve done collections inspired by Kyoto, but we’ve never been.”

INFLIGHT ENTERTAINMENT Byron: “We talk to each other the whole time—we can do 13 hours all the way to Tokyo.”

TRAVEL STYLE Dexter: “It’s all about having really lightweight footwear, lightweight bags, a lightweight boiled-wool jacket — things that are based on performance and function.” Byron: “Comfort is important when you’re sitting on a plane — I like nice pants in a natural fibre that are looser, so I feel light and easy without looking sloppy.”

WHAT TO PACK: THINK LIGHT AND EASY ESSENTIALS