The globe-trotting CEO on the future of travel – and more. 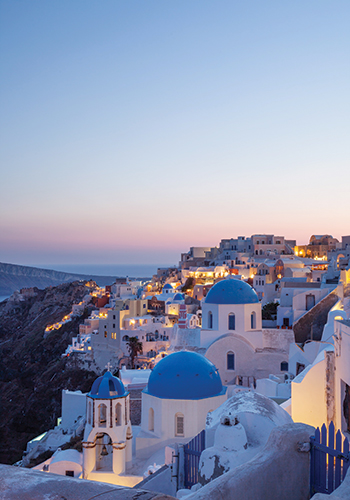 Ten years from now, travel won’t involve any paper, says Darren Huston, president and CEO of the Priceline Group and booking.com. “You’ll have no passport, no credit cards, no confirmation,” predicts the Amsterdam-based Canadian. “You’ll just have your phone in your pocket, and if you lose it, everything will be in the cloud.” Until someone invents teleportation, though, we’ll still have to fly – something Huston doesn’t actually like to do. (He makes the most of his air time by sleeping and working.) But for now, it’s the only way he can access all the local experiences he craves. “I like bizarre flavours and tastes. I’ve eaten ants in Nairobi, frogs in Vietnam and lots of strange things in China – I really enjoy that about travel.”

Comfort food: “In Amsterdam, if I feel homesick, I go to Restaurant Red. They only serve three things: steak, Canadian lobster and wine.”

Local fave: “Outside of Amsterdam is a little city called Delft, which is where Vermeer did his paintings. Everything still looks like it did in the 1600s.”

Greek treat: “One place I just discovered and should have already known about is the Greek islands. Mario Restaurant in Naousa is super authentic and has a wonderful evening vibe. It’s Greek food and the Greek islands at their best.”

Weekend getaway: “I like spontaneous travel. I used to be a very ‘Let’s plan two months ahead’ kind of person, but now I like making plans the week before. There are so many choices within two hours of Amsterdam. One weekend, I said to my family: ‘Why don’t we just go to Milan? I think the Expo’s on.’ We booked on a Thursday and ended up in Milan for two days. You have to be careful with flights, but in the world of hotels, prices sometimes go down at the last minute and you can get great deals if you’re not in high season.”

Best base camp: “I love finding independent properties that have really high ratings and ones that are a little more local and attuned to the culture of the city they’re in. I recently stayed at Hotel Cubo in Ljubljana, Slovenia – it’s right in the centre of town, and it was amazing. It’s the number one rated [booking.com] hotel in Ljubljana for good reason. Pre-technology, you would never have found places like this. You’d ask your travel agent, and they would have no idea. Technology now allows us to take a lot of good, calculated risks.”

Must-have tech: “I like to read good books and novels when I travel – almost always on a device. I have the newest iPad, but I wish they would take another crack at it and make it even lighter. It can still make my arms a little tired.

Huston’s "strange brew" travel habit
“As a Canadian, I love great beers. I especially like fruity-tasting beers like cherry, blueberry and blackberry. I don’t consider myself an expert; I just love exploring the dimensions of what’s out there.” Here are three of his global favourites: