A trip across Ireland reveals surprises beyond medieval ghosts and family ties in the landscape's most famous castles. 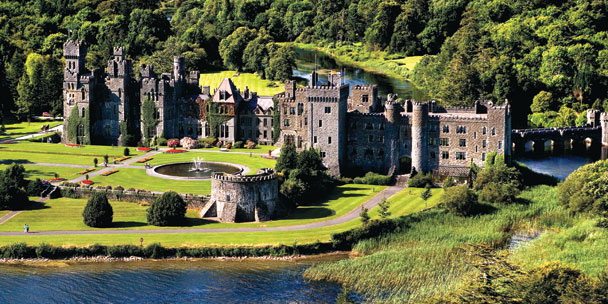 Ashford Castle dates back to 1228.

I’m standing in a muddy field in County Antrim, just outside Belfast, Northern Ireland, surrounded by hundreds of enraged sheep. They’re bleating violently, puncturing the peace of the
picturesque emerald countryside as if to say “You don’t belong here.” They’re right. My boyfriend, Erik, and I have ignored multiple “No trespassing” signs (and even hopped a fence) to search for the derelict remains of Shane’s Castle, my family’s ancestral château. You’d think the ruins would be hard to miss, but most Irish castles were built deep in the forest to protect against foes and deter starving peasants from begging at their gates. “Are sheep violent?” asks Erik, half kidding, but we feel like intruders.

It’s our first trip to Ireland, and since both sides of my family are descended from the Emerald Isle, Erik and I decided to spend the week driving from one side of the country to the other to discover my ancestral roots—and check out some famous castles along the way. We head back to the car and exit the castle’s outer gate, an imposing stone structure with the O’Neill family coat of arms—a red hand—showcased prominently in the centre. It’s not your typical family sigil: The legend goes that centuries ago, my great-great-grand-something raced an opponent across the River Liffey in a boat with the promise that whoever touched the soil first would win all of Ireland as a reward. My ancestor could tell that he was going to lose, so he chopped off his left hand and hurled it to the shore. He was named the King of Ireland and lived at Shane’s Castle, which is still owned by his descendants to this day.

It would be easy to dismiss this story as a tall tale that’s been enhanced over hundreds of years and just as many pints of Guinness, but I like to think it’s true. The Irish people we’ve met here are natural storytellers, happy to regale us with historical tales in their singsong accents. While horseback riding on a trail around the grounds of Castle Leslie, just south of Northern Ireland, our guide Dermot nods toward the large stone barrier lining the property of the castle. “That’s the famine wall,” he says affably. “During the great potato famine, starving people would line up there to beg for food. Once, a man from the village jumped the wall and stole a calf to feed his family.” My horse, Two-tone, grunts. Dermot lowers his voice. “The Leslie family beheaded the man as punishment and carried his head around in a cloth bag to warn others. That bag is still on display in the castle.” Yikes!

A few days later, when we pull up to Ashford Castle, a sprawling medieval pile in County Mayo, two hours from Castle Leslie, I nudge Erik. “I can’t wait to hear the story behind this place,” I say with a giggle, taking in the miles of manicured landscape peppered with enormous stone fountains. As soon as we walk inside, I feel a chill on the back of my neck. “Ashford is haunted,” I declare. Turns out I’m right. That night, during a decadent five-course meal at George V (the castle’s grand ballroom turned fine-dining restaurant), Martin, the maître d’ (a dead ringer for Downton Abbey’s Carson), tells us about the castle’s resident ghost. “One time, there were no guests in the castle, but the porter kept getting rung by room 430 over and over again,” says Martin seriously. “Every time we went up, there was no one in the room.” Suddenly, my char-grilled scallops are much less interesting than Ashford’s ghost. I coax Martin to continue and take a deep swig of Chablis. He leans in. “Many people who stay in that room overnight hear a woman’s voice asking ‘Where’s Elaine? Where’s Elaine?’”

That night, as I lie in a dark-oak four-poster bed, under a thick red canopy, I try to forget that our suite is 900 years old and—worst luck—directly under room 430. “Don’t be scared,” says Erik. “We’ll be fine.” Still, I insist on sleeping with the TV and all the lights on. The next morning, Erik tells me he had a waking dream that a woman came to our bedside. In spite of Ashford’s grandiose luxury, I’m eager to get somewhere that’s a little less haunted.

The most romantic proposal location in Ireland.

It’s our last full day in Ireland, so we decide to track down the Staffords, my mother’s side of the family. Our destination is Lismore, near the southern tip of the country, where my ancestors held a small plot of land during the potato famine before most of them immigrated to Montreal in 1874. The natural beauty in Lismore is staggering—the road we follow runs parallel to a gurgling brook surrounded by wild tulips and dense foliage in hundreds of shades of green. We locate the town’s cathedral and wander the rows of crooked tombstones, which are so old it’s almost impossible to make out their inscriptions. I find the grave of James Quinn, a distant relation, who was only 16 when he died in 1910. It’s covered in moss, forgotten and almost completely overgrown. I wonder how he died. Erik and I stand in front of his grave for ages, holding hands. Neither of us wants to disturb the stillness of the cemetery.

On our way back to the hotel, the GPS directs us over the top of a massive hill that overlooks all of Tipperary. It’s nearly dusk, so we decide to ditch the car on the side of the road and enjoy the sunset. There isn’t another soul for miles, just a flock of sheep. This time, they don’t seem to mind that we’re around. “It’s so beautiful!” I say, and turn to look at Erik. He’s crouched on one knee, holding a diamond ring. You see, while searching for my family’s past, I stumbled right into my family’s future.

History: Ashford (ashford.ie) was built in 1228 and purchased by the Guinness family in 1852. Famous guests include Ronald Reagan, John Lennon and even Brad Pitt.

What to eat: Start with a glass of bubbly in the sun room, and then head over to the George V dining room for an elaborate five-course meal (with wine pairings!). Chef Stefan Matez uses only locally sourced seasonal ingredients. Try the Irish beef fillet with girolle mushrooms and apple-lemon-scented potatoes, paired expertly with the 2008 Originel Merlot. It’s definitely more decadent than your typical roast.

What to do: Don’t leave Ashford without visiting the School of Falconry for one of its famed “hawk walks.” Each person is paired with a Harris hawk to take hunting in the forest around the castle. Don’t be alarmed if you find your hawk staring at you—hawks have extraordinary eyesight, and they will learn to recognize your face. Let them fly free among the old-growth trees—don’t worry, they’ll come right back again once they see that you’ve got food.

History: Sold to John Leslie in 1655, Castle Leslie (castleleslie.com) has hosted everyone from Sir Winston Churchill to Pope John Paul II. Paul McCartney even married Heather Mills in a lavish ceremony here. Don’t forget to say hi to 94-year-old Jack Leslie, a descendant of the original owners, who still lives at the castle.

5 PARISIAN PASTRY SHOPS to indulge in

What to eat: Start with a pint of Guinness by the fireplace in Conor’s Bar and then go to Snaffles for a modern fine-dining feast. The Irish lobster risotto in a brandy cream sauce is so good it will make you cry. Set on the mezzanine floor, the restaurant features a dramatic hand-carved ceiling and oak trim.

What to do: Explore the estate’s 405 hectares of sparkling lakes and greenery on horseback. The guides are well versed in the castle’s gory past, which makes for an entertaining (if slightly morbid) history lesson.

History: Kilronan (kilronancastle.ie) was built in the 1800s, and, as the ancestral home of the Tennison family, it’s one of the few castles in Ireland that can trace its history back to royalty.

What to eat: Start with afternoon tea in the Drawing Room and enjoy the view of Lough (Lake) Meelagh through enormous bay windows. For a feast fit for a foodie, head to the Douglas Hyde restaurant. Feeling adventurous? Try the wild boar for a real Game of Thrones experience. Finish it off with chocolate fondant and Guinness ice cream.

What to do: Check out the spa, a spectacular underground retreat that features marble floors, clean white columns and mosaic tiles. After a candlelit deep-tissue massage, finish your treatment with a dip in the hydrotherapy pool. A dungeon has never felt this chic.

The most famous castle of the moment: Downtown Abbey’s Highclere Castle

Okay, we know it’s not in Ireland, but if you’re in Hampshire, England, between May and September, why not sign up for a guided tour of Highclere Castle (highclerecastle.co.uk), where Downton Abbey is filmed? While you won’t find the Crawleys there, you might run into the Earl and Countess of Carnarvon, who live on-site—the castle has been in their family since 1679.