Sip on Chile's must-visit vineyards for a sweet and sultry vacation. 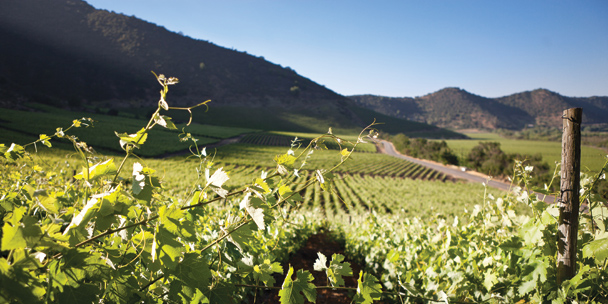 Chile is known for producing the once-rare Carménère grape.

"We’re in the clouds,” I hear someone whisper as I leave the Santiago airport in Chile. All around us, mist clings peacefully to the tops of mountains like cotton wool. Soon, though, I’m in the crush of Santiago, a lively metropolis of over six million people. I pass a stately sculpture park along the banks of the Mapocho River and a llama wearing a hilarious tiny hat outside the bustling fish market. I get lost in a swarm of balloons being released to celebrate the San Juan Bautista parade and consider stopping at one of the many street vendors to buy an empanada (a flaky pastry filled with, in this case, spiced beef and onions). But I haven’t flown nearly 9,000 kilometres to eat pastries—I’ve come to taste the wines that, since the ’90s, have made this sliver of a country famous.

Although Chileans have been making wine for nearly 500 years, winemakers there are still learning how best to exploit the unique growing conditions created by the confluence of the Atacama Desert, the Andes and the Pacific coast. While there are several regions scattered up and down the coast of the country, and pioneer developers are fighting over undiscovered territories, I’m focusing on those clustered around Santiago.

It’s easy to see how fast the industry—and the city itself—has grown when you visit Viña Valdivieso. Established in 1879 as the first sparkling-wine producer in South America, the vineyard used to lie on the outskirts of town. Now, the sloping Spanish-style building is practically downtown. As we walk through a dark room of blending tanks, my eyes stinging a little, chief winemaker Brett Jackson explains how much Chileans love to drink. (“When we drink—we drink,” a young Chilean later jokes. Wine, sure, but also fortified-spirit Pisco mixed with Coca-Cola, since Chile is the third-largest consumer of Coke in the world.) Valdivieso’s founder purportedly died at one of his blowout parties by falling down “that elevator shaft over there,” explains Jackson.

Major wine producer Santa Carolina has also been consumed by urban sprawl. Though the chic offices were almost completely destroyed by the massive earthquake that rocked the country in 2010, the traditional cellar—built using sand, egg whites and coal in the late 1800s—was completely unharmed and is now a national monument. The Santa Carolina team is standing there beaming with pride as we step inside. Chileans, it seems, are fiercely nationalistic. (After all, the government issues tickets to houses that don’t display flags on Independence Day.) When I take a sip of Santa Carolina’s Herencia wine, I’m washed away by the elegance and concentration. I’m starting to think that Chileans’ pride is totally justified.

Chile’s most popular vineyards on the next page…

The estate house at Tarapacá is the perfect place to fall into bed after a long, wine-soaked dinner.

The country seems to be made up of one large panoramic vista. At the MontGras estate in Colchagua, for instance, I stand on a lookout tucked into imposing mountains carpeted in vines. With a glass of Antu Syrah in one hand, a squid and olive empanada in the other, the sun on my face and a Chilean alpaca-wool hat on my head, it seems this country’s altitude might actually make it closer to heaven.

After driving through fields of blossoming apple trees, I arrive at Tarapacá in the Maipo Valley. Nestled in the coastal mountains, this region is warmer—perfect for growing fruity reds like Cabernet Sauvignon. “The more I learn about wine, the less I think I know,” says head winemaker Ed Flaherty, who hails from California. In trainers and khakis, he looks like he has lost his way from Silicon Valley. As we wait for a lamb to cook over an open fire outside, we taste this year’s Merlot, still housed in 40,000-litre tanks. Pouring a little of the murky wine into a cup is like tapping the world’s biggest keg. It’s a touch funky. “Barnyard notes,” the wine rep explains with a wink. “Could be a good thing, though.”

The road is lined with wildflowers, a sign of spring, as we arrive at Concha y Toro—one of the largest vineyards in the country. Head winemaker Ignacio Recabarren greets a small group for a formal tasting. He is a celebrity in the wine world and, fittingly, bears a striking resemblance, in both manner and tan, to the great Valentino. Yelling for his assistant, Massimo, to pour a Sauvignon Blanc that has seen the inside of a bottle for only 50 days, he exclaims, “It’s not even a baby—it’s a fetus!” We’re sipping and spitting a Pinot Noir when he locks eyes with me and shouts: “And you? What does this wine mean to you?” Spitting out the last few drops, I offer a quiet “It’s quite plummy.” He seems pleased. When a wine writer in the group thoughtfully swirls his glass and likens its contents to “a mischievous kid in class who is looking for attention,” Recabarren claps his hands. “Brilliant! Just brilliant!”

In fact, the Chilean winescape is a fascinating study in contrasts. While Recabarren, that emperor of wine, reigns over Concha y Toro’s delicious Don Melchor Cabernet Sauvignon, a different scene plays out about an hour away. Alejandra Gutiérrez is the lovely soft-spoken sommelier at Loma Larga, where the hand-harvested wine isn’t shaped by market demand but, rather, the terroir—a small misty valley that produces a startling cold-climate Malbec. Likewise, at Anakena in Cachapoal, South African winemaker Gavin Taylor explains that “wine is made in the field; it’s where art and manual labour come together.”

Chile’s local hot spots on the next page…

The rooftop pool at the Ritz-Carlton Santiago.

A lot of work has gone into making Chilean wines what they are today. “We made a lot of mistakes,” says winemaker Andrés Ilabaca Andonie of Viñas Santa Rita. Up until the mid-’90s, the then rare Carménère grape was confused with Merlot. When the flub was discovered—at Santa Rita, Ilabaca Andonie assures me—a new era of wine was ushered in. Smoky and full of spicy notes, Carménère has become the signature grape of Chile (although the assertive Cabernet Sauvignons that originally put Chile on the map are still wildly popular).

These days, there is even more innovation going on in Chile. Major vineyards like Cono Sur have rolled out intensive organic programs. And Montes in Colchagua has turned to planting gravitational vineyards and using feng shui to help produce its hand-harvested wines. Standing in Montes’ cellar, where, I’m told, Berlin’s philharmonic orchestra was invited to play, the winemakers play Gregorian chants to the barrels, which sit primly like parishioners in pews. They swear the music affects the final palate of the blends. I’m strangely touched by the quiet, dimly lit beauty of it all. “Maybe I’m drunk,” I joke to one of the vintners. He shakes his head solemnly as if he has been waiting for a chance to explain Chile’s effect on people. “This is not a wine factory,” he says. “This is a place full of life.”

Where to stay
Take in a view of the Andes mountains from the rooftop pool at the Ritz-Carlton Santiago (ritzcarlton.com), order a Pisco Sour and tapas at resto Arola while listening to the DJ spin by the open fireplaces or just sleep off your indulgences in one of this grande dame of a hotel’s plush beds.

What to see
Bankrolled by a textile tycoon, Museo de la Moda (museodelamoda.cl) boasts an impressive collection of more than 10,000 pieces worn by icons like Marilyn Monroe and Princess Diana.

5 things to do in NEW DELHI

Where to dine
Sit down to Chilean abalone and squid-ink risotto with sautéed seafood in Chardonnay and Parmesan in the swish House Casa del Vino restaurant (housecasadelvino.cl) on the Morandé estate in Casablanca Valley. After lunch, browse in the gourmet shop attached to the restaurant and pick up a bottle of extra-virgin olive oil made from neighbouring olive groves.