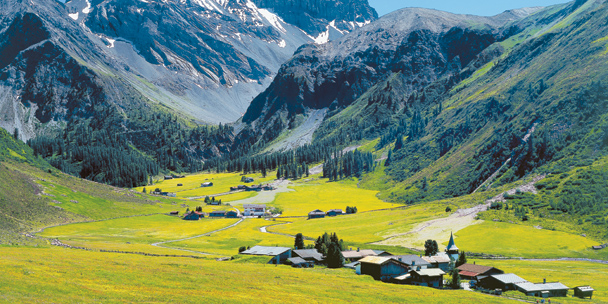 On a cloud-free day, you can see the Alps from almost anywhere in Switzerland. Image courtesy of Switzerland Tourism.

It’s the smell that hits you first. I catch a pungent whiff as soon as I step into Le Chalet restaurant in Gruyères, Switzerland. “Something in here stinks of feet,” whispers my husband, Erik. The culprit is actually the very cheese this tiny medieval village shares its name with—a salty, assertive fromage that’s been produced in the region since 1249. Funky smell aside, the pots of bubbling Gruyère fondue being devoured by the people around us look decadent enough to make your mouth water.

It’s day three of our culinary tour of Switzerland, and Erik and I have vowed to sample every Raclette, Vacherin and Emmental the country has to offer. We’ve been travelling by train over and around the Swiss Alps, stopping to taste local delicacies at chocolate factories, vineyards and dairy farms alike. Many of the Swiss people we meet are impressively cosmopolitan, draped in Hermès scarves, teetering along cobblestones in Prada kitten heels and switching languages seamlessly, almost without noticing—from English to French to German and then back again. In fact, everything in Switzerland has an air of decadence, from the ornate baroque buildings to the historic clock towers that stand guard over ancient city streets. But most impressive of all is the food—rich, calorie-laden (in the best way!) and often washed down with a beautiful glass of Pinot Noir.

Back at Le Chalet, we’re led by an aging Swiss milkmaid to a tiny table in front of a roaring fireplace. Outside, the snow-capped Alps are so picturesque, they look like a Hollywood backdrop. “We have the best fondue in all of Gruyères,” she tells us with a wink. Soon, a giant hotpot of melted cheese comes out, alongside a homemade loaf of crusty bread and a half-litre of crisp Swiss Rauschling white wine. The first bite is intoxicating, and before long we’re mopping up the exquisite dredges with our bread.

The Swiss take their cheese seriously. At the Emmental Show Dairy, just outside of Bern in Emme Valley, I make the mistake of requesting some of the leftover petit-lait—the watery milk that runs off cheese during the production process—to take back to my hotel. I’m not trying to be gross—rather, I want to conduct a historical beauty experiment. Legend has it that Cleopatra used to bathe in vats of petit-lait to keep her skin looking youthful. Our tour guide, however, is scandalized. “Absolutely not,” she says in a tone that makes it clear there’s no room for negotiation. Apparently, I’m not the first to make this unorthodox request. “The French tourists always ask for it too,” she says.

I’m slightly surprised the Swiss haven’t started selling vats of petit-lait, considering how dedicated they are to other more, er, unconventional beauty treatments. Nearby Montreux is famous for its discreet clinics that offer experimental regimens—like the sheep-placenta facial. You read that right: The procedure, which is reportedly a favourite among celebs like Victoria Beckham, uses purified stem cells harvested from the placenta of New Zealand sheep to revitalize skin. “Rich women tell their friends that they are going on vacation out of the country for a couple of months,” says Joanna, our city guide. “Instead, they check into a spa clinic. There are top chefs and state-of-the-art gyms, so the rich women, they drop 20 pounds and get pampered from head to toe. They come out glowing.” She laughs. “If you were rich, wouldn’t you do it too?” I laugh with her and then stop. Because after a week of feasting on Gruyère fondue and nibbling on Emmental and crackers, I realize Joanna certainly has a point.

Hot spots to see in Swtizerland on the next page…

Bern’s Hotel Allegro is a sight to see.

Where to stay
Not only do the rooms at the Hotel Allegro (kursaal-bern.ch) boast views of the Bernese Alps and the historic old town but there’s a casino too.

What to do
Visit the historic Zytglogge clock tower (zeitglockenturm.ch) in the centre of town. Built in the 13th century, it was used as a women’s prison until, legend has it, an angry inmate escaped in 1405 and burned down most of Bern’s downtown as revenge for her incarceration.

Where to dine
The Klösterli Weincafe (kloesterlibern.ch) has a carefully curated selection of wines, specialty cheeses and dry-cured meats. The menu is only available in Swiss German, but don’t worry: Servers are used to patiently translating dishes to tourists.

Where to stay
The Beau-Rivage Palace (brp.ch), a luxe five-star property that overlooks the shores of picturesque Lake Léman, has hosted everyone from Coco Chanel to Nelson Mandela.

What to do
Take a short train ride to Chexbres-Village and visit the Lavaux Vineyard Terraces (jomini-vins.ch). This UNESCO World Heritage site offers a panorama of the Alps and Lake Geneva—not to mention a number of delicious wines.

Where to dine
Café de Grütli (cafedugruetli.ch) may not look like much from the outside— its modest family-style seating and checkered tablecloths don’t exactly denote fine dining—but the food is among the best in all of Switzerland. Try the bratwurst and beer: It’s not fancy, but it’s comfort food at its best.

The best RETREATS IN SPAIN

Where to stay
B2 Boutique Hotel (b2boutiquehotels.com) is a sprawling brewery turned 60-room boutique hotel perched on the top of the Hürlimann-Areal hill.

What to do
Take in a matinee at the Zurich Opera House (opernhaus.ch), an ornate neoclassical building that overlooks Lake Zurich.

Where to dine
Kaiser’s Reblaube (kaisers-reblaube.ch), housed in a building dating from 1260, features fresh-from-the-market Swiss dishes lovingly made by chef Peter Brunner. Splurge on the five-course menu—the turbot poached in olive oil is famous all over Zurich—and finish off with the crème brûlée, which is infused with sweet woodruff.