Falling for Hawaii’s captivating mixture of the kitschy and the exquisite. 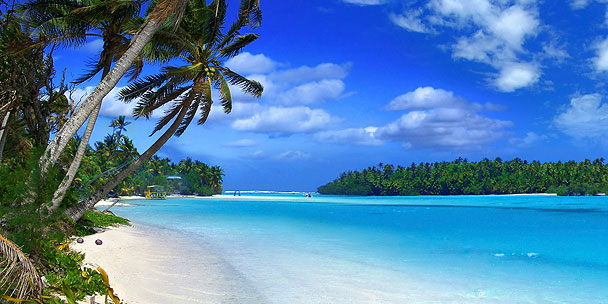 The traditional spirit of “aloha”— a word that means “hello,” “goodbye” and “love,” as well as a sort of universal benevolence—is still alive in Hawaii, despite the incursions of the modern world. Hawaii is a special place—not just because of its beauty and isolation but also because of the friendly inclusiveness of its crazy melting-pot culture, which has been influenced by waves of visitors ever since Captain Cook stumbled upon it in 1778. Like the music, clothing, hula dancing and surf culture, the food has absorbed elements from Polynesia, Asia, Europe and mainland America to create a unique mix of the kitschy and the exquisite. On Hawaiian menus, super-fresh creations like ahi poke (spicy raw-tuna salad) and exotic fruits share space with fried Spam sushi and the infamous plate lunch: rice, macaroni salad and an entree that could be anything from teriyaki salmon to loco moco (a hamburger topped with a fried egg and gravy—no wonder the muumuu was invented here!). And you won’t be allowed to leave Hawaii without trying “shave ice” (a snow-cone-like concoction flavoured with fluorescent fruit syrups or azuki beans).

OAHU
Start your visit in Honolulu, where you’ll be intoxicated by the fragrant air the moment you step off the plane. The city is wedged between rainsoaked mountains and dry shoreline, which means rainbows every day.

Where to shop
The neighbourhood of Waikiki is not only kitsch central but also, strangely, a mecca for designer shopping. The streets behind the famous beach are lined with Cartier, Fendi and Hermès boutiques, as well as surf shacks, mai tai bars, craft shops selling handmade quilts and ukuleles and the ubiquitous ABC Stores, which sell everything from vibrant aloha shirts and glossy Kukuinut leis to Kona coffee and Obama bobblehead dolls, in honour of the state’s most famous son. Occupying the middle ground is Blue Ginger (blueginger.com), which features locally designed sundresses and sarongs in soft pastel colours.

Where to stay
The lavish Hilton Hawaiian Village complex (hiltonhawaiianvillage.com), which contains 14 restaurants and 90 shops on nine hectares of Waikiki beachfront, is a choice destination in itself. There are six pools, as well as gardens with hibiscus, exotic birds and even penguins.

What to do
Take surfing lessons at the beach where legendary athlete Duke Kahanamoku caught his first waves, or embark on the Atlantis Submarine Adventure (atlantissubmarines.com), which travels 30 metres below the ocean’s surface to watch giant turtles, reef sharks and brightly coloured fish darting around artificial reefs.

More on Hawaii’s attractions on the next page…

The Hilton’s Waikiki Starlight Luau serves up a traditional Hawaiian feast of roasted kalua pig, purple sweet potatoes, steamed fish and poi (a paste made from taro root), accompanied by hula dancers who tell the history of Hawaii with their fluid and fiery moves. Or sample the daily catch while watching the sun set at the beachside Tropics Bar & Grill (2005 Kalia Rd.), which specializes in locally sourced ingredients like Kona sea salt and Hamakua mushrooms. At the other end of Waikiki, Leonard’s Bakery (933 Kapahulu Ave.,

leonardshawaii.com) is the place to get the coveted warm malasada doughnuts originally brought to Hawaii by a Portuguese immigrant.

The north shore
Each Hawaiian island has its own personality, but even the rest of Oahu is different from Honolulu. After a sobering visit to the USS Arizona Memorial at Pearl Harbor, a short drive through mountains and pineapples fields brings you to Haleiwa, the hub of the north shore’s hippie surf culture. During winter, waves can reach nine metres; when surf’s up, everyone heads to Sunset Beach or the Banzai Pipeline to watch daredevil surfing competitions. Haleiwa’s Kua ’Aina café (kua-aina.com) is famous for its burgers and giant mahi mahi sandwiches with Ortega peppers and Maui onions, or stop by Romy’s Shrimp Truck on the road back to Honolulu for justcaught shrimp fried in garlic butter.

Discover more about ‘The Big Island’ on the next page…

Bliss out: The world’s best spas

On Hawaii (a.k.a. “the Big Island”), the Kilauea volcano has created 245 new hectares since it started erupting in 1983, making the island seem like a wild work in progress. As you approach the open-air Kona Airport, fields of black lava stretch into the distance; Hawaiian graffiti artists create messages on them using white coral. The island has an astonishing 11 climate zones—from near desert to grassland, rainforest and even snow atop Mauna Kea (the world’s tallest mountain, if you count from the ocean floor)—and beaches that range in colour from white and pink to black and even green.

Where to stay
At the luxe Hilton Waikoloa Village (hiltonwaikolovillage.com), on the Kohala Coast, your swimming choices include a pool with a waterfall and a saltwater lagoon; you can also rub a dolphin’s sleek belly and toss her a fish at the onsite Dolphin Quest facility. Try a traditional Lomi Lomi massage (a divine cross between shiatsu and Swedish massage) at the lavish Kohala Spa, and then curl up in an oceanside cabana and listen to the waves rolling in—you’re on Hawaii time now. And if you’re too laid-back to walk to your room, step into the gleaming water taxi and cruise the canal that winds around the grounds, admiring the bejewelled flip-flops you picked up at the resort’s Sandal Tree shoe store.

What to do
Go snorkelling off the black-lava coast on an Ocean Sports day cruise (hawaiioceansports.com). A catamaran departs from the beach at Anaeho’omalu Bay, a short walk down the ancient coastal path from Waikoloa, which winds past restored fish ponds and petroglyphs. Or head out on Hawaii Forest & Trail’s Kohala Waterfall tour (hawaii-forest.com), which takes you on a bouncy drive across fields and streams and then on a hike through the gorgeous Pololu Valley, where you can swim under a waterfall and see spectacular vistas along the northern coastline. While that part of the island is road-free, you’ll need a car to visit Hawaii Volcanoes National Park’s Crater Rim Drive, which circles Kilauea’s summit and provides access to several hiking trails—some of which have to be redirected occasionally to avoid the lava flow. You can also visit two less active volcanoes: Mauna Loa, where you can see birds that exist nowhere else at Kipuka Puaulu Bird Park, and Mauna Kea, one of the best spots on earth for stargazing. There are 13 giant telescopes and no light pollution to spoil your view of the universe.