This luxury resort is like vacationing on another planet

If your ideal getaway is in the middle of nowhere, Amangiri is for you. 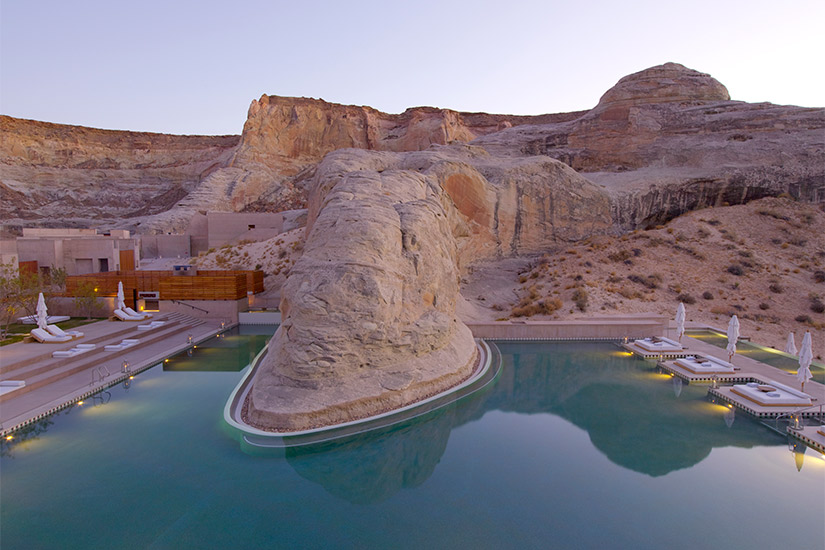 I’m terrible with directions, and driving outside city limits causes visions of horror-movie scenes and serial killers to dance in my head, so when a staff member buzzes me through the rustic-chic gates of Amangiri resort in rural southern Utah, I’m practically rehearsing my “driver of the year” acceptance speech.

Then I get lost. Amangiri is located on the Colorado Plateau, a pristine desert in the American southwest, so it’s dark out—like, 2003-Ontario-blackout kind of dark. I inch my car forward along the miles of winding lanes on the property, reassuring my increasingly panicked self that I’ll eventually be found by the staff. Finally, I make the correct turn and the resort shimmers in front of me, its sun-bleached walls rising out of the sage and brush in perfect harmony with the sandstone mesa.

Enter the #Amangiri Suite through a private courtyard which extends around the suite to an infinity swimming pool. @jordanalongo #AmanResorts #AmanDesign #AmanLife

It’s really hidden—which is kind of the point. Amangiri’s isolated surroundings make it a favourite of celebs seeking a reprieve from thirsty paparazzi. (You may recognize it as the backdrop for many a Kardashian family trip. And Rosie Huntington-Whiteley visited a few days after me.) The minimalist design has practical purposes too. The resort, built in 2009, was designed to have as little impact on the surrounding moonlike landscape as possible. It was ac-tually built around the terrain—specifically, a giant outcropping now in the centre of the property. Legend has it that Adrian Zecha, co-founder of the resort’s parent company, Aman, was hiking in the area when he saw a curved, jutting rock and said, “We’ll put the pool here.” (He has since sold his stake in the company.)

After my navigation fail, I’m content to just drop my stuff and spend the next few days relaxing on a lounger near the heated water, but in Utah, hiking is a religion—and it turns out I’m an easy convert. The next day, after a sunrise yoga session that I surprise myself by waking up for, I call upon my inner Cheryl Strayed and join a guide on an hour-long hike to a cave that contains protected 8,000-year-old relics from indigenous tribes who used to live here. (More-hardcore excursions are available. This part of Utah, near the Arizona border, has the highest concentration of national parks in the United States.)

All this activity leaves me with sore muscles—or at least that’s what I tell myself as I head to the Aman spa for a deep-tissue massage and sauna. Because Amangiri is built on Navajo land, the treatments incorporate trad-itional Navajo healing practices, like smudging, taught to the staff by local elders.

This connection to the earth in quiet solitude and reflection is exactly what Amangiri is all about. There are just 34 suites on the property. Staff out-number guests by four to one and are at the ready to accommodate any ask. (One drove an hour into town to get a guest a charger. And they even cleaned the Starbucks cups out of my car.) But it’s the views that really get to you. I’ve never felt so small and unimportant—and I mean that in a good way. On my final day, I wake up early to watch the sun rise over the craggy desert before hopping in my car and reluctantly driving to the airport. This time, I’m hoping I get lost so maybe I can just stay here forever.

How to get to Amangiri

You can land your helicopter on-site. There’s also a municipal airport about 30 minutes away if you want to take your jet out for a spin. Or you can fly to Vegas and drive four hours through terrain that dates back 165 million years. I recommend detouring through Zion National Park for the larger-than-life views. I also stopped at Coral Pink Sand Dunes State Park, named for its pretty pinkish sand.

December is low season and a bit chilly (around 0˚C) but nothing like Canadian winters. Your best bet is April or May, before it gets too hot and tourists flood the national parks.

Utah is a Mormon state, so you can’t order alcohol unless you order food too. This is not the place to relive spring break.