These islands are one of the world's best-kept secrets

See it now before the hordes arrive. 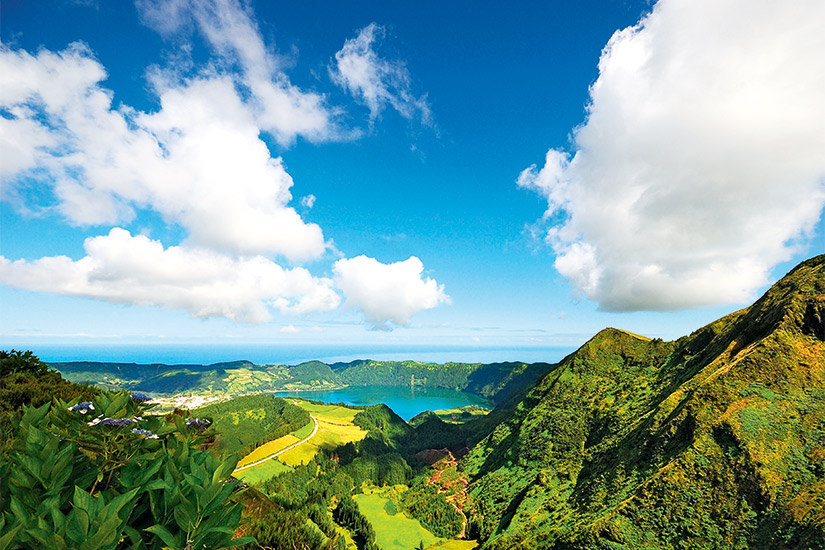 Consider the Azores that familiar-sounding place that you just can’t…place. The remote Portuguese islands are a little under the travel radar, so it’s not surprising that their coordinates don’t immediately spring to mind. An archipelago of nine verdant, rocky islands about 1,500 kilometres west of Portugal, they are the result of volcanic activity millions of years ago and now home to around 250,000 people. They’re also the stuff of legend: Before science proved otherwise, some thought the Azores were the lost civilization of Atlantis. (There are still a few diehard believers.) While the islands each have their own distinct character, all are green and lush and rife with waterfalls, hot springs, flowers, volcanic lakes and rolling hills, with nary a buffet-tastic all-inclusive in sight. The pristine towns are full of historic buildings, vibrant fruit and veg markets, beauti­fully maintained cathedrals and chill sidewalk cafés. It’s everything you love about Europe, only on windswept little islands in the middle of the Atlantic.

FOR THE STOPOVER CROWD: SÃO MIGUEL

This is the jumping-off point for most visitors. It’s home to the Azores’ capital city, Ponta Delgada, miles of rugged coastline and hydrangea-lined roads and twee towns. But it also offers a cosmopolitan experience you won’t get on the other islands: more fine dining (though there’s still a selection of really good holes in the wall, like Taberna Açor, a tiny gem serving local fare), higher-end hotels and fun bars and clubs. (The rooftop bar at the Azor Hotel is very cool and swish and has a pool with a view.)

MUST-DOS: It doesn’t have jets, but the natural hot tub at Caldeira Velha does have the advantage of thermal mineral waters and being surrounded by mossy rocks and giant ferns. Another pool, a two-minute walk up a jungly path, is larger and fed by a waterfall; it’s not quite as warm, but it’s a sexy setting right out of a Bachelor highlight reel. A short drive away is the lookout point Miradouro de Santa Iria; its sweeping views of coastline guarantee frame-worthy pictures. For a completely different kind of soak, head to Ponta da Ferraria on the west coast. This natural pool at the ocean’s edge is constantly fed by hot springs beneath the surface, so you can sit in warm, therapeutic waters while the waves crash a few metres away.

A clifftop church in São Roque.

A short flight from São Miguel is Faial. Horta, the postcard-pretty capital, is a regular stopover for yachters crossing the Atlantic. The harbour and long pier have been transformed into an open-air gallery by said yachters, who have a tradition of creating paintings bearing the names of their vessels. Nearly every surface—walking paths, walls, rocks—is covered with their artistry. A lovely old bar opposite the harbour, called Peter Café Sport, is a go-to spot known for its gin and tonics (with good reason—they do a version with local passion-fruit gin that’ll ruin all future G&Ts for you).

MUST-DOS: Trails near Praia do Norte will take you through lush forest and tiny villages with tiny houses to a black-sand beach overlooked by grassy cliffs. Go to the Capelinhos volcano to see where a 1957 eruption added 2.4 square kilometres to the island (and buried hundreds of local homes in ash), and then nerd out in the visitor centre.

FOR THE WANNABE SOMMELIER: PICO

Unexpectedly, rocky, weather-beaten Pico is nicknamed “the island of wine.” Centuries ago, newly settled monks (who’d brought their oenological know-how with them) developed an ingenious way for grapes to thrive in the dry, windy environment: row upon row of stone walls that protect the vines and create a greenhouse effect to boot. The island’s whites and rosés are the ones to try (recommended: the Azores Wine Company’s Arinto dos Açores 2015 white).

MUST-DOS: Climb the (dormant) volcano the island is named for. It takes about three hours to get to the top, but the views are spectacular and the exertion will justify the evening’s local-wine indulgence. Go whale watching—the Azores is one of the best places in the world to do this. Sperm whales are the most common species in the area, and there are countless dolphins waiting to entertain you.

FOR A DETOX AFTER THE WINE TOUR: TERCEIRA

My guide in Terceira repeatedly referred to the island as “paradise,” so it might have been subliminal messaging, but a few hours into my visit I was convinced. At 30 kilometres long, it is the third-largest of the group and home to Angra do Heroísmo, the Azores’ oldest city and a UNESCO World Heritage site: an oasis of cobblestoned streets, buildings painted in pastel and jewel colours, manicured gardens with black-rock-and-white-mortar walls and views of the sparkling Atlantic.

MUST-DOS: The island is edged by lots of natural swimming holes—go to the ones in Biscoitos, scuttle into a sunny spot between some boulders and stay all day. And don’t miss Algar do Carvão, the hollowed-out “chimney” of a volcano that last erupted 2,000 years ago. You can walk around this enormous cavern and see where flowing lava final­ly slowed its path and hardened for eternity into various rock formations and walls that look almost painted in earthy colours, a result of different types of minerals in the rock.

Some of the island’s brightly coloured homes.