The Wild West: Escape to the Yukon 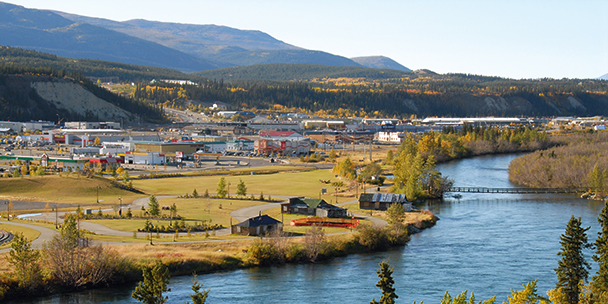 Whitehorse, the Yukon’s capital city, is built along the banks of the Yukon River.

SMELL: Whitehorse
Within 15 minutes of arriving in the city, I was inhaling the savoury steam of a sizzling cross-rib elk roast at the Fireweed Community Farmers Market along the banks of the Yukon River. Chef Michele Genest was searing the meat before tucking it into a Le Creuset pot with root veggies, spruce tips, juniper berries and Labrador tea – an herb that grows wild in the boreal forest – along with a splash of local stout and espresso.

“People here are more willing to experiment with wild foods, and braising is a good way to work with wild meat,” explained the author of The Boreal Feast: A Culinary Journey Through the North to onlookers at her plein-air cooking workshop. (If we wanted to have a taste, we’d have to come back in three to four hours to sample the finished product.)

Those meaty scents mingled in the fresh summer air with those of Indian samosas, Mexican tacos and yeast – thanks to the whole-wheat loaves and berry pies from the Home Sweet Home Baking stand. Given Whitehorse’s location north of the 60th parallel, I was surprised to see stacks of vibrant-hued local carrots and red potatoes. On the August day I visited, there was even a busker selling homegrown lettuce out of his guitar case for $5 a (giant) head.

It turns out that this city of close to 30,000 is the warmest spot in Canada’s North due to its location in the protected Whitehorse valley. It also has more than 20 hours of summer sunshine a day, which supercharges its otherwise short growing season.

MUST-READ: Inspiring Instagram accounts that make you want to travel

The 11 peaks along Mount Logan’s granite summit rise more than four kilometers above the St. Elias Icefield, which is Canada’s largest.

SEE: Kluane National Park and reserve of Canada, 160 km west of Whitehorse
For a moment, it looked like a whiteout. “We’re climbing into the sun, but we’ll turn shortly,” explained Tom Bradley, a pilot with Icefield Discovery, as he flew the five-seater Helio Courier ski plane west toward the icefield in Kluane National Park and Reserve of Canada. We followed the Kaskawulsh Glacier’s 60-kilometre curving highway of surging ice toward the monumental Mount Logan, which, at almost 6,000 metres, is Canada’s highest peak.

“It’s a nice concentrated look at ice,” said Bradley, not meaning to understate the view, as we soared above a part of the world where, for as far as you can see, the compressed snow and ice is often a kilometre thick. Only the occasional sharp grey cliffs poke through the white landscape.

He pointed out what looked like a small glimmering scratch on a smooth patch of the icefield. “That’s the landing strip for a summer research station,” he said. For a second, I was disappointed that we weren’t going to touch down and try out the plane’s ski feet – then I remembered I wasn’t in snow gear.

As we looped back toward our departure point and began to descend, I had a remarkable view of the glacier’s edge as well as the icebergs that dot its terminal lake. My eyes followed the braids of  silty water that swirl across the mud flats of Slims River and eventually empty into Kluane Lake.

“Sometimes you can spot animal tracks on the sandbars,” said Bradley. “Grizzly bears and moose swim through the terminal lake to reach the surrounding soapberry bushes.” While we didn’t spot any animal tracks on my flight, I got a good look at some moving “dots”: Dall sheep high up on the rocky ridges overlooking the lake.

The boundary of Kluane National Park and Reserve of Canada runs right through Kathleen Lake.

TASTE: Kathleen Lake and Haines Junction, on the boundary of the Kluane Reserve
Before I explored the Kluane by foot, I devoured perhaps the most gourmet trail lunch I’ve ever had while sitting on the shore of Kathleen Lake on the park’s border. I can still remember the savoury flavours of the roasted-pork-tenderloin sandwich with kale-and-sunflower-seed pesto and pickled beets. It was carefully paired with locally grown crudités (yes, they were precious enough to warrant that label) and homemade hummus.

I washed it down with freshly pressed wild-blackcurrant juice before packing away my caramel-pecan brownie for later. It was all made by 34-year-old Kari Johnston and 29-year-old Courtney Quinn, the owners of the catering service 14 Acre Farm in the nearby village of Haines Junction. Johnston left Toronto behind in 2007; “I haven’t looked back,” she said.

Quinn arrived via Calgary in 2008. Both love their lifestyle: spending time outdoors and cooking with local ingredients. This “brown bag” meal was the ultimate example of the best kind of glamping you can experience – and a delicious showcase of what the Yukon has to offer.

One of the many mountain views near Haines Junction.

TOUCH: The Cottonwood Trail, Kluane Reserve
Flying over the reserve is truly spectacular, but to really experience the 22,000 square kilometres of Kluane up close, you need to put on hiking boots and feel the ground beneath you. There are no roads into the park, but Kathleen Lake is one of the best entry points. Near Lower Kathleen Lake, you’ll find The Cabin & Kluane Ecotours, a rustic summer property where the main log cabin is surrounded by wildflowers and, out back, there’s a raised vegetable garden that grows out of 10 bathtubs. (There are also five guest cabins in the forest.) It’s run by Wenda Lythgoe and Brent Liddle, a retired Parks Canada interpreter who knows the area like it’s his own backyard – which it is.

“It’s a teddy bear’s picnic through here, but the berry patch is now closed,” joked Liddle of the wild cranberry and Saskatoon-berry bushes along the Cottonwood Trail, as he led our small group up from the shore of Kathleen Lake to explore the first leg of the route. The area is frequented by black and grizzly bears, but “don’t let ‘bearanoia’ get you,” said Liddle.

Cottonwood, aspen and white-spruce trees tower over the lower part of the 84-kilometre looping trail (which takes at least four days to complete); above the treeline, texturally diverse alpine meadows take over. “I’ve seen everything from lilies to spotted orchids growing here,” he said, explaining that it’s all thanks to the influence of the Pacific Ocean. “Considering where we are, it’s a jungle here in comparison to, say, northern Manitoba – there are polar bears there.” As we climbed through some younger trees to take in a wide-reaching view of the lake, Liddle paused. “It’s huge country,” he said. “You’re just a speck out here.”

Voyageur canoes on the Yukon River.

LISTEN: Yukon River, Whitehorse.
Whoosh, whoosh, whoosh…. There were just four of us in an eight-metre voyageur canoe, but we moved down the Yukon River at a good clip as we paddled in unison. “That’s great synchronized canoeing,” called out our Kanoe People guide, Alex McDougall, a seventh-generation local Tlingit – an indigenous people whose name means “People of the Tides” – during our 18-kilometre journey from the river’s shore in Whitehorse to the Takhini River Bridge, where we would finish.

Between listening to McDougall’s stories about his family’s paddling adventures along this river and at Lake Laberge, we paused to listen to the occasional high-pitched whistle of a few eagles that seemed to be watching us from their shore perches. As I took in the sounds of nature, I wondered just where I might be drawn to next in this northern landscape.