The must luxurious travel destinations in Canada

Exploring the fancy side of Canada — complete with helicopters, treetop stargazing and, yes, beaches. 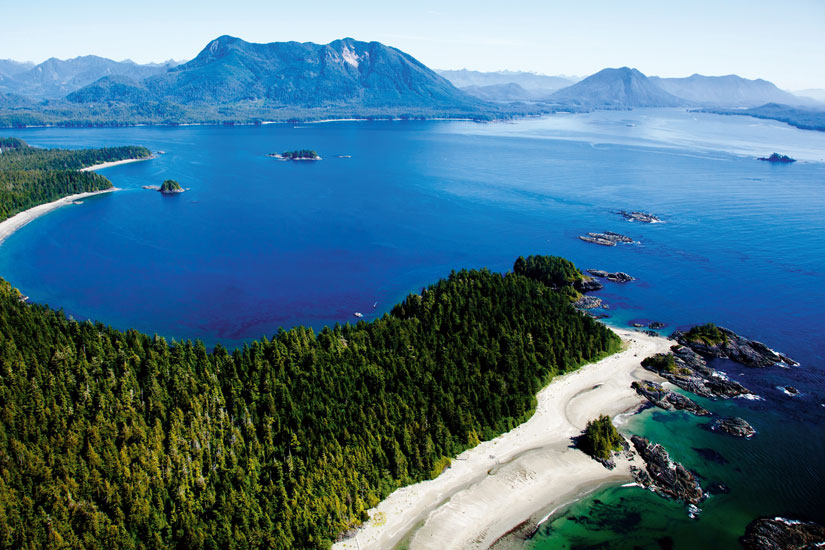 FOR THE… HIGH-MAINTENANCE CAMPER

Nature and luxury are not mutually exclusive — Clayoquot Wilderness Resort will leave you in no doubt of that. Set in one of Canada’s most spectacular locales, on the west coast of Vancouver Island, the property offers a standard of “camping” that’s superior to many five-star hotels. The spacious tents have en-suite bathrooms (with heated floors, no less), remote-controlled propane-fuelled “wood” stoves and comfy king beds, as well as antique dressers, oil lamps and candles to make you feel like an early explorer — albeit a pampered one. It’s a very far cry from the camping of your childhood, but you can still smell the forest and sea air and wake up to the sounds of crashing waves and birdsong. There are tons of nature-based activities too, like bear and whale watching, kayaking, rock climbing and even “cloud camping” — a day trip by helicopter to a topaz-blue mountaintop lake for the highest-altitude yoga, kayaking or stand-up paddle boarding you’ve ever done.

Yoga at dawn, a four-hour hike through the mountains, a circuit-training class and a massage. That’s the intense daily schedule at Mountain Trek in Nelson, B.C., where guests ranging from stressed-out CEOs to wealthy Type A’s come for a week-long boot-camp experience set in a beautiful Canadian landscape. Dubbed a “boutique fitness retreat,” this is an all-inclusive, highly immersive experience that includes portion-, sugar- and calorie-controlled gourmet food (kiss sweets, caffeine, booze and salt goodbye), challenging workouts and lifestyle-improvement seminars — all with the goal to make the numbers on the scale smaller and the mind more at rest. The main focus of activity is Nordic Fitness Trekking, which engages 90 percent of the body’s muscles and is a potent antidote to the damage done by a sedentary office-based lifestyle. You will come back invigorated, inspired and a size smaller — but you will work hard for it.

You know what’s just as nice as the hum of nature? The high-heels-on-pavement, clinking- of-wineglasses and alfresco-chatter cacophony of the city. Here are three places to stay:

Le Mount Stephen,  Montreal This recently opened  hotel in the city’s Golden Square  Mile is a hybrid of old and new:  Its entrance and restaurant have  taken over an impressive 1880s  mansion, which served as a gentlemen’s club for almost a century, and rooms and suites are housed in a modern annex hidden behind.

The Broadview Hotel,  Toronto We love a place  with a slightly shady past, and  the Broadview fits the bill: It  was home to Jilly’s, an iconic Toronto strip club, for over three  decades. Its new incarnation as a cool hotel adds to the rejuvenation of the city’s east end.

Fairmont Empress,  Victoria This historic hotel  has loomed over Victoria’s  harbour since 1908 (and is so  iconic that it has been designated a National Historic Site  of Canada), but its revamped Willow Stream spa is but a few weeks old. Pop in while you’re visiting the pretty capital for a Salish Sea Vitality treatment, which involves an impurity-removing scrub, a nourishing sea-kelp and seaweed wrap and a scalp massage.

Sleep under the stars in British Columbia or Down East. The cozy tree houses at Free Spirit Spheres on Vancouver Island give a new definition to “love nest.” Suspended five metres above the ground in dense cedar forest, these orbs are small (around three metres across) but perfectly formed, their clever design somehow accommodating a table, bed and kitchenette. The nighttime sounds can be calming or eerie, depending on your disposition, but either way the sphere’s gentle sway will lull you to sleep. And don’t mind the birds peering in—they know what’s what.

The Stargazer Domes at Ridgeback Lodge, about an hour’s drive from Saint John, N.B., have transparent ceilings, so you can impress your other half with your knowledge of Orion and‎ Cassiopeia et al. The tentlike structures sit on a raised deck and are tucked away in the woods for plenty of privacy—which you’ll need when you take a dip in the outdoor Japanese hot tub.

Here’s something you’d be forgiven for not knowing: Nova Scotia is the next big wine region in Canada. The province has quietly been putting itself on the map as a producer of crisp, aromatic, off-dry whites and bubblies whose characters have drawn comparisons with Sancerre and champagne, two undisputed gems in France’s wine crown. Do a winery tour in the Gaspereau and Annapolis valleys, and be sure to stop in at Benjamin Bridge, one of the more celebrated local producers. Once you’ve made some purchases for your cellar, make the three-hour journey down to Trout Point Lodge — it’s a bit of a trek, but it’s worth it. The remote property is in the Tobeatic Wilderness, a lake- and river-filled protected area near the southern tip of the province. Accommodating a maximum of 30 guests, this beautiful lodge was constructed from logs hewn on-site and is made super-inviting with handmade rustic furniture, flattering lighting and roaring fires. But before you uncork some of that wine and get into the wood-fired riverside hot tub (definition of “perfect Saturday night,” no?), avail yourself of some of the lodge’s “experiences”: Expand your culinary repertoire with a lobster-cooking class, or boost your immune system with “forest bathing,” a practice that originated in Japan and involves simply being among trees (fully clothed) and attuning your senses to all the sights, sounds and smells.

For many of us, true relaxation means not having to worry about a single thing. A stay at Sonora Resort, on Sonora Island, part of an archipelago off the coast of B.C., includes all meals, drinks (yes, alcohol too — except the premium stuff) and most amenities, like the outdoor heated pool and a movie theatre. Food is as fresh and as local as possible — which, given the location, is heaven for seafood lovers. Options for extras are kind of incredible, from river rafting to helicopter glacier tours. The property is in a spectacular setting at the ocean’s edge—so plenty of fodder for creating Insta envy—but when you tire of all that pristine wilderness, retreat to the Island Currents spa for an Elixir des Glaciers facial, an anti-aging treatment care of luxe Swiss brand Valmont, or just a good long soak in the hydrotherapy tub, which has 252 jets to pummel the stress out of you.