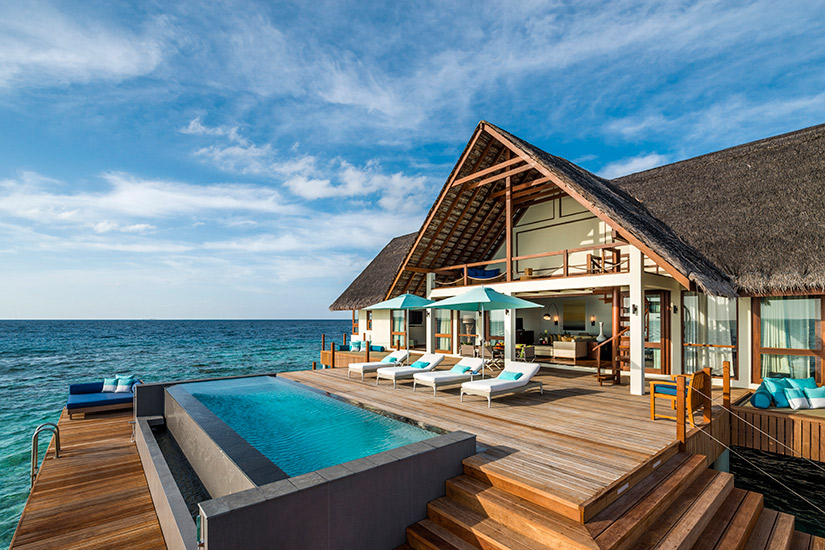 You might have to pinch your arm every so often to remind yourself that you’re not on the set of a movie. “It’s a wonderful location coupled with luxurious Italian style,” says Giovanni Battista Sparacio, ELLE Spose Italy’s features editor. VIPs are de rigueur here, and the quality of the service means you won’t doubt that for a moment. Have lunch beside the hotel’s enormous swimming pool, then, when you’re ready to venture out into Venice, step onto the hotel’s private launch, and in five minutes you’ll be in the thick of things. Later, over dinner at the hotel’s sumptuous Michelin-starred restaurant, you might think things can’t get any better. But then they do, as you contemplate the view of the lagoon from your room’s balcony and your private butler ensures you have everything you need. La vita e bella.

Located on the island of Gotland, this former gravel-quarry-turned-hotel has a unique and memorable approach to hospitality as well as striking architecture. “It’s a minimalistic and cozy atmosphere in a breathtaking and exotic environment by the sea,” says Lovisa Lundstrom, editor at Swedish ELLE. Try the Hermit Cabin, accessible via a 20-minute bike ride, if simplicity and disconnecting are what you’re seeking. (There’s no electricity and no running water in this particular cabin.) And if you’d prefer to stay plugged in (and have a shower in your room), you’ll love their sumptuous suites with plush materials in lovely grey tones that counterbalance the concrete structures. The hotel restaurant offers delicious local cuisine made from fresh ingredients picked right at the hotel’s farm. A true experience.

An hour’s drive from Reykjavik and not far from a UNESCO World Heritage national park, Ion Luxury Adventure Hotel is otherworldly. Nestled at the base of a dormant volcano surrounded by mountains and lava fields, the hotel prides itself on sustainability at every level, from organic bedding and water-saving shower systems to locally sourced food. Even the tables and chairs are made from recycled materials. And did we mention the view? “It’s superb,” says Maiko Hamano, ELLE Mariage Japan’s editor-in-chief. Relax in the hot-spring-heated outdoor pool or admire the aurora borealis from the aptly named Northern Lights Bar. Whether you’re getting pampered at the hotel’s Lava Spa or discovering the “land of fire and ice,” you’ll forget that you’re still on planet Earth.

On the island of Sylt, health and wellness are priorities, even when it comes to the land — half of it is covered by either conservation zones or nature reserves. In the middle of one of these nature reserves on the eastern tip of the island sits the quaint yet luxurious Severin’s hotel: “A quiet little hideaway on Germany’s most popular island,” says Franziska Frosch, ELLE Germany’s deputy editor-in-chief. With a steam room, a Finnish spa and an incredible restaurant serving up delicious regional dishes, it’s the perfect place to disconnect from a busy lifestyle and reconnect with oneself, all in a charmingly chic yet cosy atmosphere. Take your tea and cake on the terrace of the hotel as you enjoy the view of the Wadden Sea, or grab a bite at one of the lovely beachside bistros or Michelin-starred restaurants in the area. This little island is full of surprises…

Each suite at Villa TreVille is brimming with history from the days of its former owner, famed opera and film director Franco Zeffirelli. Legends such as Tennessee Williams, Laurence Olivier, Richard Burton and Elizabeth Taylor all slept here. The hotel, set on limestone cliffs overlooking Positano with views of the Tyrrhenian Sea, is the absolute epitome of romantic Amalfi Coast living. “Villa TreVille has everything – charm, beauty, history and romance,” says Justine Cullen, editor-in-chief of ELLE Australia. “It’s the perfect place for newlyweds to hole up for a week of indulgence.” We agree – it’s perfection, from the cuisine (local, fresh ingredients) to the impeccable service (long-time employees will make you feel right at home). Staying amid such cultured history, you’ll be filled with inspiration and…amore!

Set on limestone cliffs on Bali’s southern coast, Anantara Uluwatu is “as close to Eden as you can get,” according to ELLE South Africa’s editor-in-chief, Emilie Gambade. For your temporary lodgings, opt for a suite (they all have sea views), a duplex penthouse with floor-to-ceiling windows or a villa with its own private pool. It’s a surfer’s paradise here, with a variety of beaches nearby to suit your surfing, swimming or sunbathing needs. This perfect romantic escape provides stunning sunsets – best seen from the hotel’s rooftop restaurant, which boasts 360-degree views of the Indian Ocean – mesmerizing treatments at the hotel spa and adventures like river rafting or even an elephant safari. There’s a reason they call it the Island of the Gods, and by the end of your trip, you’ll be able to say why!

At the Four Seasons Resort Langkawi in the Andaman Sea, you’ll be able to live out any Indiana Jones fantasies you’ve been harbouring while relaxing in complete luxury. Venture out and discover the lush island, complete with rainforests, mangroves and stunning beaches, and you can even pop over to the uninhabited surrounding islands of this UNESCO Global Geopark. There will be major bang for your honeymoon buck here. And who better than Kate Guest, ELLE Malaysia’s editor-in-chief, to fill us in: “Romantic fireside dinners on the beach, a swinging hammock built for two to watch the sunset and staff who know exactly when your drink needs refilling and when you want to be left alone.” You’ll feel like you’re in your own little kingdom.

If you’ve ever dreamed of vacationing in Japan in your own private traditional pavilion, relaxing in an elegantly calm atmosphere near gorgeous beaches, Hoshinoya Taketomi Island is the place. Take it from Maiko Hamano, editor-in-chief of ELLE Marriage Japan: “It’s an incredible destination for experiencing a luxurious stay.” The resort offers local Okinawan dishes influenced by French cuisine and spa treatments infused with local ingredients, such as butterfly ginger, seaweed and hibiscus. While it takes almost nine hours to travel to the island from Tokyo (domestic flight, ferry and car, in that order), it is certainly worth the wonderful local adventure.

Zen principles abound at this haven of peace and sophistication, perched above the historic freshwater Sun Moon Lake. But don’t let us convince you – take it from Japan’s Crown Prince Hirohito, who appointed The Lalu as his official residence in the 1920s. And, of course, team ELLE Taiwan have a particular fondness for this retreat. From every angle of the hotel, you’ll be graced by its spectacular yet calming views of the mountains and lakes. It’s all about tradition and modernity — whether you’re sipping tea or slipping into the spa, you’ll be immersed in simplicity and thoughtfulness. In a word? Bliss.

If you have a hard time choosing between sand dunes, freshwater lagoons and gorgeous beaches, your solution may be Banyan Tree Mayakoba. The stunning exclusive gated community is home to canals (take a little boat from your private villa through the resort), Caribbean beaches (rent a bike for a five-minute ride to the coast on nature trails) and a private golf course (if you’re in the mood to tee up). At the spa, be sure to request “the Rainforest” for a unique hydrothermal therapeutic experience. Once you’ve worked up an appetite, head back to your villa and take a dip in the pool while your private barbecue is prepared right in front of you. And, if you have the energy, cap off the night with a tequila tasting to truly savour the flavours of the Riviera Maya.

“The heaven-on-earth cliché becomes real here,” says Serli Gazer, ELLE Turkey’s fashion news editor. The striking Mount Otemanu overlooks the Four Seasons Bora Bora, which is situated in a turquoise-blue lagoon with a coral reef – its over-the-water bungalows and beachfront villas make it one of the most unforgettable views (you may have already dreamt of it). But if you need extra convincing, that shouldn’t be difficult: There’s the spa that uses local natural ingredients, the exquisite local dining (in your bungalow, on the beach…) and a plethora of activities to keep you moving, deeply relaxed or in harmony with nature.

Emirates One & Only Wolgan Valley

Nature and luxury join forces at this hotel, which has 40 private villas on 7,000 acres. It’s all about “complete seclusion, perfect for newlyweds looking to escape,” says Justine Cullen, editor-in-chief of ELLE Australia. For an unforgettable moment, ride bikes to a gorgeous lookout point and feast on a private picnic lunch delivered to you in a wicker basket. Take in the view and watch the kangaroos as you dine on locally sourced cuisine. Restore yourself in the sanctuary-like spa, capping off the day with a glass of wine as you relax in front of the double-sided fireplace.