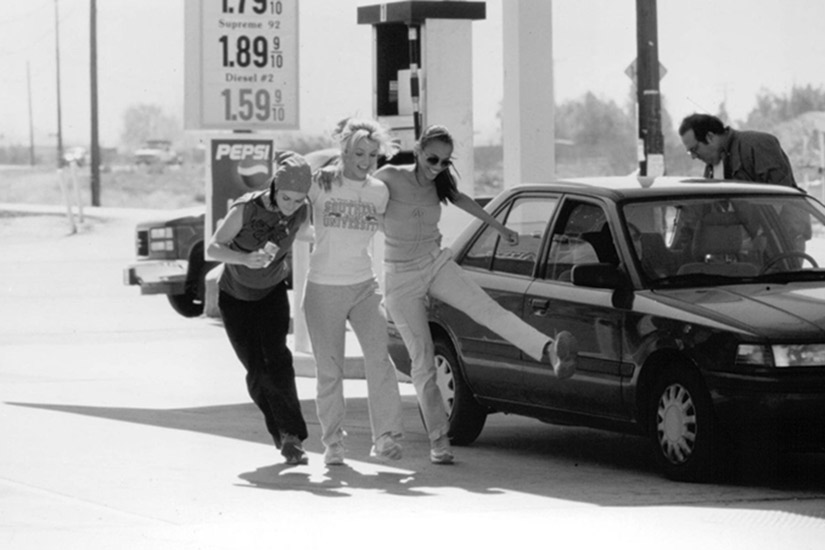 Walk the line: Mississauga to Tofino

The summer I was 11 years old, my family hit the road for a cross-Canada adventure. I had not yet grown to love camping, so I wasn’t particularly thrilled about this trip. Even less thrilling was being stuck in the middle seat between my two older brothers, who when bored entertained themselves by tormenting me. It was pre-cellphones, pre-Internet and pre-in-car-entertainment, so boredom was pretty much our constant state—broken up by their bad behaviour and me periodically asking “Are we there yet?” A trip highlight was when my parents finally made good on their threat to make the boys walk as punishment and we dropped them off on the side of the Trans-Canada Highway and drove away. About 500 metres later, we pulled over and waited for them to catch up while my mom panicked that it had been a bad idea and something might happen to them. (They were fine. And still behaved badly afterwards.) Sibling torture aside, I ended up loving the trip. Making a few stops en route, we drove all the way to Tofino, where we camped on the beach and I played with driftwood and strange-looking seaweed, beyond delighted to be out of the car. We were finally there.
Road-trip tip: Bring a canoe. It’s a PITA to get it on and off the car every day but worth it to be able to glide onto whatever body of water you happen to be near. – Ciara Rickard, Production Editor

The whiteout: Lake Louise to the Okanagan Valley

After spending Christmas in Banff—dogsledding, cross-country skiing, staying at Chateau Lake Louise and generally having the most Canadian holiday my new-immigrant family could come up with—we set off in our rental car toward the Okanagan Valley. It was just our second Canadian winter since moving from South Africa—and our first mountain-highway-in-winter experience. I remember that drive through the snowy night as utterly magical—we were the only car on the road, following a single set of tire tracks, and the only other living creature we encountered was a lone wolf on the side of the road. I vaguely remember overhearing on the radio that the road behind us was closed as avalanche after avalanche fell, but I was mostly too busy jerry-rigging a string of licorice from ceiling hook to ceiling hook in the backseat with my brothers to be overly concerned. In hindsight, that must have been some majorly white-knuckle driving on my dad’s part, but for Grade 3 me, it was just a blissfully ignorant trip through a winter wonderland.
Road-trip tip: Parents, never let your kids see you sweat the sheer drops off the side of the highway. – Sarah Laing, Culture Editor

Get me to the church on time: Toronto to Washington, D.C.

Six years ago, my brother and I decided to drive to my sister’s wedding. We planned it so that we would arrive right on time. The route took us through beautiful ravines, and we chilled out, listening to cheesy music along the way. We knew we’d be cutting it close, but we had good directions—so we thought. We took the last exit to the church and then kept driving and driving—as the clock on the dashboard kept creeping forward. When it was past the time my sister was supposed to be walking down the aisle, we finally stopped and called friends who were at the wedding; they explained that there was a second exit we were supposed to take. Somehow, everyone at the wedding seemed to know this—except for us. We decided that we’d be too late for the church service, so, on our friends’ advice, we headed to the hotel. But once we checked in, my mother called with the ultimate “Where are you?” query—not only had we missed the wedding, we were now missing the family pictures. We did make it to the reception, and we took lots of (sheepish) photos there. (I’m the one on the left.) But I will never forget the look on my mom’s face when we walked in—she was so mad at us.
Road-trip tip: Give yourself more than the exact number of hours you need to get to the church. Or, just fly! – Brian Fleming, Associate Art Director

The night bus: Toronto to Vancouver

One summer, when I was eight and my brother was five, my family took a Greyhound bus from Toronto to Vancouver and back. Money was tight, and this was a rare—and exciting—vacation. When my brother and I weren’t fighting over who got the better seat by the window, we saw some great scenes of Canadiana: the outline of the Sleeping Giant in the foggy air of Thunder Bay; the giant steel Canada goose monument in Wawa; the endless fields of wheat in Alberta. We ate really greasy French fries in the Winnipeg bus station and chased prairie dogs at a stop in Saskatchewan. On the night we entered British Columbia, a giant owl crashed into the bus window, leaving a crack along the side of it. To celebrate our arrival in Vancouver, we had dinner at a fancy hotel—I can’t remember which one, but I was dazzled by the sparkling silverware and well-dressed waiters. My dad ordered carrot soup. He blew on it to cool it off before tasting it and then laughed out loud in surprise. He passed the bowl to my mom, who did the same. None of us had ever heard of chilled soup before. I remember him laughing until he cried. “Cold soup!” my dad kept saying as he wiped his eyes with the stiff white napkins. Who knew that this was how they ate their soup in Vancouver?

Road-trip tip: Let someone else do the driving. You can sleep, take in all the scenery and cover more distance in a short amount of time. But I’d recommend the train or a very well-appointed town car. – Vanessa Craft, Beauty Director

There and back again: Toronto to Montreal

I’ve made the trip between Toronto and Montreal enough times that I don’t need to open the Waze app to get there. Four years at McGill University, plus appearances post-graduation at music festivals, brings my round-trip total to the double digits. Going by car isn’t the fastest way to get there, but I love the predictability of the drive: There is a requisite stop in Kingston, the halfway point, to get gas and food. (Everyone will decide on Wendy’s.) Gas-station candy will always be purchased and consumed with abandon. And then there’s the excitement of potential road-trip companions. If you grab a ride with friends of friends, you may even arrive with a date. I have.
Road-trip tip: A working aux cord and phone chargers are keys to the happiness of all vehicle occupants. There is no awkward moment or sleepy vibe that Nicki Minaj played at full volume can’t turn around.
– Victoria DiPlacido, Associate Beauty Editor