Tales from an adventuress

Carol Devine on the push and pull of an intrepid life. 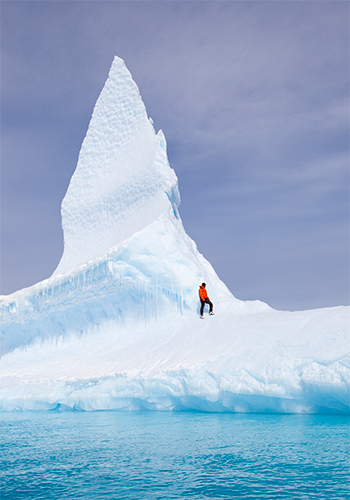 Adventures stretch us and make us grow — especially when things go awry. When I led a group of eco volunteers to Antarctica, our ship was seized by customs agents in Argentina. It was stressful, but it was also an opportunity to vastly improve my negotiation skills. When we eventually set sail, anticipation for the journey ahead quickly made our disappointment about the delay float away.

Since I’m an explorer, a humanitarian and an activist, adventure is my way of being. I define it as trying new things — from glacier hiking to the meditation class I took despite my dread of sitting still. It’s asking questions and taking calculated risks. It’s mixing pleasure with discomfort to enrich one’s life.

My mom is one of my adventure role models. She left Ontario to teach in Japan in the 1960s, when few Westerners lived there. She escaped partly to heal her heart. When she returned to Canada two years later, the beloved ex-boyfriend who had broken her heart asked her to marry him. It was my dad. She taught me that adventuring can have unexpected effects.

Growing up, I was inspired by stories of women resistance fighters in the Second World War and early explorers, particularly 18th-century botanist Jeanne Baret, who posed as a male sailor to become the first woman in the Antarctic territories and to circumnavigate the globe, and Belgian — French explorer Alexandra David-Néel, who dressed as a beggar to travel into Tibet in 1924, when it was forbidden.

Today, female explorers can do anything men can do — although we sometimes still need to push gender barriers. (And while we can wear anything we want when adventuring, we still must consider both the art and science of dressing appropriately for different cultures and climates.)

Neuroscience shows that leaving our comfort zone nourishes our brains and re­lationships — and anchors us for our next visit to our own outer limits. Switching a route to work is beneficial, as is bumping up against different people and ideas. According to researchers, our brain connec­ tions need to be stretched to promote con­tinued learning, especially as we age.

Fortunately, we have an innate ten­dency to seek new experiences. According to a University College London study, there might even be an evolutionary advantage to sampling the unknown. The study found that the brain’s ventral striatum, a reward centre, activates when we choose unfamil­iar options or take a chance and likely trig­gers a dopamine release.

I get a certain feeling — an inner pang, or butterflies — when an opportunity comes up that simultaneously frightens and excites me. Some people expand their comfort zones more easily than others, but studies show that trekking to the edge of our own experience gives us confidence and perspective.

For me, the best adventures mix contri­bution and collaboration. I took a job as a field worker (and later as program director) for Médecins Sans Frontières because I be­lieve everyone should have medical care. Before I left on my mission to Rwanda in 1996, I sought advice for managing diffi­cult situations. During a pre­-departure course, a doctor who was heading to Bosnia assured me that the odds we’d both return home safely were excellent. I still value her wisdom on how to balance fear and fearlessness.

We should embrace op­portunities like this by preparing, being alert and mitigating risks instead of clinging to the “sameness” that can deter us from discovering our unique selves. Rwanda shaped me. I witnessed the impact of heinous crimes against humanity but also learned about courage and resilience.

Not all expeditions need to be quite this extreme or far­flung — there’s a huge range of “voluntourism” opportunities out there that can provide a smaller dose of pur­poseful adventures. I’m thrilled about he growing trend of “microadventuring,” which British adventurer and author Alastair Humphreys is popularizing as a way to encourage people to get outside and into the wild — however you define that.

He describes a microadventure as “close to home, cheap, simple, short and yet very effective.” These free or low-cost outings could include going on an urban hike in your city or to a place near your home that you’ve never been. In geographer Alastair Bonnett’s book Unruly Places: Lost Spaces, Secret Cities and Other Inscrutable Geographies, he writes about braving several lanes of traffic to explore the isolated patch of grass in a traffic island in Newcastle, England, that he passes during his daily commute.

I made adventuring affordable by making it my work — I’ve co-written a book about my Antarctic cleanup trip (see “Food: Try an Edible Expedition”), and I’m now a strategic adviser for the Museum of AIDS in Africa.

When I had kids, my wanderlust didn’t disappear. While I wasn’t up for trips to conflict zones, I started doing research, writing and exploring at closer range, as well as some short-term jobs in Africa and South America. I still yearned to try new things and meet new people.

So, with a friend, I did a fundraising “dare” to try nine new sports. This introduced me to “subcultures” in my own city, such as speed skating and acrobatics using aerial silks. I learned the hard way — and with great humility — that I’m better at archery than aerials. And I discovered you can take archery lessons in a beautiful historic barn at Casa Loma in Toronto. Who knew?

QUIZ: What kind of adventurer are you?

I also believe that nature is a tonic. We are living on a fragile planet in an age of disequilibrium. Numerous studies have found that there are mental and physical health benefits to being outside. Out­ door exploration helps battle what American writer Richard Louv calls “nature­deficit disorder,” a result of our increasingly indoor, screen­filled lives. Accumulating more memories than things is a beautiful quest for us individually and for humanity.

I like the adage that you’ll be more disappointed by what you didn’t do than what you did. I regret turning down the opportunity to work on women’s health in Afghanistan in my 20s. I regret hanging on to one tough humanitarian job so long that it nearly burned me out.

What don’t I regret? Saying no sometimes; it leaves space to open another door. Like skateboarding, which I started at 42. I adore it — even though, when I was out with my son one time, I broke my ankle. It was painful, but I can laugh about it now.

Adventuring is a muscle I must exercise throughout life. My next journey is to the Arctic Ocean. I’m keen to know about northern peoples, cultures and wisdom. In August 2015, I’m joining civilians cleaning garbage from the shores of Spitsbergen, a Norwegian island. Although one­ off stewardship efforts like this can’t change the world, they have a ripple effect. Adventures promise know­ ledge, friendships and discovery inside and outside of yourself.

Take on microadventures
Check out Alastair Humphreys’ Credit Crunch Expeditions and A Year of Microadventure, which include monthly outing recommendations (alastairhumphreys.com). Or, sign up for a class like those at the Toronto-based Pine Project, which offers outdoor courses in everything from wilderness skills to mentoring.

Find meaning
Search travel and volunteer opportunities at home or abroad, but choose carefully — start your search through organizations like CharityVillage and Voluntary Service Overseas. Or, join me in the Arctic to clean the shores of Spitsbergen.

Overcome fear
Prepare. Research your adventure and get safety tips, travel insurance, vaccinations and, depending on where you’re going, evacuation insurance. Start your research through the World Health Organization’s international travel and health guide and companies like International SOS.

TAKE THE QUIZ AND THEN EXPLORE YOUR ADVENTURE STYLE: