Strange and beautiful adventures in the Galapagos 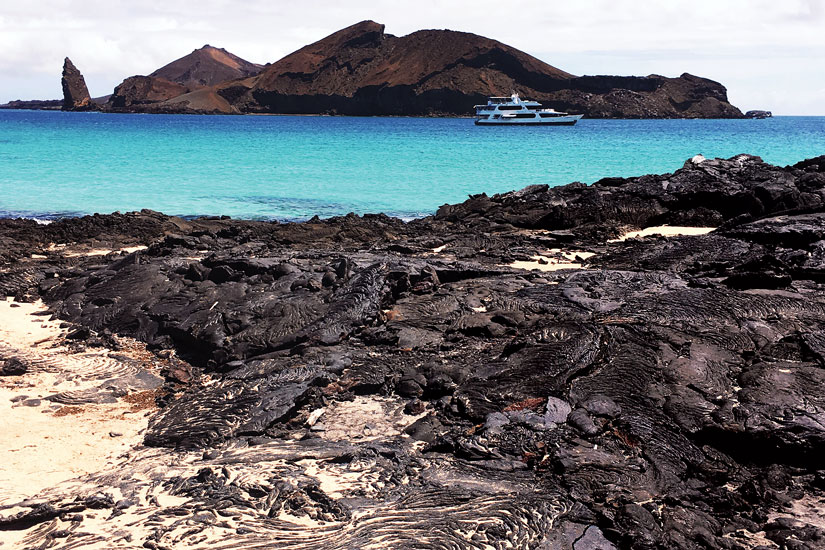 The van came to an abrupt stop less than a kilometre from my hotel on Santa Cruz Island due to a very slow-moving roadblock: a 200-pound Galapagos tortoise. More concerned with munching on the bright-green blades of grass dangling from its mouth than with the approaching vehicle, it didn’t make any effort to move. Eventually, two people had to carefully carry the imposing creature off to the side so we could pass. This was a fitting start to my five-day visit to the Galapagos since the archipelago of 13 major islands clustered 1,000 kilometres off the coast of Ecuador is named after the giant tortoises—galápagos, in Spanish.

The islands, where there are no natural predators, are famous for wildlife that is not generally spooked by humans, so my close encounters came swiftly: On my first yacht excursion, to North Seymour Island, I only took a few steps onto the shore before spotting a blue-footed booby with its chick as well as male frigate birds with their bright-red balloon-like necks on display. Another day, before we had even dropped anchor, we came across two adorably tiny Galapagos penguins near Bartolomé Island. It’s strange — almost alternate-reality-like — how quickly you can adapt to the notion that birds would rather ignore you than try to peck out your eyes when you get close to their babies.

Of course, I did arrive here ready to be captivated by the wildlife and the surreal lava-formed landscapes — the Galapagos is a bucket-list trip for good reason. But I had no idea I would also become enthralled with some of the islands’ human history. While the Galapagos has long been an Eden for animals, that has not been the case for humans. In 1535, the Spanish discovered the islands by accident after drifting offcourse. They found the place inhospitable — some died of thirst before they found fresh water. For years, whalers and pirates were the only intermittent human visitors. The first “resident” of the islands was a marooned Irishman in 1807. But in 1929, according to my guide Paulina Aguirre, a handful of German settlers came to Floreana Island with the express purpose of creating their own Eden. It did not go well—it was basically Gilligan’s Island gone very, very bad.

The convoluted tale starts with the arrival of a German doctor/philosopher and his young lover, who are then followed by another (unwelcome) German couple and a self-proclaimed baroness with two male lovers. Fast-forward five years — through several alleged affairs, two disappearances/likely murders, a drought, a suspicious food-poisoning death and a shipwreck with two mummified bodies — and you end up with absolutely no certainty about what really happened to any of them.

The small group I was travelling with was so taken with the you-can’t-make-this-stuff-up history that we watched a documentary about it — The Galapagos Affair: Satan Came to Eden (complete with voice-overs by Cate Blanchett and Diane Kruger) — and it dominated our dinner conversations back at our hotel. It became our very own Galapagos true-crime tale worthy of in-depth speculation à la the Serial podcast or Netflix’s Making a Murderer.

Today, more than half of the Galapagos’ 30,000 residents live on Santa Cruz Island; to curb development, the number of automobiles is limited. (Ninety-seven percent of all land in the Galapagos is protected as a national park.) The one main road (with bike paths) is flanked by fruit and cattle farms at higher elevations. On the eastern side of the island, perched along the ridge of a now-dormant volcano, is the 14-room Pikaia Lodge, the islands’ first luxe eco-hotel, where I stayed. After my long days out on the property’s Pikaia I yacht, it was lovely to step back onto solid ground and then wake up to a misty-green view of the surrounding giant-tortoise reserve. Named after Pikaia gracilens, the first creature that evolved into a vertebrate, the property is full of evolutionary touches, like a copy of Darwin’s On the Origin of Species in my nightstand and a wall sculpture of Darwin’s finches in the Evolution restaurant.

A room with a view at Pikaia Lodge.

Earlier in the trip, on the grounds of the Charles Darwin Research Station, as if on cue, two of these finches appeared within seconds of each other — a medium ground finch and a cactus finch. Darwin didn’t recognize the significance of the finches he had collected from the various islands during his 1835 voyage until years later when their distinctive beaks became a key example in his theory of evolution. Seeing the finches myself made me think of British evolutionary biologists Peter and Rosemary Grant, who’ve been studying finches on the Galapagos islet Daphne Major since 1973. Their groundbreaking work, published in their 2014 book 40 Years of Evolution, found that the Daphne Major birds are evolving much quicker than Darwin had ever suspected — in some cases from year to year. It all reminded me that there is still much here to be explored.

On my flight back to the mainland, my curiosity about the Floreana saga was again piqued. I couldn’t believe my eyes when none other than Tui De Roy, one of the locals interviewed in the The Galapagos Affair documentary, sat across the aisle from me. Her parents came to the Galapagos from Belgium in the 1950s and were early settlers on Santa Cruz Island. I was dying to ask her what kind of Floreana rumours she’d heard growing up. But she was so soft-spoken and gracious that I couldn’t bring myself to sully the conversation with the “Who do you think did it?” question — plus, I already knew that no one really knows that answer. Instead, we talked about what it was like for her to grow up in such a beautiful but isolated place. “My best friends were the animals and birds,” recalled De Roy, now a wildlife photographer based in Takaka, New Zealand. Her kind demeanour and focus on nature quickly brought my focus back to the real reason that I, like so many others, am attracted to the Galapagos.

To get to the Galapagos, you need to fly through Quito or Guayaquil, both in Ecuador — choose the much more picturesque Quito. Stay at the Casa Gangotena boutique hotel, a restored mansion that overlooks Quito’s Plaza de San Francisco, the city’s historic centre. The rooftop patio offers a remarkable view of dozens of church steeples.