Somewhere in time: Stay at one of Ireland's most luxurious manor houses

Ciara Rickard takes a trip back to the romantic era with a stay at an Irish mansion that has family ties. 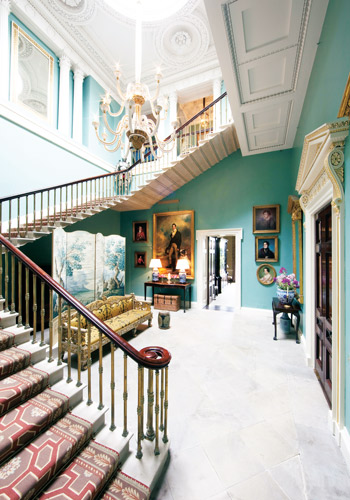 The feather in my hair is a foot high and the sleeves on my corseted gown are voluminous enough to hold a litter of kitens, yet I’ve quite forgotten about feeling ridiculous. In fact, my outfit feels more appropriate in this 19th-century setting than the leopard-print skit and oversized knits in my suitcase.

It’s dinnertime at Ballyfin Demesne, Ireland’s best-preserved Regency mansion and now a luxe hotel, and I’ve raided the period-costume closet along with the other guests. I might look like Keri Russell in Austenland, but this is not a Pride and Prejudice theme park. I have not, thankfully, been paired up with an actor beau, and dress- up hour is optional – although it is a lot of fun. “We want guests here to experience life as it might have been 100 years ago if you came to stay with a grand family,” says Jim Reynolds, the hotel’s managing director.

That feeling begins at the property’s gates. At the end of a long driveway, in a pretty wooded setting, the enormous stately and elegant house looms up suddenly. Smart-looking staff are lined up along the front steps to greet me, as they do all guests. (“Just like Downton Abbey!” I think.) After receiving a warm welcome, I’m ushered into a beautiful hall lit with a roaring fire. Tea is offered, and it’s quickly delivered with buttery-soft cookies.

Built in the 1820s, Ballyfin, in County Laois, started life as home to Sir Charles and Lady Caroline Coote, one of many wealthy English families who lived in Ireland in that era. They owned much of the local area and collected rent from tenants – natives weren’t allowed to own land at that time. But with the arrival of Irish independence in 1921, the Cootes, like many resident Brits, returned to England. The property was then used as a school for boys until it was bought in 2002 by American businessman Fred Krehbiel and his Irish wife, Kay. Together, they pains- takingly restored the house over the course of nine years.

Towering ceilings, enormous fireplaces, faux-marble columns (they used faux because it was more expensive than real marble when the house was built—and that meant it was better) and antique furniture truly make me feel like I’m in another era. The 15 guest rooms are lavish and individually decorated: Canopy beds, beautiful fabrics, deep bathtubs and massive windows with stunning views are all Lady Mary-worthy.

Many touches, from old leather-bound books in the library to intricate replica rugs, lend authenticity – I’m half expecting to see Lady Coote sashay into the drawing-room as I relax with a glass of wine before dinner. Opulence was the order of the day back then, and the Cootes could afford it: “Anything they wanted, they could have – money was no object whatsoever,” says Declan, one of the wonderful butlers.

Among the family’s prized acquisitions is a stunning mosaic floor that originally came from a 2,000-year-old Roman villa; two centuries after being transplanted to Ballyfin’s entry hall, the tiles are still in perfect condition and give the room an exotic air. Less exotic, but still charming, are neat rows of wellington boots, large umbrellas and raincoats laid out for guests (because this is Ireland – it will rain), and I avail myself of these when I head out to enjoy some of the outdoor pursuits on offer – activities suited to the aristocratic lifestyle of which I’m now having a taste.

Although I’ve never shot a gun in my life, I spend an enjoyable hour trying clay-pigeon shooting; after some coaching from the capable and very patient head butler, Lionel, I eventually manage a satisfying hit on one of my targets, square in its centre. Next is a gourmet picnic lunch – delivered and set out by staff alongside a wood- burning stove – in a rustic cabin with sweeping views of the property. And when the sun breaks through the rain clouds in the afternoon, I seize the opportunity to go horseback riding around the property’s lake and through the bluebell-carpeted woods.

But it’s not just the chance to feel like Elizabeth Bennet (after she marries Mr. Darcy, of course) that has me excited to be here. I have a connection to the area: My mother is from a town only 20 kilometres away from Ballyfin, and her father grew up even closer to the estate in the late 1800s. (“Your grandfather would have paid rent to the Cootes, so you have a stake in the house,” jokes Reynolds.) My mom immigrated to Canada when she was in her late 20s; Toronto ended up being the last stop on her pursuit-of-adventure tour (through a nursing career that took her to various cities in Europe, North Africa and North America) after she met my dad. Most of her family are still in Ireland, so we have made many family trips over the years – I have happy memories of playing with feral kittens at my uncle’s farm by day and listening to ghost stories by night – but I had never heard of this grand house, just a short drive away.

My godfather, Des, was a boarding student at Ballyfin when he was a boy in the late 1960s – and he describes it as a world away from the comforts now enjoyed here. “We ate the same meal five nights a week: ground beef in gravy and potatoes,” he tells me. “And sometimes it got so cold, the pipes would freeze. Life there was tough – but you came out prepared for anything.”

Today, Ballyfin is cozy, despite its vastness, and the food is so good it makes me rethink things I thought I didn’t like. (As it turns out, monkfish is delicious.) Chef Ryan Murphy is devoted to using all of the hotel garden’s bounty, which includes everything from carrots and onions to apples and kale. From afternoon tea by the fire to pre-dinner bubbles with a harpist playing softly in the background, every moment feels quite perfect.

I can’t help but think of the stark contrast between my experience here and the humble life my ancestors lived as local farmers when the Cootes owned the area. What would my grandfather think if he knew that, only two generations later, a member of his family would be a pampered guest at his landlords’ grand estate? Ireland has come a long way since then and has been reclaimed by its native people. But the legacy of the Anglo-Irish is places like Ballyfin, bringing people together in a celebration of history and luxury – surely a silver lining.

READ MORE:
10 of the best investment luggage sets
A winter weekend in Whistler
An insider’s guide to Dubai