The island’s unmatched vistas are a sci-fi cinematographer’s ultimate reality. 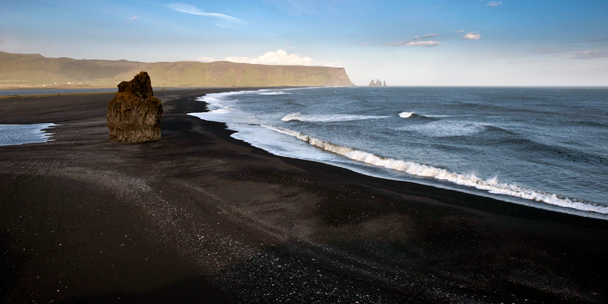 “It’s otherworldly”: That’s how Árni Páll Hansson, a producer and co-founder of Truenorth, Iceland’s go-to production house, described the scenery as he showed me around the island’s sites — glaciers, waterfalls and frozen lakes accessed via a customized “monster truck” — that have been immortalized on film. He knows the movie land- scape well: His company has helped the earth (and ice) double as out-of-this-world (and alternate-world) loca- tions in sci-fi extravaganzas like Prometheus, Oblivion, Thor: The Dark World, Transformers 4 and Noah, to name but a few.

Janet Graham Borba, an exec at HBO Films, oversees Game of Thrones, which filmed parts of its second, third and fourth seasons in Iceland. She has called the land “shatteringly beautiful, barren and brutal.” I couldn’t put it any better. Many of my set-jetting stops — the Skógafoss waterfall (Thor: The Dark World, The Secret Life of Walter Mitty), for example — have already racked up multiple onscreen credits. (Even the monster truck — a super-suped-up six-wheel-drive Ford van — that took us to the base of volcano-ash-covered glaciers has made an appearance on 60 Minutes.) But there is so much insanely breathtaking scenery on offer that it’s hard to believe there’s ever a need to film the same place twice.

With a few minutes to spare after checking out yet another stellar waterfall (Seljalandsfoss—as seen on The Amazing Race 6 and which you can walk behind), I wan- dered a few hundred metres north and came across another one—this one tucked away behind towering grassy cliffs. As I hopped from stone to stone through the nar- row opening in the bluff where the Gljúfurá River trickled out, I entered an alternate-reality version of the winding, craggy passage leading to Petra (as featured in Indiana Jones and the Last Crusade) — but instead of being carved out of pink granite and blanketed by sand, the waterfall was protected by layers of crooked walls covered in thick green moss and surrounded by mist.

How was this waterfall mecca not yet on my set- jetting itinerary? As far as I can tell, the Gljúfrabúi waterfall, as it is called, has no movie credits. Perhaps it will make an appearance in one of the upcoming Iceland- backed top-secret flicks soon to hit theatres: Interstellar, Jupiter Ascending — and, rumour has it, maybe even one of the new Star Wars movies. (I think the Ewoks would feel right at home perched in the cliffs of Gljúfrabúi.)

HOW I SURVIVED NOAH‘S “APOCALYPSE”

I never expected to get an all-natural sand-and-salt exfoliating “facial” while in Iceland. But the morning I visited the famous volcanic-black-sand beach at Reynisfjara, where parts of Noah were filmed, the sky was dark and furious and sand-filled winds clocked in at 90 kilometres an hour. (I looked it up later — after my face stopped stinging.) The gusts made it difficult to walk — I had to bend my knees and lean into the wind so I wouldn’t get knocked over into patches of sand-covered snow…or be blown out to sea. The surf was so high that the imposing cave where Russell Crowe’s Noah wallowed post-ark landing (with lots of wine and little clothing) was inaccessible.

For most of the biblically set flick, the actors are pummelled by sheeting rain — and the wrath of God. I think I got a pretty good sense of how they felt. I was awed and exhilarated but also humbled. Still, I slowly made my way toward Gardar, a basalt cliff made of rectangular Tetris-like blocks that are crumbling off what looks like the side of an Egyptian step pyramid. (You can even spot this iconic site in the movie’s trailer.)

I did eventually make it back to my monster-truck ride, which was parked right on the sand. Phew, what a rush! But this par- ticular beach location is one of the few in the movie where the weather appears peaceful — shockingly sunny. Even that was deceiving. Crowe tweeted that in one scene shot on this beach, he went for a dip in the ocean. “I can’t describe the shock of cold,” he wrote. (The water was just 4.2°C.) The post went on to say he later learned that it was “the most dangerous beach in Iceland.” (The rip currents have been called “devious,” and swimming is strongly discouraged; the footage never made it into the film.)

Amusingly, the locals also refer to it as “Bikini beach” because it’s the southernmost point in Iceland. Nearby, there are cabins for rent, and a small hotel is under construction. If you watch Noah, you’ll see how magnificent — and less exfoliating — the place can be on a beautiful day.

Sleep where the stars slept
Any star who has filmed in Iceland has, at some point, likely made Hotel Ranga his or her home away from home. The rustic-luxe 51-room retreat has its own helipad, making it easy for A-listers like Tom Cruise to commute to the set.

Eat like the A-list
While filming The Secret Life of Walter Mitty, Ben Stiller spent a lot of time at Humarhöfnin, a seafood restaurant in the southern fishing village of Höfn, which catered for the crew. one problem? Stiller is a vegetarian. So he flew in Solla Eiríks, head chef of Reykjavik’s Gló, the capital’s top organic-raw-veggie resto, as his private chef — but he also became good friends with the owners of Humarhöfnin.

Tour the locations
Visit the steamy hotsprings cave where Game of Thrones’ Jon Snow and Ygritte first hooked up, as well as the lands where the White Walkers roamed on Iceland Travel’s five-day “Beyond the Wall” adventure. Or, opt for the seven-day self-guided The Secret Life of Walter Mitty driving tour (icelandtravel.is).

Dress like you’re on set
Channel stars like Emma Stone and Mia Wasikowska with a Canada Goose Mystique parka. The jacket got its name in 2003, when the X-Men costume department asked the Toronto-based brand to create a jacket to keep a blue-body-paint-coated Rebecca Romijn toasty off-camera ($795, canadagoose.com). Or, turn to 66°North, Iceland’s outdoor It brand, named after the latitudinal line that touches the island’s northern tip. Their toques have become a directorial staple on chilly Icelandic sets (66°N fisherman’s cap, above, $59, 66north.com).