Things to see, do and experience in this beautiful Tuscan city – even in the rain. 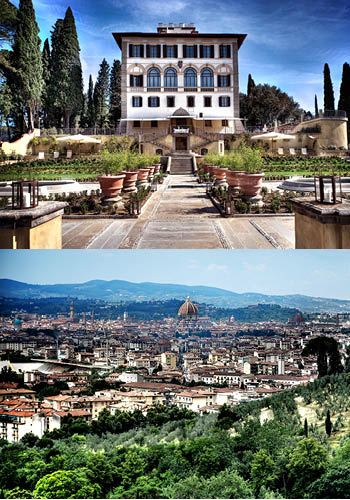 Stay at Il Salviatino (top), a beautifully restored 15th-century villa, for a quiet retreat with stunning views (below).

As I stand on the Ponte Vecchio, Florence’s famous bridge, I can almost feel the history under my feet. But I can also feel the rain pelting down on my head, so I dive under an awning – the 700-year-old bridge is one of only four left in the world that are lined with shops – and snap some pictures of the umbrella-topped vis­itors enjoying the scene. That’s the thing about this enchanting city: Even though it has been pouring non-stop since I arrived here two days ago, drowning out sightseeing, shopping and truffle hunting, I – and my fellow bridge admirers – still want to be outside.

Florence is full of obvious historic archi­tectural and design wonders. But, if you pay attention, there are countless subtler details from centuries past: Look up in a market and you might see a frescoed 18th-century ceiling; look down and you might find you’re walking on a mosaic floor that still looks beautiful after weathering two or three centuries of foot traffic. Even if the weather isn’t co-operating, here’s how to craft a perfect day in Florence.

MORNING Start at Mercato Centrale: two large floors of fresh local food. Downstairs is the market, with stall after stall of brightly col­oured fruit and veg, pasta, olive oils and vinegars, and upstairs is the prepared food: pastas, pan­ini, salads, cheese and gelato. I want to eat everything, but I limit my purchases to two tiny jars of truffle honey. (A month later, my family and I tuck into the honey, along with some cheese and bread and a glass of bubbly, and it tastes just as you’d imagine: that floral sweetness laced with a savoury earthiness. Amazing.)

Next, take in Piazza della Signoria, a buzzing square in the heart of historic Florence. Michelangelo’s David stood here for 369 years until it was moved inside the Accademia Gallery to protect it from damage; a replica now stands in the same spot. (The committee who ori­ginally decided where David would stand in 1504 included Leonardo da Vinci and Sandro Botticelli. Quite the crowd.)

AFTERNOON With centuries-old apothecary jars and tools lining its walls, the Pharmacy of Santa Maria Novella is required viewing. (Even the locals will tell you that.) Started by monks in the 13th century, it is the oldest pharmacy in the world and still produces many of the elixirs and perfumes that made it the official pharmacy to the Medicis in the 16th century.

Next, head to shoe mecca Aquazzura, just a short walk from the Ponte Vecchio, to pick up the ultimate Florentine souvenir. The shoe brand’s only store is actually in a 15th-century palace that was purchased in the 18th century by the Corsinis, a powerful family in Florence at the time. The marriage of original details (frescoed ceiling and gilded doors) with modern updates (plush sofas and sculptural light fixtures) makes the space as beautiful as the shoes on display.

And then there’s the Duomo. Even if you have seen dozens of cathedrals around Europe, this one will take your breath away, mainly because of its pink, white and green marble facade and large red dome, which can be seen from almost any vantage point in the city. It shares Piazza del Duomo with the Baptistery, which is smaller but also impressive – its gilded-bronze doors were dubbed “the gates of paradise” by Michelangelo.

EVENING There’s no written menu at Cibrèo in Florence’s historic centre – the manager simply pulls up a chair and tells you what’s cooking. You won’t get pasta here, but the authentic Tuscan cuisine – from polenta to meatballs to potato and ricotta soufflé – are must-tries. And the raspberry tart was so good, we ordered a second round.

DAY TRIP Tuscany is known for truffles – that pungent, almost garlicky tuber that you either love or hate. I love them. About a 15-minute drive to a hilly verdant area overlooking the city is a truffle academy run by “Giulio the Truffle Hunter.” With his faithful dog, Edda, who is trained to sniff them out, he takes guests truffle hunting. He shows me a specimen the size of my fist – weighing in at 220 grams, it’s one of Edda’s biggest finds and will fetch around $500. But when we drive up to the nearby forest, the sound of the heavy and unrelenting rain on the roof of the car has poor Edda shaking with fear. We don’t have the heart to make her get out and work, so we return to the academy for lunch: truffle bruschetta, truffle and bean soup, truffle omelette and truffle ice cream. Not a bad con­solation prize.

WHERE TO STAY: IL SALVIATINO
Damp days in Florence are still pretty good days—even better when you have a restored 15th-century villa (complete with frescoed ceilings, marble fireplaces and high-thread-count sheets) to retreat to. Il Salviatino sits high and regal on a hillside with postcard-worthy views. About four kilometres from the city centre, the 45-room hotel is a quiet escape after a day of sightseeing, and the regular shuttle into town takes only 15 minutes.

READ MORE:
The godfather of French Polynesia
Be still: How to experience the unexpected Zen of a staycation
The charms of Verona, Italy, in one day