One editor finds adventure and indulgence in Belize 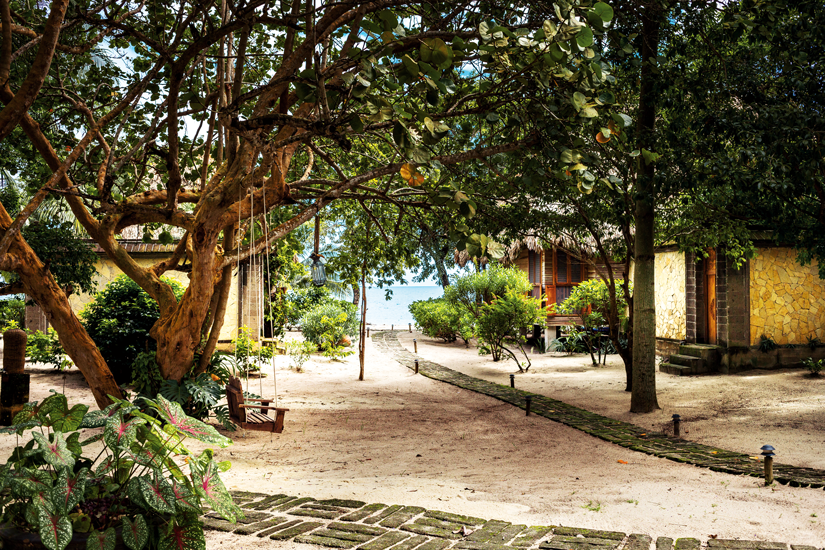 It’s 11 a.m. on the beach, and my friend has just suggested we open a bottle of rosé. “It’s not even noon yet!” I protest. “And?” she says. Good point. The bottle is almost gone by lunchtime.

I feel justified in taking on this level of indulgence because we’re on holiday in Belize. We’re winding down from the previous few days’ adrenalin highs (I’m pleased to report we were completely sober for zip-lining and waterfall rappelling) in the most picturesque setting: white sand, blue sea and sky and a smattering of palm trees leaning over the water’s edge just so.

The tiny Central American country appeals to visitors on two fronts: adventure in its wild and verdant interior and relaxation on its Caribbean coastline. Our bases for the week – a jungle idyll and a beachy haven – are both owned by one Francis Ford Coppola (who, by the way, has three other high-end properties, in Guatemala, Argentina and Italy), and they are duly luxurious in a laid-back, rustic way.

The author’s cabana at Blancaneaux Lodge. Image by: Ciara Rickard

Blancaneaux Lodge is a secluded oasis surrounded by mountains and lush vegetation in Cayo, near the western border of the country. Peppered with waterfalls, caves and Mayan ruins, this region is truly an explorer’s playground. And when we were done exploring for the day, our cabana’s private terrace and infinity plunge pool would lure us back.

The beach in Placencia. Image by: the Family Coppola

Turtle Inn, on the coast and farther south, was the perfect chaser after a few days inland. The resort’s 25 luxe thatched cottages are on, or just back from, the beach, and it’s a 20-minute walk (or a quick cab ride) from Placencia, a seaside village of colourful clapboard buildings, fairy-light-bestrewed patios and laid-back beach bars. The sea view from the veranda of my cottage will be forever imprinted on my mind.

BLANCANEAUX LODGE: IN THE AREA

The entrance to the Cave of the Crystal Sepulchre. Image by: Belize Tourism Board

CAVE OF THE CRYSTAL SEPULCHRE

This is a fascinating five-kilometre-long underground river and cave system where the Mayans performed ritual sacrifice around 700 to 900 AD. They believed that caves were the portal to the underworld and therefore a direct line to the gods, so that’s where they went to make offerings: bloodletting, the severing of limbs or digits and, when times were really rough, death. We entered through a small opening deep in the jungle and then waded through waist-high water, our headlamps spotlighting the stunning rock formations surrounding us. (Very Indiana Jones.) After about an hour, we reached “the Cathedral,” a surreal cavernous space that reminded me of Fraggle Rock (minus the singing puppets). Enormous stalactites and stalagmites cast eerie shadows on the walls while we took in the in-situ remnants of its dark past: hundreds of Mayan pots, the phalangeal bones of severed fingers and the calcified skeletons of 14 victims, including the “Crystal Maiden,” whose bones sparkle from centuries of calcite buildup.

The practicals: While you only spend about three hours in the cave, a visit here takes the better part of a day – it’s about an hour’s bumpy drive in (the tour operator will pick you up) and a 45-minute walk to the cave opening.

Ruins at the Mayan city of Xunantunich. Image by: Belize Tourism Board

Once we had learned how to pronounce the name of this Mayan city (shoo-nahn-too-nitch), we gave our calves a workout and scaled two of its major temples for vertiginous views and the de rigueur feet-hanging-over-the-edge photo op. Further ruins are still being unearthed at the site; in fact, archaeologists discovered the tomb of a high-ranking individual last summer. Around 10,000 people lived in Xunantunich at the height of its power, but it was abandoned by around 1000 AD. Today its buildings carry the echoes of Mayan life, but howler monkeys, iguanas, tarantulas and other wildlife have since moved in.

The practicals: This is one of the smaller Mayan sites, so you can cover it in a couple of hours. You don’t need a guide (especially if you rent your own wheels), but it does add to the experience, and you can book one through the hotel.

TURTLE INN: IN THE AREA

The author zip-lining in the Bocawina rainforest. Image by: Sunitha Shivakumar

“Not that many people die doing this,” joked our guide Wilson as he attached my harness to the zip line. His nonchalance actually did calm my nerves, and after one turn flying through the canopy 50 metres off the ground, I was hooked. We followed this adrenalin high with another: rappelling down a 35-metre-high waterfall. Looking up at the crashing water was one of the best views of the whole trip.

The practicals: This day trip is an hour’s drive from Turtle Inn, and transfers are included in the tour price.

A white sand beach in Placencia. Image by: the Family Coppola

THE BEACH AT TURTLE INN

Placencia is known for having the best beaches in the country: white sand, the calm turquoise sea and enough palm trees to hang the odd hammock. Our first day here was a super-chill cycle of reading on chaise longues, swimming in the bathwater-warm sea and refuelling at the Laughing Fish beach bar. A wobbly attempt at stand-up paddleboarding was the extent of the day’s exertions.

The practicals: The resort also has sailboats, snorkel gear, kayaks and water bicycles, and helpful beach staff are on hand to get you started. Scuba diving is also on offer, and you can do your training there if you aren’t already certified.