Learning how to make mukuluks

The Storyboot School is working to re-popularize the traditional art form. 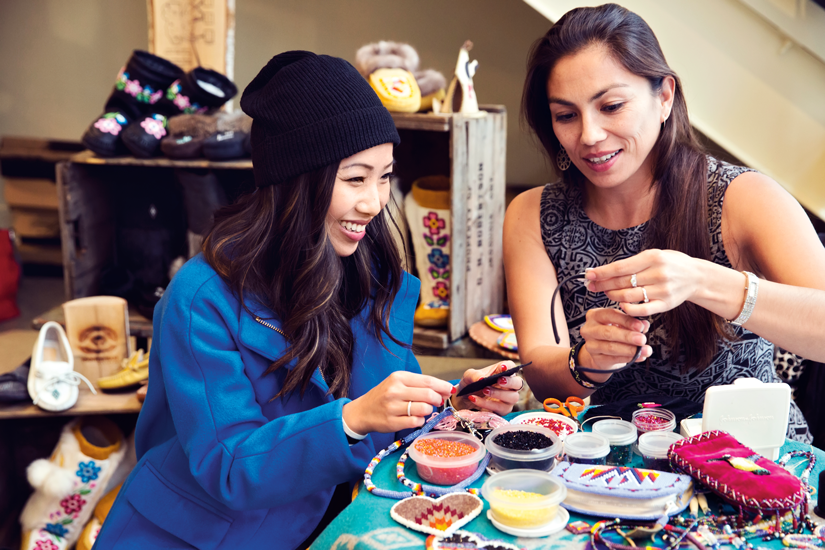 It’s a perfect sun-filled fall afternoon, but a group of students are already thinking about the cozy sartorial trappings of winter. They have come to Toronto’s Bata Shoe Museum to learn how to make a pair of the fur-lined suede mukluks that are traditionally worn by Canada’s Arctic indigenous communities and have become a symbol of both indigenous heritage and survival.

Against one wall of the room is a glass case filled with artisanal mukluks covered in intricate and colourful beadwork. Amid piles of suede, felt and synthetic fur, Ojibwa teacher Stephanie Pangowish, from Manitoulin Island, Ont., tells the group how her mother-in-law and aunt started teaching her beading and other traditional crafts after she had her first child. Waneek Horn-Miller, an indigenous advocate and Canadian Olympian (water polo), then talks about how this once-popular ancient craft (and highly practical winter footwear) is no longer being commonly passed down through generations of indigenous women. “If we don’t actively keep it alive, it won’t last,” she warns.

The Storyboot School, as this not-for-profit event is adorably named, was launched seven years ago by Sean McCormick, the Metis founder of Manitobah Mukluks, a 20-year-old company that makes moccasins and mukluks in partnership with indigenous Canadians. The goal of the project is to help encourage the traditional art of mukluk making – especially among Canada’s indigenous youth – in weekly sessions taught by elders. And thanks to a recent US$20,000 grant from the TreadRight Foundation, an inter-national not-for-profit organization focused on sustainable tourism, the program is free for First Nations students.

A diverse range of women – most with indigenous roots – break into pairs to measure their feet. “This is very intimate,” says one, as she advises her partner to leave enough room for one extra-long toe. “But at least we’re not making pants!” One of the two young men in attendance says he hunts with his family in the north and that mukluks are still the best, quietest way to track a moose. Cousins Tia Pettit and Melynda Kakepetum, both 22, say they grew up watching their grandmothers make mittens and newborn wraparounds in the fly-in community of Sandy Lake First Nations in northern Ontario. But Pettit and Kakepetum now live in Toronto – far from home in both distance and custom. Pettit, who watched her grandfather trap, skin and use every part of any animal he hunted, is hoping to one day teach her young daughter how to make mukluks. “It’s really important to connect with who you are and your ancestors before you,” says Kakepetum.

In addition to the event at Toronto’s Bata Shoe Museum, where six-class sessions are running quarterly until June 2017, there’s a permanent Storyboot School in Winnipeg (at Manitobah Mukluks’ head office). Manitobah Mukluks (manitobah.ca) also hosts pop-up schools at educational institutions across the country, most recently at Western University and McGill University.