Indulge in some of James Bond’s charms in Jamaica. 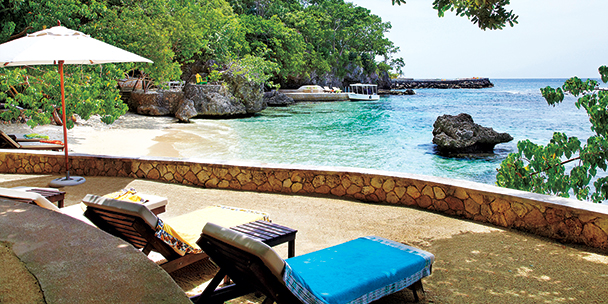 On my second day at the GoldenEye Hotel & Resort in Jamaica, I dived into the lagoon (spanned by a long, elegant footbridge) and swam to the dock of the resort’s spa. I could have walked to the spa, past the fig tree whose tangled roots fill a block of garden like a small house, or explored Fleming House – the elegant villa where Ian Fleming wrote all of his James Bond books – but I swam instead. I swam partly because I love swimming (I’d gladly do all my daily errands aquatically if I could) and partly for the thrill of pulling my bikini-clad body purposefully out of the clear blue water into the sunlight and onto a jungle-surrounded dock. What woman doesn’t want to be a Bond girl at heart?

Fleming fell in love with Jamaica while stationed there during the Second World War. He returned after the war and built the long white villa on a cliff overlooking the ocean. You can even visit the spot where he used to feed an octopus he called “Octopussy” from a rock that juts out of the water. The rest of the Goldeneye resort is a collection of smaller but equally luxurious cottages around the lagoon and the beach below. Despite the sly addition of all available modern comforts, none of the Old World glamour has been lost.

READ MORE: Following in the footsteps of James Bond in Jamaica

GoldenEye is an intensely romantic spot, and Jamaica, like the salt water in the lagoon, is impossible to resist. I swam three times a day – in the open ocean off the devastatingly pristine white-sand beach, in the partly shaded lagoon and in the saltwater pool – and each night under the kind of full moon the sky seems to give only to tropical islands. Like Fleming, who once said that he loved the island for “its peace and stillness and cut-offness from the maddening world,” I fell hard for Jamaica, and, like him, I’ll return.

BEYOND BOND
Fleming isn’t the only literary legacy in these parts.

British-born philanthropist Chris Blackwell, founder of the legendary Island Records, owns Goldeneye. He spent his childhood in Jamaica and now holds a 50-year lease on his own nearby estate, Firefly, which is also open to GoldenEye guests. Firefly was once the home of Noel Coward. “Noel would come to my mother’s for breakfast when I was a boy; he was terribly funny! We’d go to see his plays when they opened in London,” Blackwell told me as we were watching the sunset, just as Coward and his visitors, including Queen Elizabeth II, Laurence Olivier, Winston Churchill, Sophia Loren, Elizabeth Taylor, Alec Guinness, and of course, Ian Fleming, must have done.

When we has a young boy, Blackwell says he watched Errol Flynn step gracefully onto the dock after a water-ski outing – performed apparently effortlessly – with a cigarette in one hand and a small dog tucked under his arm. Blackwell knew immediately that water skiing was for him, He can be spotted daily out in the water.

STAY The tropical, casual, elegance of Fleming House has been replicated in the 20 cottages, suites and villas that make up the newly refurbished GoldenEye. Each cottage has a veranda and a secluded flower garden – complete with an outdoor rain shower.

DINE The resort’s Gazebo Restaurant overlooks the lagoon, which is magically under-lit at night, while the Bizot Bar is only footsteps from the beach. Both serve Jamaican-inspired cuisine featuring locally caught fish, seafood and organic produce. Most of the ingredients (including the best honey I’ve ever tasted) come from Blackwell’s farm, Pantrepant in the Jamaican hills.

SPA As I climbed out of the water, I was given a robe and a cool drink and seated on a lounge chair on the GoldenEye spa’s veranda at the water’s edge. Here, an expert masseuse bathed my feet in scented water before leading me to my harden room for a massage.