Bundle up for a polar bear safari in northern Manitoba. 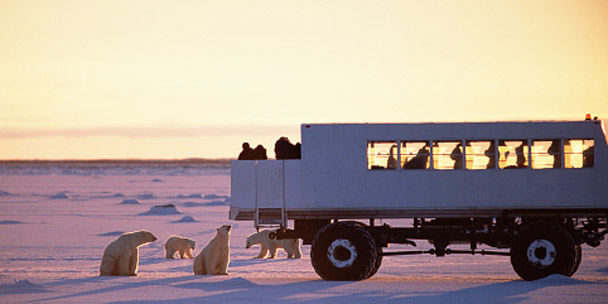 Edie Biddle was scanning for polar bear tracks out the window of the slow-moving Tundra Buggy when she saw something scamper through the willow bushes. “Stop! What’s that?” she called out to fellow visitors. Buggy driver Jim Baldwin hit the brakes, and two dozen Frontiers North Adventures guests, cameras in hand, scrambled to the right side of the massive vehicle to try to catch a glimpse of the creature.

“Where is it?” “I see it!” people cried out. But Biddle’s eagle eye hadn’t spotted a 1,000-pound bear; it was a 10-centimetre-long furry rodent. “Now let’s find the matching fox to go with it!” wisecracked Baldwin.

Like Biddle, we had all come to the frozen landscape around Churchill, Man., to see the great white bears. But the unexpected shrieks of our “great lemming moment,” as our group instantly christened it, temporarily eclipsed the bears. The tiny sighting even inspired a hashtag: After much debate, consultation with a guidebook and laughter, we concluded that the creature was actually a vole (because of its long tail), not a lemming. #itsnotalemming was born (Google it!), and a disparate group of visitors from as far away as Hong Kong and Australia and as close as Airdrie, Alta., and Toronto had officially bonded.

What I think prepared us for such over-the-top excitement about something so seemingly insignificant was that we were already giddy from seeing a whole bunch of bears. According to careful tracking by Frank Paca, a savvy and spry 92-year-old from Alexandria, Va., who was, by far, the oldest member of our group, we saw 57 polar bears during our two and a half days out on the chilly tundra (although his total likely includes some duplicate sightings).

But by any count, it was an ice-bear extravaganza — our early-November timing had been perfect. The nearby Hudson Bay was starting to resemble “the texture of a margarita,” as our guide, Hayley Shephard, put it, and was about a week away from forming a stable layer of ice. (As soon as the full freeze sets in, the bears head out to voraciously hunt ringed seals — their access to this primary food source is cut off when there is no ice.) So the usually solitary animals gather by this part of the seashore, one of the first places the ice forms, until their hunting grounds solidify. These are the conditions that have secured Churchill fame as the polar-bear capital of the world for a few weeks every fall.

BABY, IT’S COLD OUTSIDE It’s pretty fun to watch polar bears “hang out.” They don’t just sit around with their bums to the wind and their noses tucked under their massive paws (although they do look pretty cute doing just that); they spar — and I actually saw fur flying!

Here’s how it went down: The Tundra Buggy, which looks kind of like a giant Mars rover, pulls up to the bears. The buggy windows (safely set a good three metres off the ground) go down. Puffy jackets are quickly zipped up. Cameras are positioned. The play-by-play is in full swing.

Two young males are nose to nose. Their heavy exhalations hang in the air as they suss each other out. Soon, they’re up on their hind legs, jostling back and forth, kicking up snow. A platter-size paw lands a whack across the face. “Nice move,” someone calls out as the rest of us “Ooh” and “Ah” and the shutter-button clicking reaches a crescendo. Now it looks like they’re doing the tango — but it’s hard to tell who has the lead. “It’s a great bear hug!” says Steven Amstrup, chief scientist at Polar Bears International (PBI), who has joined our excursion.

A few minutes later, the bears are again nose to nose, but this time they are curled up together in the snow preening and “flossing” fur from their mouths. “They need to cool down after working up such a sweat,” says Amstrup. This might seem like curious behaviour, but the bears were not actually in a life-and-death battle. Sparring is their way of getting to know each other — to figure out who is dominant, he explains. That way, when they are out on the sea ice, they already know if it’s worth engaging in a high-stakes fight for food or a mate.

After eyeballing matches for almost three hours one day, we thought we had all the moves down. But the next day, a whole new kind of “combat” emerged. “It’s like pillow fighting,” said Shephard, as a female pair literally nuzzled and kissed each other throughout their sparring dance. “It doesn’t look like the boys’ club,” she said with a chuckle. That said, don’t underestimate the females — they will fiercely fight off larger males to protect their cubs.

FIRE IN THE BELLY Each night at dusk, our Tundra Buggy would dock with our space-station-on-wheels lodge, which was parked in prime bear-viewing territory. After dinner, Amstrup would tell us more about the curious habits of the bears.

He explained how incredibly mobile bears can be. Radio collars have revealed ranges of 600,000 square kilo­metres — larger than the Porcupine caribou herd’s — and how one female bear swam 687 kilometres over a nine-day stretch, likely searching for ice from which to hunt. “She lost 20 percent of her body weight during that swim — and her yearling cub,” he explained. “The bears would much rather walk than go in the water.”

Amstrup spent 30 years studying polar bears in Alaska before shifting his focus to conservation advocacy in 2010. “There is still research to do, but we know so much already. None of it matters if we don’t stop the rise in greenhouse-gas emissions, which is causing a rise in temperatures. If we don’t, we’re going to be polar bear historians.”

Still, Amstrup doesn’t think the species is necessarily doomed, and neither does Alysa McCall, a 28-year-old staff scientist at PBI who has spent several seasons collaring and tracking the western Hudson Bay bears. “I’m not sure how hopeful I am for the Hudson Bay sea ice,” she said. “I’m worried for these bears but hopeful for bears as a whole.”

LIGHT ’EM UP My last day out on the tundra began with a very early but very exciting wake-up call. “The northern lights are out!” cheered Shephard as she ran through the bunkhouse around 5 a.m. I went out on the deck and watched the swirling green bands flicker and fade and reappear in the dark, star-specked sky until the horizon ripened into vibrant tangerine and then softened into a fuchsia that made the snow­ — and the polar bears — glow pink. At other times, the bears had appeared icy white and creamy yellow, so I was fascinated to learn that polar bear fur actually has no pigment.

“It’s the colour of ambient light — it absorbs and reflects what is in the environment — and normal sunlight is white light,” explained Amstrup. We rushed out in our Tundra Buggy to try to capture shots of the bears in this perfect but fleeting light.

“I’m not sure I got good pictures, but it doesn’t really matter,” Sam Robbins, a 28-year-old Australian who’d made a solo voyage here to see the bears, told me. A decade ago, her mother, a teacher, had connected her classroom with this place through a PBI webcast featuring scientists who showed off live shots of the bears. “I always remembered that, and I wanted to see it first-hand,” she said.

CHURCHILL BOUND
With a population of just 813, this northern-Manitoba community is pretty sleepy — even during peak polar bear season in the fall. Must-sees include the Eskimo Museum, a cabinet-of-curiosities-style time warp with 1930s-, ’40s- and ’60s-era displays showcasing ancient artifacts that tell the stories of the Dorset, Thule and Inuit peoples — as well as the town post office, where you can get a polar-bear stamp in your passport.