Why is jamón ibérico de bellota the haute ham of choice for foodies? 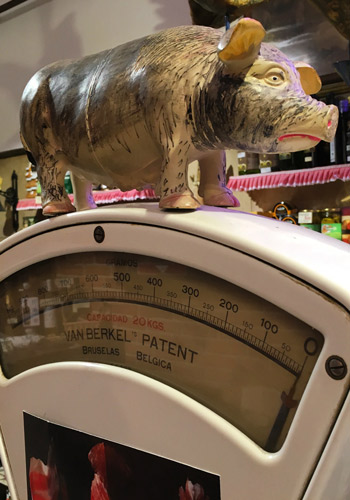 It is safe to say Alberto Lopez is a leg man. I watch him as he appraises a silken gam, his bespectacled eyes narrowing as they scan the length of the limb, nodding approvingly. “Here,” he says, gesturing me to lean in closer.

“You can tell this is a good one,” he says. “Look at the hoof. It’s dark and sharp-edged.” Although it sounds like Lopez is describing a stiletto, he’s actually just giving me a primer on Spanish ham: namely, jamón ibérico de bellota.

But before I’m permitted to sample, Alfonzo wants me to understand what I’m about to experience because this third-generation butcher takes his ham seriously. His shop, López Pascual, in Madrid’s Malasaña area is famous for its Jamón Ibérico and its Jamón Ibérico de Bellota.

“You know it’s good ham if they have slim ankles,” he explains. “And you know you are having true iberico ham when it has a black hoof or as we say in Spanish, pata negra.”

The Bellota ham is the special because the pigs have only eaten bellotas or acorns rather than corn. It’s considered the haute couture of ham and it costs upwards to $350 per kilo.

These are important distinctions. The slim ankles and sharp hoofs speak of this black pig’s life in the country-side; scrambling around “ribeiros” or riverbanks, movements unhindered by pens or feedlots. “Because they are active,” Lopez explains, “the pigs’ fat is worked in to the muscles, instead of accumulating on top, like their flabby white-pig cousins.”

The hock that Lopez is now showing me has an oily sheen. “What does that mean?” I ask. “This is desirable,” explains Lopez, “because it means the pigs had an acorn-rich diet. True afficionados, he tells me, can detect the region based on flavour. A Huelva pig will have subtle differences from, say, a Balajoz pig, owing to otherwise hard-to-detect changes in soil and climate.

Like fine wines, the hams are aged for between three to five years. They are usually killed in January and buried in salt. The formula, says Lopez, is one day for every kilogram of weight. Then shops and tiendas all over Spain are festooned with legs, hanging from hooks, waiting to be selected, put in a jamonera (essentially locked in place for slicing) sampled and sealed.

Lopez takes a long, slightly arched bone and uses its sharp end to pierce a ham, near the hip joint. He withdraws it and holds it under my nose, indicating I must smell it. “It’s earthy, pungent and definitely not like cold-cuts I’d have a home,” I laugh.

“That’s the smell you want,” he smiles. “It is a special aroma. You know you’re having the best.”