Two ELLE Canada editors recently travelled to Berlin (and won't stop talking about it). Here are their picks for the best food, shopping and neighbourhood haunts in the German capital. 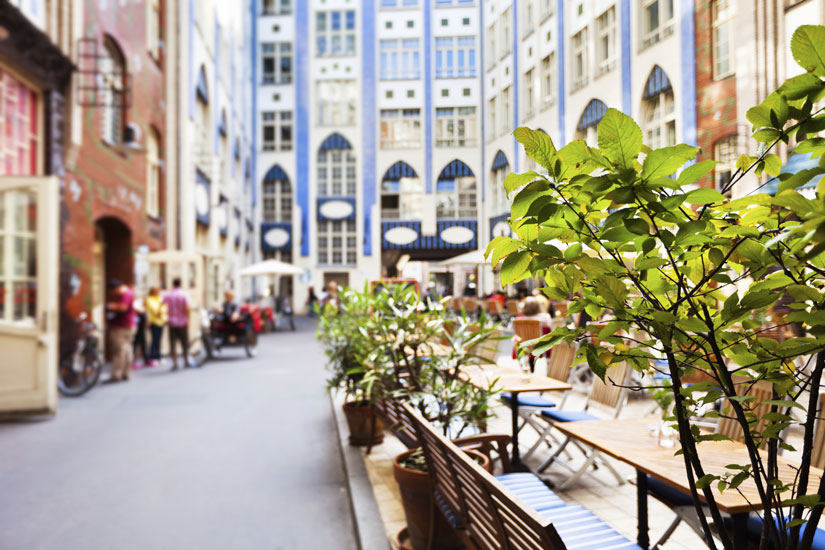 The first thing I’ll say about Berlin is this: go in your 20s. Take it from a wise 30-something-married who visited the German capital for the first time this year. While it was an indulgent and romantic – I’ll get to that later – had I gone as a single person, I know I would have seen a whole new side to the city.

Let me start by imagining what the 23-year-old version of myself would have gotten up to.

First, I’d stay in the boho-hipster Friedrichshain district. I can tell you without hesitation that this is a cool area because I felt super uncool while strolling through it. (Thanks, Breton-striped dress, floppy sun hat and lack of tattoos!) This area is in East Berlin, so the architecture is serious. Start near Frankfurter Tor and walk along Karl Marx Str for the best sights. There are also lots of places to chill with a Radler – check out the Volkspark Friedrichshain and the Treptow Park. (The latter is in neighbouring Treptow- Köpenick and the Soviet Memorial here is otherworldly.)

The other thing I would do is go to clubs, lots and lots of clubs. One club I didn’t go to was Berghain, which I imagine is the most intimidating place in the world other than Miranda Priestly’s office. Located in a former power station, it’s open 24 hours. That’s ALL TECHNO. ALL. THE. TIME. It’s also super difficult to get into – you have to line up for eons and then can be turned away in a second at the door by surly bouncers. But it’s worth a try for the experience alone. For some more low-key options, try the Prince Charles, which, according to a friend who lived in Berlin forever, is a smaller joint with an L.A. feel and a gorgeous courtyard. He also sang the praises of Ipse, a club on the water with an “old-school carnival vibe.”

Okay, now for what I actually did: (Outside the touristy stuff, you can Google that yourself.)

We rented an AirBnB in Prenzlauer Berg, which is north of Mitte. (Mitte is the more central, touristy area.) Prenzlauer Berg is super chill – there are lots of cafes and bars (try Bar Becketts Kopf for crazy good cocktails) and cool vintage shops and indie boutiques. You could probably spend days just exploring this hood. If you’re with your honey, grab some pastries and an espresso and nibble on them at the Wasserturm Prenzlauer Berg, which is the oldest water tower in Berlin and surrounded by a lovely park.

My husband likes to go to museums; I like to shop, so we indulged each other to avoid any vacation fights. He picked the Egyptian Museum. I got to go to Bikini Mall (read Liz’s description for more) and we also tracked down this v. v. cool vintage shop, Garments Vintages.

Our relationship is also based on a mutual affection for booze and good food. Near Bikini Mall is the 25hours Hotel Bikini Berlin. It reminded me of The Standard Hotel in Meatpacking. Take the elevator all the way to the top and visit the Monkey Bar, which overlooks the Berlin Zoo. Cocktails are pricey but worth it. We pretty much ate our way through every neighbourhood in Berlin. Some of our faves: Katz Orange (perfect for date night; try the burrata, it’s the bomb.)

Surprisingly, we also ate a lot of pizza in Berlin – the best was at Due Forni in Prenzlauer Berg. And, if you’re watching your pennies, Imbiss 204, also in Prenzlauer Berg, has the best authentic German food for under 10 euro. By the time I had stuffed myself with schnitzel and kartoffelsalat – German potato salad – and we strolled back to our little apartment, I didn’t feel bad about not going to a single club. There’s always my 40s.

I look back my trip to Berlin with great fondness for two reasons. First, I was there during fashion week, which meant getting to attend shows held in florid 18th-century palaces (Berlin has many of these), discovering cool labels like Dorothe Shumacher and Michael Sontag and getting recommendations from local fashion insiders on the best shopping spots. Second, my mother grew up in East Berlin in the ’70s and after a wildly expensive cab ride past the longest remaining stretch of the Berlin Wall (very cool) I tracked down her old house and school. But since you probably don’t care about the park where my mom learned to roller skate, here are my suggestions for the best high-end and vintage shopping.

Berlin is a perfect vintage shopping city. The selection isn’t costume-y and the stores are well curated and chill. And there are just so many boutiques! You’ll probably stumble upon at least one store while wandering the city’s cool neighourboods, but being vintage obsessive I left nothing to chance and tracked down the shops ahead of time. My top two picks are Neuzwei and Let Them Eat Cake, both located on Weserstraße in hipster-y Neukölln. These shops carry a lot of ’80s and ’90s era pieces with a minimal, feminine feel.

Bikini Berlin (it gets its name thanks to the layout, which features two enclosed areas with an open-air space in the middle—like a bikini) is one of the coolest concept malls in Europe. On the lowest floor, you’ll find small pop-up spaces taken up by up-and-coming brands. Also worth checking out is the Labo Art store. This Berlin-based brand ethically produces crisp cotton basics with slightly unusual silhouettes—think cocoon dresses and oversized button-downs. While you’re at the mall, head up to the open-air space for a drink with a view of the neighbouring Berlin Zoo.

Shapes are key here: @labo.art is constantly experimenting with new silhouettes. And also with colours. Blogger @la_lali took a look around the store here at Bikini Berlin and tried on a few of their designs. Read more on our website Journal.

If you only go to one store in Berlin, make it Voo Store. This boutique is the definition of cool (yet somehow isn’t intimidating) and carries an incredible edit of brands like Loewe, Rejina Pyo, Re/Done and Canadian label Beaufille. There’s also an adjacent café, so if a new pair of Acne boots isn’t in the cards you can treat yourself to a flat white and flip through an indie magazine. Still, I’d leave room in your suitcase.

Voo Store is closed today but you can explore our selection online at www.vooberlin.com