How to discover Croatia's alternative appeal

Yachts and parties aren't the only thing on offer. 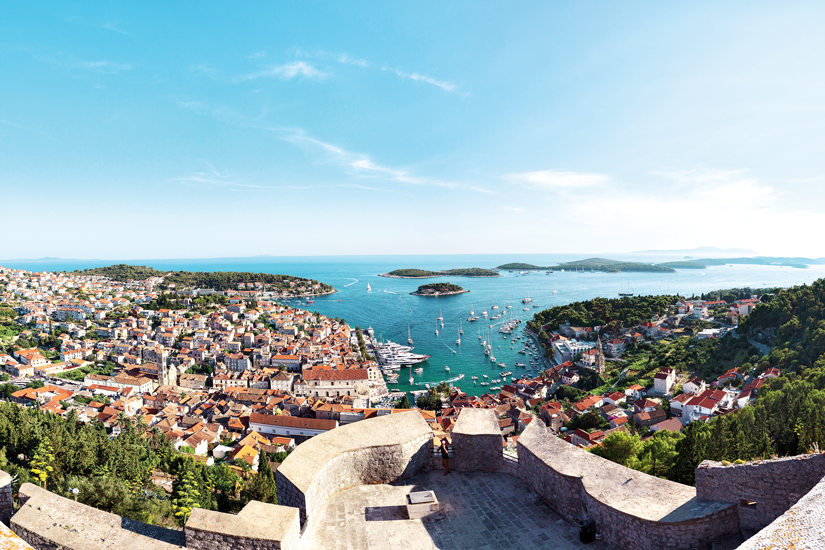 On the third day of my week-long journey through Croatia, I picked up a local phrase: “Ste uzimanje masnoća iz mene” – or “You’re taking the fat out of me.” Although the literal translation sounds like something you’d say to your personal trainer, it’s actually a lighthearted way to say “You’re making me jealous.” And that’s exactly what I was doing, according to my friends via Snapchat, as I shared a play-by-play of my day exploring Hvar – a ruggedly picturesque island off the country’s southern coast.

The port at Hvar Town. Image by: Getty

Hvar’s draws are plentiful: secluded pebbly beaches, weather so sunny it borders on obnoxious and a wine-making legacy dating back more than 2,000 years. The most famous feature of all, however, is the pretty 13th-century port town that shares the island’s name. Thanks to the surge in the Croatian Riviera’s popularity as a summer getaway spot, Hvar Town has earned a reputation for two things: yachts and youth. The former, moored in Hvar’s rocky inlet, are unapologetically lavish (who needs a helicopter pad?), while the latter emerge at night and travel in packs toward the neon lights and thumping beats emanating from the clubs that hug the island’s shoreline. Hvar Town is party central.

The writer in Hvar.

Which is why my guide, Sinisa, took it upon himself to show me “secret” Hvar with an off-road tour of the parts of the island that are often overlooked by visitors and locals alike. So while the previous night’s revellers were still sleeping off their après-beach apricot radlers, I was in Sinisa’s road-battered Toyota 4Runner, driving down dusty paths flanked by olive trees, in pursuit of Hvar’s alternative attractions.

The village of Malo Grablje.

The first stop was Malo Grablje, an eerily idyllic ghost village located in the island’s interior. The tiny settlement was largely abandoned in the 1920s when the local grape crops failed. In the early ’50s, the last holdouts – a man and his goat – finally packed up and moved on. The crumbling stone houses are overgrown with wild capers; it seemed like the village was under a spell and that life would resume if I simply pressed a “play” button. I imagined that the communal olive press would start up again and an elderly man would appear to ask what I was doing in his yard, his goat giving me the side eye.

After a brief stop at the nearby straight-from-a-postcard village of Velo Grablje (not quite abandoned – population: seven), it was time for another perspective. I bounced in my seat as we drove up a precarious cliffside path to Sveti Nikola, Hvar’s highest peak, and its tiny chapel and even tinier weather station. From the 628-metre height, the Adriatic appeared boundless beyond the bulging tops of the neighbouring isles Brac and Vis on one side; on the other, Hvar’s craggy landscape, with its ancient vineyards and sleepy townships, opened up before me. They are views you could never see from the deck of a 60-metre yacht, and I revelled in the fact. Then, the “aha” moment: I figured out what the helicopter pad was for. It was my turn to feel jealous.

ON THE WAY: ZAGREB AND SPLIT

One way to get to Hvar is to fly into Zagreb and then take a boat from the southern port town of Split. Here’s how to make the most of your time.

MORNING Grab a cheese bureka (a flaky savoury pastry) in the city’s Lower Town neighbourhood and claim a bench in the verdant Ribnjak Park, a quiet spot hidden behind Zagreb Cathedral. Then, after a brief stop to admire the ornate art-nouveau facades of Ban Jelacic Square, climb the stairs to Upper Town, the city’s historic heart. The coloured-tile roof of St. Mark’s Church is a must-see.

AFTERNOON Head to the Dolac open-air food market, known as the “belly of Zagreb,” for lunch. On the menu? Whatever catches your eye, like nutty sheep cheese with lavender honey. For shopping, check out the Croatian Design Superstore. The name is a bit misleading (the shop is more quaint boutique than Costco), but it’s well stocked with local designs. You’ll find leather accessories by Kon2re and zany printed sweatshirts by Ana Krolo.

EVENING Book a table at Vinodol’s walled-off terrace in Lower Town. Peka, a traditional Croatian meat-and-veggie dish cooked under a cast-iron dome, pairs nicely with a glass of the country’s underrated red wine made from indigenous high-altitude Plavac Mali grapes.

LATE NIGHT Finish your day the same way you started it: at a park. Zrinjevac comes alive at night, with couples and families coming out for a starlit stroll under the plane trees. If you’re still hungry, try some freshly grilled corn from one of the street vendors.

EXPLORE Diocletian’s Palace was built in the fourth century by one of the few Roman emperors to enjoy retirement. Some 1,700 years later, the Unesco World Heritage Site served as home to Daenerys’ brood of dragons. But you don’t need to be a classics nerd or a Game of Thrones fan to appreciate the labyrinthine halls, which are packed with restaurants, shops and people.

A view of Split from Marjan Forest Park. Image by: Istock

HIKE Marjan Forest Park is just steps away from Split’s main strip. If you’re up for a bit of a walk, the pine woods are worth breaking a sweat for. They look dark and imposing from a distance, but the hilly hike offers an escape from the bustle of the town’s high-traffic port and some of the best sea views in the area.

EAT Set in an old hardware store in Split’s historic Old Town, trendy Bokeria is the go-to for elevated Mediterranean fare – think risotto with pesto and capers and sea bass ceviche made with local ingredients.

HOW TO GET THERE

FLIGHT PLAN Air Transat offers flight and hotel options for two- or three-stop stays in Croatia. I chose the three-stop option (Zagreb, Split and Hvar) and found that I had enough time to seek out adventures despite the multiple transfers.

WHEN TO GO July is considered high season; expect crowds of bacchanals wherever you venture. A visit in late August will find the beach towns winding down for the season.