How to actually have fun at Coachella

For those of you who hate music festivals, crowds and especially flower crowns. 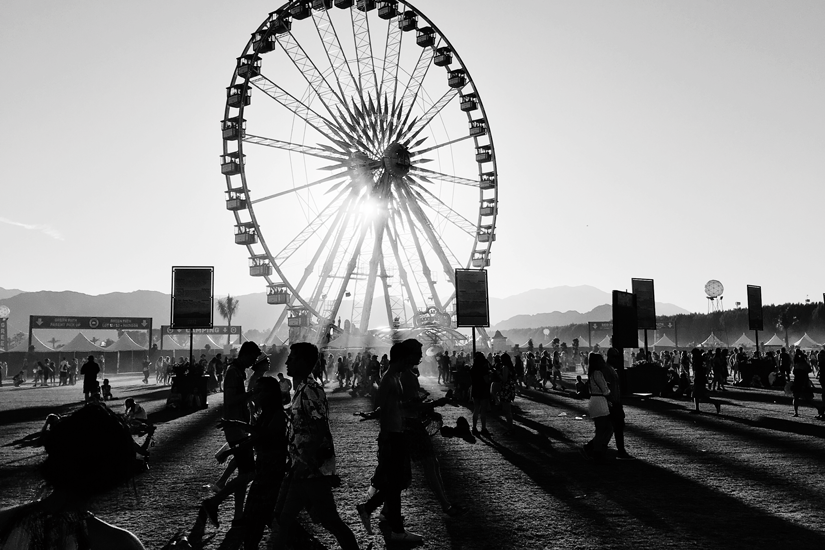 You know how Coachella is, like, the funnest thing ever? How, if you go, you’ll be united with all of humanity through the power of music (and other substances), fringed clothing and a giant beating heart of good vibes, the valley’s iconic mountains cradling everyone like a great granite drum circle? How, like the oft-photographed Ferris wheel, your weekend will be one endless round of highs and, later, your memories of it will be saturated as though with the Valencia filter?

Or, you know, maybe you’ll end up like I did on day two of Coachella: in the middle of a giant field, hot and dusty, fighting my way through a crowd that seemed entirely composed of people in panda costumes. I eventually found myself at the Sahara stage, questioning all the life decisions that had led me there, my soul rubbed raw by hours of close proximity to strangers. Behind me the sun was setting to dramatic effect over the “Besame Mucho” sign, casting long shadows across ground that had been walked bald by thousands of gladiator-sandal-clad feet.

The “Besame Mucho” sign is a must see. Image by: Getty

To be fair to the annual music and arts festival, headlined this year by Lady Gaga and in 2016 by LCD Soundsystem and Calvin Harris, I had absolutely no business being there (despite it being my beat to cover music and my being a big fan of many of the acts on offer – shout-out to Courtney Barnett, AlunaGeorge and Chvrches). My ability to lose myself in the moment is unusually poor, my version of a high is two handfuls of Smarties and I really can’t pull off any kind of feathered headdress. (Cultural appropriation and round faces just don’t mix, I suppose.)

Yet despite some low moments (a misguided attempt to blend in by braiding my hair stands out), I found a way to enjoy myself. (Such hardship!) Because it might happen to you (even the most self-aware of introverts can be seduced by Insta and the possibility of witnessing Leo’s annual off-site-pool-party appearance), I’ve put together a little guide to “getting over yourself and enjoying everyone else’s favourite music festival like a normal person.”

Avoid the crowds with a VIP pass. Image by: Getty

GET A VIP PASS. Yes, it will cost you $1,175, but this wristband gives you access to a rarefied world on the edge of the festival: dining areas that are separate from the masses, less-trafficked washroom situs and reserved areas at the front of the stages, which means you can arrive two minutes before Sia goes on and stand second row. Most important, it gives you ample opportunity to bump into actual VIPs – in my case, a One Directioner, Jessica Paré swaying to M-83 and Jaden Smith everywhere.

The Safari campground is glamping at its finest. Image by: Getty

PITCH YOUR TENT. Hear me out: “Glamping” at the Safari campground is your smartest accommodation option. What the VIP compound lacks in truly luxe amenities (the tents do have two double beds and AC) it makes up for in convenience. Because it’s on the grounds, you can dip in and out of the festival, taking breaks to relax in Safari’s blessedly cool lounge tent. (They also lay out breakfast and a midnight spread.) It also means you can lie in your tent, tucked up in bed at 10 p.m., and still hear Guns N’ Roses shredding it on the main stage nearby. ($9,812 for two people for four nights; includes VIP pass)

PLAY TOURIST. Visits to civilization are key, if only to remind yourself that there is a world out there where a weed gummy isn’t a generally accepted bit of currency. I took two day trips during the three-day-long festival and found serenity in the genteel, manicured town of Palm Springs, a literal and metaphorical oasis of mid-century-modern architecture and celebrity vacation homes. (Book the Palm Springs Modern Architecture Tour if you’d like to learn about the A-list residents, past and present.) Not quite as close but worth the hour-long drive is Joshua Tree National Park, a trippy desert moonscape dotted with the eponymous trees that feels like a Dr. Seuss book come to life.

This is just an example of the bizarre trees you’ll see in Joshua National Park. Image by: Getty

EAT YOUR FEELINGS. Grazing your way through the range of food offerings at Coachella is recommended. Thanks to its proximity to L.A., the festival attracts pop-up versions of the city’s coolest restos. My number-two moment of the weekend involved three scoops of cookies-and-cream from Afters Ice Cream, a brick wall and Jaden Smith walking past (again).

The food selection at Coachella is an attraction in and of itself. Image by: Getty

DON’T DO IT FOR THE ‘GRAM. I barely took any pictures while I was at the festival, which brings us to my number-one moment of the whole adventure. It came at the end of night two, and I was on a golf cart, which is how you get ferried between the festival and the Safari campground. We were picking up speed, whizzing through the behind-the-scenes area of the festival, past generators and tour buses. The wind picked up my hair off my neck, and I kicked my legs out in front of me, feeling a kind of silly glee that I’d probably last felt as a child on a swing. It was an entirely un-Instagram-worthy moment, but it did feel like, for a beat, I’d found that great collective joy Coachella is famed for. And you know what? It wasn’t, like, the worst thing ever.