Going beyond the Mayan ruins in Guatemala 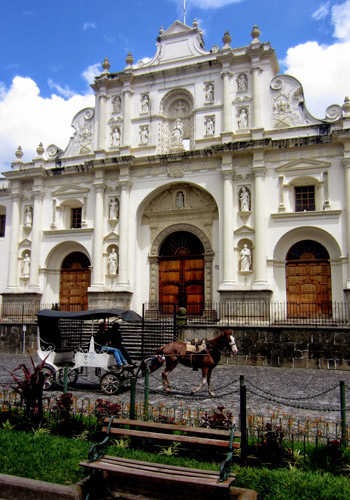 The clap clap clap of women making tortillas with their hands resonates through the air, but it doesn’t tempt my appetite – I’m on a shopping quest. It’s market day in Santa María de Jesús, a town tucked into the slopes of the Agua volcano, a 15-minute drive outside of Antigua, Guatemala’s colonial capital. In the blur of green – the spiky tops of pineapples, pyramids of limes and leafy bundles of cilantro – I’m on the hunt for huipils. These are the loose-fitting, brightly coloured embroidered blouses that I’ve been spotting on most of the Mayan women here and virtually everywhere I’ve been in this Central American country. I’m not going home without one of my own.

I make my way to the heart of the market and finally spot an elderly woman sitting beside tall rainbow-hued stacks of the blouses. It doesn’t take me long to find “the one,” a pumpkin-coloured top with embroidered green and hazel birds. I hold it up to my body to show the woman my interest as I pull out a crumpled stack of quetzals (the local currency) and start saying numbers – “Cien? Doscientos?” – in my terrible Spanish. This proves futile, as the woman’s first language is the regional Kaqchikel. Suddenly, she snatches the blouse back from me, protectively clutching it to her chest while shaking her head. I stand there, confused – and the cynic in me begins to wonder if this is just her method of bargaining – until a neighbouring vendor gives her a nudge, and she eventually concedes to sell me the blouse.

READ MORE: Where to stay and play in Panama City

As I walk away, I am delighted to notice that the town’s central church is painted the same cheerful orange as my new huipil – and I decide that what I’m going to choose to remember is that the original owner of my blouse cherished it. While I won’t wear it tucked into a striped woven skirt, as the Mayan women do, and its design won’t tell the story of which region I come from, as it does for the local residents, it will be a reminder of this quaint town perched on the shoulders of one of the country’s 33 volcanoes.

Earlier in the day, I actually got to climb one of these volcanoes, the nearby Pacaya, which was active last March. (Yikes!) But after careful checks by my guide, we were cleared to climb – and even roast some marshmallows over a steaming natural vent. As he handed me a twig to spear them with, I knew this would become another sweet memory of a country that never stopped surprising me.

A PERFECT DAY IN ANTIGUA

Antigua – a UNESCO World Heritage site located in the country’s highlands – has many rules in place to maintain its exquisite Spanish colonial vibe. Number one: no traffic lights – in a city of 30,000 residents. I must be extra-careful when crossing the street or I might encourage motorists in speeding tuk-tuks to break rule number two: no honking. (This doesn’t keep things completely quiet or stuck in a time warp, however; at one point, I was surrounded by the chatter of tartan-clad schoolgirls talking on their cellphones.) Rule number three is my favourite: The facades of the city’s simple two-storey houses must be painted one of 10 approved colours, which date back to the 1600s. I turn this rule into a game and try to spot all 10 of the bright hues. I find a favourite, a cheerful forget-me-not blue called “celeste colonial,” but I lose my colour count somewhere around number eight when I forget to look both ways before crossing the street – I’m too enchanted by the hidden courtyard fountains and smiling locals. Here’s how I spent my day:

MORNING After I grab a frothy latte at the Refuge, a café and micro-roaster that makes its coffee from beans grown in Guatemala’s highlands, I head to Catedral de San José, the city’s grandest baroque church. Its interiors were reduced to ruins by an earthquake that devastated the city in 1773 – but because it is still being painstakingly restored, I can stand inside and look up to see patches of blue sky in place of domes.

AFTERNOON The city’s tree-lined central park is eye candy. I eavesdrop as Spanish tutors converse with their pupils on a nearby bench. And I crave ice cream when a seller strolls by. For lunch, I head up a steep hill to eat mint-pesto chicken, heart-of-palm salad and nutty tortillas at chef Mario Campollo’s El Tenedor del Cerro restaurant (which translates to “the fork on the hill”). From here, the city below looks small enough to fit on my plate.

EVENING I stop in for a glass of Chilean Merlot at Cafe Condesa, a royal residence built in 1549 that has been turned into a popular café overlooking the city’s central square. The café is oddly proud of its spooky past, which involves a jealous count burying his wife’s lover alive in the walls of the house in the 18th century. (They found and removed the skeleton in the 1970s.) I’m hoping to bring back tales of ghost sightings, but apparently an exorcism performed in the 1990s seems to have eliminated my chances of a supernatural encounter. Done for the day, I head to the Hotel Mansión de la Luz, a colonial mansion turned seven-room boutique hotel. I put my heavy brass key in the lock (no magnetic cards here!) and let the sounds of the property’s indoor fountain lull me to sleep.

READ MORE: The top 5 things to do in Dubai

MUST-SEE: THE RUINS OF TIKAL

A 45-minute flight from Antigua brings me to the province of Petén, home to Tikal National Park and the ruins of one of the most important cities of the pre-Columbian Maya, some of which date back to the 4th century BC. The jungle has reclaimed most of this once-great settlement – many of the limestone pyramids are overgrown with vines and covered in centuries of soil – and as I walk through the crumbling temples and palaces, spider monkeys look down at me with indifference from their homes in the impossibly tall ceiba trees above. After a 70-metre climb up a creaky scaffold staircase, I reach the top of Temple IV, the tallest remaining pyramid in the Mayan world, and I’m rewarded with a view of endless green canopy (I’m convinced I can see as far as Belize), pierced by the tops of other surrounding pyramids. On my way out of the park, I look twice at every dried log and fallen tree, hoping to spot an anteater or a jaguar, but I have to settle for the farewell call of a toucan.

After exploring Tikal, I escape civilization (Mayan or otherwise) at the nearby Las Lagunas boutique hotel. This secluded retreat has 12 cowhide-clad cabins that are cantilevered over the Quexil Lagoon, and each one has a private hot tub. I relax on my deck while keeping a close eye on the lagoon’s resident crocodiles in the water below.

A bumpy two-hour drive from Antigua, Lake Atitlán is cupped by 21 verdant volcanoes and dotted with a dozen charming villages. From Panajachel, one of the biggest lakeside communities, I hop in a bathtub-shaped motorboat and cross the choppy waters to explore.

The Tz’utujil Mayan men in Santiago wear striped trousers embroidered with hummingbirds and flowers. The more embroidery, the higher their social status. My biggest regret? Not picking up a pair for myself.

The flower-lined footpaths in this town (which was a famous hippie haven in the 1960s) lead to meditation camps and massage centres offering reiki and energy healing.

San Pedro La Laguna: A trip back in time

Spend a day learning traditional backstrap weaving techniques, cooking tamales and fishing in a canoe carved from a tree trunk.

This fishing village also specializes in ceramics. On a sunny day, you can spot hundreds of pots drying on rooftops.